What’s the Fed Put and Does It Mean the Stock Market Will Rally?

Traders and analysts are once again wondering if the Federal Reserve will provide the “Fed put” that can potentially limit the down side of a stock market sell off.

In this case, the term “put” refers to a put option, which is an option that increases in value when prices fall. The idea of a Fed put dates back to the chairmanship of Alan Greenspan who sat at the top of the Fed from 1987 to 2000.

“During Greenspan’s chairmanship, when a crisis arose and the stock market fell more than about 20%, the Fed would lower the Fed Funds rate, often resulting in a negative real yield.

In essence, the Fed added monetary liquidity and encouraged risk-taking in the financial markets to avert further deterioration.

The Fed did so after the 1987 stock market crash, which prompted traders to coin the term Greenspan Put, later termed moral hazard. In 2000, Greenspan raised interest rates several times. These actions were believed by some to have caused the bursting of the dot-com bubble.

The Fed also injected funds to avert further market declines associated with the savings and loan crisis and Gulf War, the Mexican crisis, the Asian financial crisis, the LTCM crisis, Y2K, the burst of the internet bubble, the 9/11 attacks, and repeatedly from the early stages of the Global Financial Crisis to the present.

The Fed’s pattern of providing ample liquidity resulted in the investor perception of put protection on asset prices. Investors increasingly believed that in a crisis or downturn, the Fed would step in and inject liquidity until the problem got better.

Invariably, the Fed did so each time, and the perception became firmly embedded in asset pricing in the form of higher valuation, narrower credit spreads, and excess risk taking.

[Nobel Prize winning economist] Joseph Stiglitz criticized the put as privatizing profits and socializing losses and implicates it in inflating a speculative bubble in the lead-up to the 2008 financial crisis.

In 2007 and early 2008, the financial press had begun discussing the Bernanke Put as new Federal Reserve Board chairman, Ben Bernanke continued the practice of reducing interest rates to fight market falls.

Proof of a Fed Put

Economists at the University of California considered the question of whether or not the put exists or simply a legend created by Wall street traders. In a paper called “The Economics of the Fed Put,”

Using textual analysis of FOMC minutes and transcripts, we argue that stock returns cause Fed policy and document the mechanism underlying the relation.

Consistent with a causal effect of stock returns on policy, FOMC participants are more likely to mention the stock market after market declines—a pattern that arises from the mid-1990s—and the frequency of negative stock market mentions in FOMC documents predicts target rate cuts.

The FOMC discusses the stock market mostly as a driver of consumption and, to a lesser extent, investment and broader financial conditions. Less attention is focused on the stock market simply predicting (as opposed to driving) the economy.

In a Taylor rule framework, about 80% of the Fed’s reaction to the stock market can be explained by the Fed revising its expectations of economic activity down following stock market declines.

The Fed’s expectations updating is roughly in line with that of private sector forecasters and with the stock market’s predictive power for growth and unemployment.”

The stock market does appear to be a popular topic of discussion at Fed meetings. 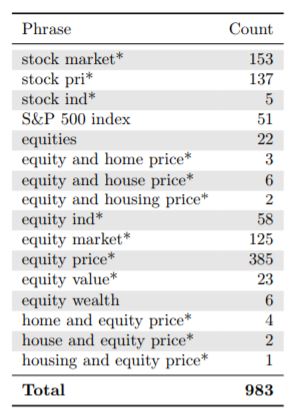 Source: The Economics of the Fed Put

“Over the 1994–2016 period, there are 983 references to stock market conditions in FOMC minutes. This number represents 14% of times that minutes mention inflation, and 31% of times they mention (un)employment.”

The authors also looked at other factors to determine what seemed to be the largest influence on the Fed. The stock market is among the most important influences. 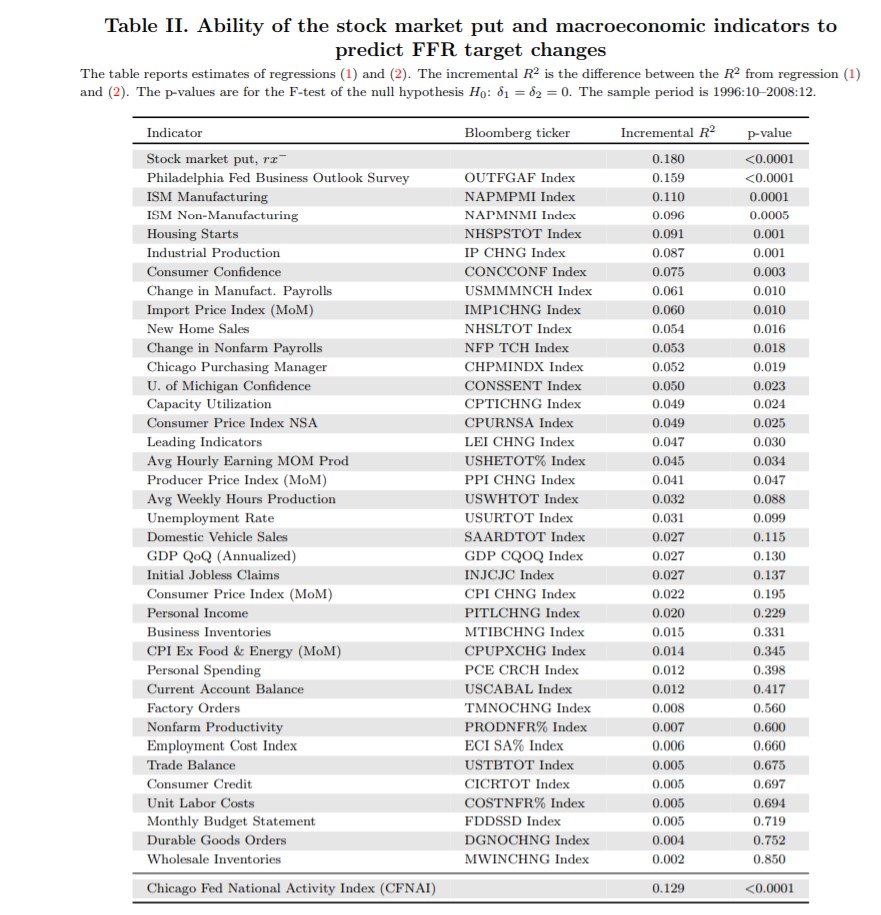 Source: The Economics of the Fed Put

Is There a Powell Put?

“The Federal Reserve’s decision last week to signal a pause in the rate-hike cycle, adopting a wait-and-see approach just six weeks after delivering its fourth rate increase of 2018, took investors by surprise.

For one analyst, the move has echoes of the late 1990s, when a nimble Fed led by Alan Greenspan arguably set the table for a final stock-market “meltup” ahead of the bursting of the tech bubble in 2000.

Dario Perkins, managing director for global macro at TS Lombard, finds himself in the middle. The Fed could cut rates by the second half of 2019 as exports weaken and the economy begins to feel the delayed, full effects of the previous tightening in financial conditions, he said, in a [recent] note.”

But he doesn’t expect the U.S. economy to fall into a recession, which means that the Fed could resume hiking rates as the global economy strengthens into 2020.

He believes the Fed followed this pattern before:

The first time was in 1995, a year after the Fed caused a lot of carnage in the bond market — that reverberated unpleasantly in emerging markets and elsewhere — with an aggressive round of rate increases that ultimately took interest rates above the level at which they neither boost nor slow the economy.

That year, the impact of all that Fed tightening was being felt at home. That led policy makers to reverse course and cut rates three times, in 25 basis-point increments, between July 1995 and January 1996 — a move that simply got rates back to neutral. In March 1997, the Fed shifted back into tightening mode with a quarter-point rate rise.

He’s certain that another round of market turbulence would lead the Fed to cut rates even before any tangible impact on the U.S. economy materializes.

Given the market’s bullish reaction to the Fed’s about-face last week, it is apparent that investors “realize the importance of the ‘Powell put,’” Perkins said, referring to the notion that the Fed will respond by loosening policy and providing liquidity in the wake of market turmoil.

“It even raises the possibility of a late-90s-style ‘meltup,” he said. “The only question is whether we need another December-style meltdown and Fed rate cuts before markets get bubbly, or whether the policy shift announced so far is already sufficient.”

Investors need to keep an eye on the Fed since that could provide a source of gains in the coming months.