An important question for investors to consider is why they would want to possibly own cryptocurrencies. The question is basically, “what is crypto?” which means is it a hedge against disaster, a speculation, a means of exchange or something else.

Economists at the New York Federal Reserve recently addressed this question, specifically seeking to determine what motivates people to participate in this market.

To find out, the economists included a special set of questions in the May 2018 Survey of Consumer Expectations, a project of the New York Fed’s Center for Microeconomic Data. The survey covers a sample of 1,146 people from ages eighteen to ninety-six, with broad representation by race and gender.

Actual and potential ownership of cryptocurrencies is concentrated in younger, wealthier demographics. Anecdotal evidence suggests that enthusiasm for cryptocurrency is highest among younger generations.

Consistent with that pattern, the economists found that individuals between 18 and 35 were 13 percent more likely than those over 35 to own or express an interest inbuying a cryptocurrency. Not surprisingly, the young group were more likely, on average, to report greater knowledge about cryptocurrencies, as shown in the chart below. 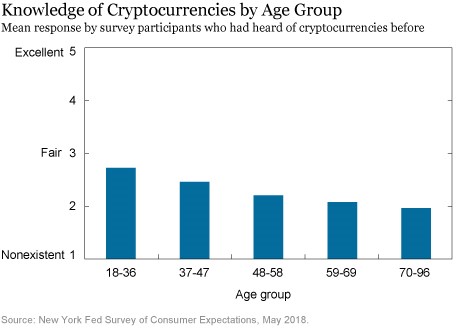 Older individuals were much more likely to cite “not knowing how to buy” cryptocurrencies as a reason for not owning any. This suggests that a lack of knowledge or familiarity with the cryptocurrency market could be an important barrier to entry for older demographics.

Individuals with an annual income of at least $100,000 are 5 percent more likely to own or express an interest in buying cryptocurrency relative to those with income of less than $100,000.

That means that younger individuals were significantly more likely to report “lack of funds” as a reason to not buy. This suggests that financial constraints may have hindered otherwise enthusiastic members of the younger demographic from participating in cryptocurrency markets.

To understand people’s views on cryptocurrency, the economists also asked survey respondents what they perceived cryptocurrency to be most similar to, given the following options (multiple answers were allowed, with the exception of “none of the above”):

But, those results might be hiding important information about the market.

Individuals who owned cryptocurrency or were interested in buying it were particularly likely to perceive cryptocurrency as being similar to gold (41 percent) and stocks or bonds (39 percent). This suggests that such individuals may think of cryptocurrencies as an investment vehicle.

In addition, 37 percent of respondents within this group likened cryptocurrency to traditional money.

If we think of traditional money as a means of payment, then this distribution of views is consistent with the idea that cryptocurrencies are currently perceived less as a payments mechanism than as an investment, even if they can play both roles.

The gap between the latter group and those who responded “none of the above” was 11 percent, as shown in the chart below. 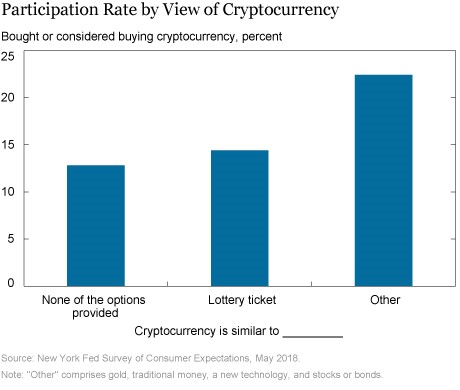 Motives for Owning a Cryptocurrency

Many buyers also pointed to the anonymity properties of cryptocurrency and their lack of trust in the existing financial system—factors that were mentioned almost the same number of times.

Among respondents who chose not to participate in the cryptocurrency market, the most-cited reason was that cryptocurrencies are a “bad investment”—the opposite of the prevailing view among buyers.

This dichotomy could reflect the speculative nature of cryptocurrency markets and suggests that there are large disagreements between respondent groups about the investment value of cryptocurrencies.

Respondents cited a lack of need as the third most significant reason for not buying cryptocurrency, consistent with the fact that cryptocurrencies are little used as a means of payment.

The issue of trust, or mistrust, appears to be perceived quite differently by the young and old groups. Individuals over thirty-five were much more likely to express distrust of cryptocurrencies relative to the existing financial system. 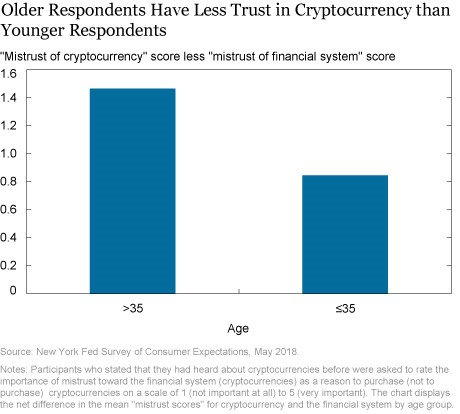 The young group’s more sanguine view of cryptocurrencies could be related to the fact that financial crises appear to have long-lasting “experience effects” that take a greater toll on younger individuals than older ones, both psychologically and financially.

In the wake of the Great Recession, younger cohorts may have less faith in the financial system and more openness to unconventional alternatives.

The survey reveals that a very high fraction of respondents are aware of cryptocurrencies and that they hold a wide variety of views on the topic. This is perhaps related to the fact that cryptocurrencies are still a relatively new phenomenon.

As with many new things, younger respondents seem to have a more positive view of cryptocurrencies than their older counterparts. As the technology matures and new applications for cryptocurrencies emerge, it will be interesting to find out how these views change.

For investors, it all indicates that the future of cryptos could be bullish since demographics seem to favor the technology.