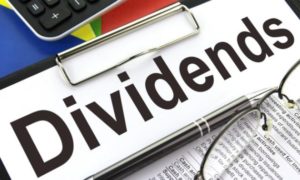 Imagine that you are responsible for making the special dessert at your family’s holiday celebration. Someone has prepared the exact same dessert for more than 50 years, in this case, and last year, an elderly relative gave you the sole copy of the secret recipe.

Now, imagine that you forgot all about that and now, with the holiday just days away, you can’t find the recipe. The tradition is about to be broken unless you can find the recipe. Many people would search everywhere, dedicating as much time as they had to finding that family heirloom.

If the tradition were broken, it would be the talk of the family. You would be viewed negatively by some, your reputation forever tied to that one thing you didn’t do.

Corporate executives can face a similar problem. Failing to maintain some traditions could besmirch their personal reputation. Given the fact that many executives also own at least some shares of stock in their company, the damages could extend beyond their reputation to their finances.

There’s an index that highlights companies where reputation risks decrease the possibility of dividend cuts. It’s the S&P 500® Dividend Aristocrats index that measure the performance of S&P 500 companies that have increased dividends every year for the last 25 consecutive years.

This index includes all of the stocks in the S&P 500 that meet the criteria. It will always include at least 40 stocks. If there are not at least 40 stocks, the index will then include the 40 stocks with the longest streaks of dividend payments, even if the streak is less than 25 years.

This index has a long history of outperforming the broad stock market, according to data from Standard & Poor’s. 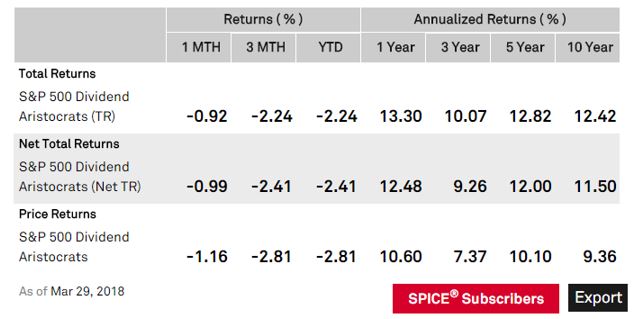 You can see in the table above that the Dividend Aristocrats has outperformed the S&P 500 over the long term. It’s not a surprise that the dividends constitute a significant portion of the index’s total returns.

The dividends are most likely safe. The CEOs and members of the Boards of Directors of these companies are in the same position as the family member entrusted with the secret recipe. No CEO will want to be the one remembered for cutting the dividend and breaking a tradition.

Cuts are possible. After all, when it comes to financial markets there are rarely, if ever, guarantees. But the CEOs of Dividend Aristocrats can be counted on to cut dividends only as a last resort and truly after all other possible options have been reviewed and most likely tried.

There are a number of well known companies on the list of dividend aristocrats. Coca-Cola (NYSE: KO) has increased its dividend payments for 57 consecutive years and Johnson & Johnson (NYSE: JNJ) has a record of 55 consecutive increases.

Some companies that seem newer also have long histories of increasing dividends. The hardware retailer Lowe’s (NYSE: LOW) has increased its dividend payments for 55 consecutive years.

Any of the companies on the list of aristocrats is a good investment for those seeking safe income. But, even though those stocks pay almost guaranteed income, the stock is still vulnerable to a decline. To limit the risks of a sell off, a diversified basket of dividend paying aristocrats should be considered.

The dividend yield on NOBL is 1.9%. It is likely that the amount of income received from the ETF will increase in time, making this an attractive opportunity for value investors with a focus on the long term.

The CBO explains that “the Index is a benchmark index designed to track the performance of a hypothetical buy-write strategy on constituents of the S&P 500 Dividend Aristocrat Index.” Details on the index include:

The SPAI Index investment strategy includes (1) buying the stocks contained in the S&P 500 Dividend Aristocrat Index, and (2) partially “writing” (or selling) weekly “covered call” options on each stock, generally on the last trading day of each week.”

While KNG is an interesting idea, the fund is new and relatively thinly traded. Total assets in the fund are about $6 million which could make it difficult for the fund sponsor to maintain the fund. That means there is a risk the ETF could be closed.

If you choose to invest in KNG, you should monitor the news. If the sponsor does close the fund, you should have an opportunity to sell it before the official last day of trading.

If you prefer to trade in individual stocks, there are also small companies that have long histories of paying dividends. The longest streak for publicly traded companies belongs to The York Water Company (Nasdaq: YORW) which began in 1816.

The stock has been in a longstanding up trend, as expected for a value stock with safety. Breaking a tradition that dates back more than 200 years seems to be an unlikely event and if guaranteed income is a primary objective, YORW could be a stock to consider.

Long standing dividends are safe and should be considered by value investors.

To read more about value investing and other income opportunities, click here.