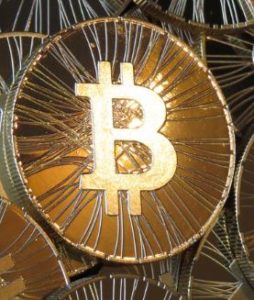 Many traders might like to trade bitcoin but are unsure how to get started. They know that the process can be rather involved and requires setting up new accounts. They also know the new accounts will not have any type of regulatory insurance and will not be as safe as brokerage accounts.

Several companies have tried to overcome these obstacles by creating exchange traded funds (ETFs) that provide exposure to bitcoin but the Securities and Exchange Commission (SEC) has not approved any of the proposals.

There is at least one opportunity for at least some investors to access bitcoin through their brokerage account. The Bitcoin Investment Trust (OTC: GBTC) trades over the counter and is a way to gain exposure to the cryptocurrency.

GBTC is sometimes referred to as an ETF but it is a grantor trust. Under that structure, it is not registered with the SEC under the Investment Company Act of 1940 and it doesn’t trade on an exchange. It trades on the over-the-counter market, which has less stringent participation rules than exchanges.

The trust was initially launched as a 506 (c) private placement in September 2013 and is managed by Grayscale Investments, a unit of Barry Silbert’s Digital Currency Group.

DCG is a holding company focused on cryptocurrencies and blockchain technology that also owns CoinDesk, a leading blockchain news site and has investments in more than 110 companies including the Kraken Bitcoin Exchange.

Since 2013, accredited investors have had the ability to purchase restricted shares of Bitcoin Investment Trust directly from Grayscale at the daily net asset value, which is tied to the trailing 24-hour volume-weighted average price of the TradeBlock XBX Index. The NAV is approximately 0.0010023 bitcoin per share.

GBTC recently held more than 187,000 bitcoins. The number of coins held by the trust fluctuates substantially as investors move money in and out of GBTC. Recently, the trust held $1.7 million.

“The trust is solely invested in Bitcoin and does not hold any other asset, nor does it trade its holdings, have leverage, lending or the like,” said Michael Sonnenshein, managing director at Grayscale Investments.

“In 2015, through the approval of a Form 211, working with the Financial Industry Regulatory Authority (FINRA) and the OTC Markets Group, we were approved to quote the trust on the OTCQX market, the top tier of the OTC Marketplace.”

Shares are sold directly to accredited investors. After holding shares for one year, investors who purchased shares directly from the trust become eligible to sell their “seasoned” shares into the public market, said Sonnenshein. The rules for selling unregistered shares are listed under SEC Rule 144.

After shares are sold into the secondary market, any retail investor can buy them.

“This is highly unusual. Most private placements don’t convert into shares that trade OTC,” said Kathleen Moriarty, a partner at Chapman & Cutler LLP and, as specialist on 40 Act funds, she was actively involved in the creation of the first ETF, the SPDR.

“It’s not unique, but it’s not common. Not that none do: The rule permits it, but they are made for high net worth individuals.”

GBTC is eligible for tax-advantaged accounts such as IRAs, Roth IRAs and 401(k)s.

Trading Can Be Expensive

GBTC has a 2% management fee but that is just the start of the fund’s expenses. It trades like a stock and the chart shows some degree of liquidity.

However, the market price is significantly greater than the value of the underlying assets.

The difference is similar to the premium seen in closed end funds which often trade at a price greater than the fund’s underlying net asset value.

The reason for GBTC’s premium is the high demand for the small supply of shares. It has only 176 million shares outstanding. The trust has an open-end structure as it can raise assets through the private placement, but those shares need to wait a year to trade.

“If GBTC was more liquid and larger, and Bitcoin had wider acceptance, then there would be closer correlation between the price of GBTC and the price of the underlying asset,” said David Foster, a securities fraud litigator in Farmington Hills, Mich. “This is a speculative investment for a speculative commodity.”

“There are other approaches (to investing in Bitcoin), just not another exchange-traded approach, which is why GBTC has been successful,” said Matt Hougan, chief executive of Inside ETFs, an ETF education company.

“It obviously fills a need in the market, that’s why investors are buying it. I just don’t like products that trade at substantial and varying premiums. There’s enough risk in crypto prices before you layer on a premium issue.”

“Since the shares began quotation on the OTCQX market in early 2015, they have traded at a premium valuation to the NAV,” said Sonnenshein. “While we cannot pinpoint a singular reason for the premium, we can surmise several factors. Firstly, there are fewer shares available on the market than there is demand.  Secondly, it is the only U.S.-based investment vehicle that provides direct exposure to Bitcoin through the purchase of a security.”

There has consistently been a premium built into the market price of GBTC. 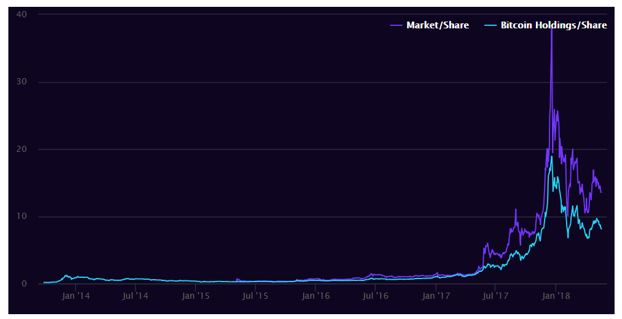 Grayscale recently declared a 91-for-1 stock split for the trust for shareholders of record in January. This lowered GBTC’s share price and increased the supply adding more shares to meet demand, thus increasing liquidity. The premium of share price over NAV has fallen but is still more than 60%.

It is possible those products will begin trading over the counter.

In the meantime, if this seems like the right investment for you, consider watching the premium and buying when the premium is smaller than it is now. In time, the premium could disappear as other products come to market so overpaying could be a long term losing strategy.