Trading Alongside the Fed

When searching for the best return on investment as the Federal Reserve raises interest rates, fixed income investors will get both good news and bad news. Because interest rates are so low, let’s start with the bad news first.

Investments with high rates of return in the current market environment are also most likely to be the investments that carry the greatest risks as interest rates rise. This is because of the fact that the price of fixed income investments moves in the opposite direction of interest rates.

The Relationship Between Prices and Interest Rates

We often hear that when rates rise, prices fall. But, we rarely see an explanation of why that is so. Consider a bond that is issued by a high quality company that will pay investors an interest rate of 4% for the next ten years. Each bond costs $1,000.

Rather than continue falling behind as inflation rises, the investor decides to sell. But, what is the bond worth now that inflation has increased? The simple answer is less. 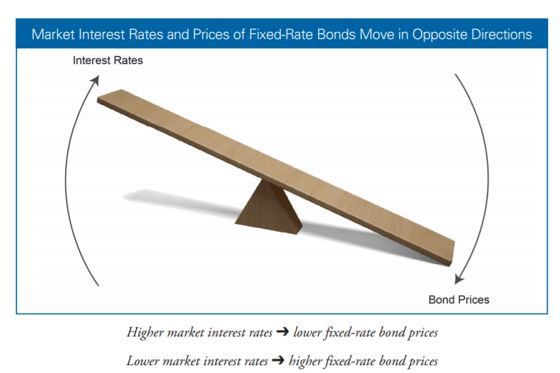 The longer answer is that the bond will be priced to be competitive with new bonds that were issued. There are now eight years left to maturity for this bond. Companies issuing bonds now will be paying interest rates that reflect the higher rate of inflation.

So, another high quality company might issue a bond with eight years to maturity with an interest rate of 8.5%. In order to entice another investor to buy the bond that pays 4% interest, the seller will need to lower the price so it is more appealing.

If the price falls to $470, the $40 in annual interest payments will provide a yield of 8.5%. That 4% bond that was bought just 2 years earlier lost more than half of its value because interest rates rose.

Inflation Is Just One Factor in the Price Decline

Earlier, we noted that investments with high rates of return in the current market environment are also most likely to be the investments that carry the greatest risks as interest rates rise. This is true because of the risk of default.

This is because as interest rates rise, the cost of servicing debt can become more expensive. The subprime lender may need to borrow at higher and higher rates and then try to pass those costs on to their customers. Eventually rates will get too high and customers will stop borrowing.

As that happens, the company will start to pare back its staff. This will result in layoffs at that company. But, that is just one company. The same process will be playing out at thousands of other companies and the result will be an increase in unemployment.

Increased unemployment is likely to leave some customers of the subprime lending firm unable to make their payments. They default, and as the number of defaulting customers rises the company finds it difficult to pay its lenders. This leads to the potential default of the company’s bonds.

Investors in bonds understand this risk and they price that risk into the prices of bonds. As defaults rise, the risk premium rises. That bond that saw its price fall from $1,000 to $470 could fall even further as default risks increase. It might be worth just $350 in the market, leaving investors with large losses.

Holdings of these funds will include fixed income securities like Treasury bills maturing within days or weeks, overnight loans to banks or other products that carry relatively little interest rate risk since they are exposed to the market for a short period of time. They also manage default risk by limiting most investments to high quality instruments.

The chart of one of those ETFs is shown below. This is a weekly chart of PIMCO Enhanced Short Maturity Active ETF (NYSE: MINT).

As you can see, the ETF has been steadily rising in value since the Fed began raising rates two years ago. The actual gains have been small, however. The total return of MINT over the past two years has been just about 3.8%.

For investors willing to accept more volatility in pursuit of the best return on investment, the VanEck Vectors Investment Grade Floating Rate ETF (NYSE FLTR) could be an alternative.

FLTR has gained about 6.3% since the Fed began raising short term rates.

For the past two years, floating rate ETFs have been moving up in price slowly, in line with the slow pace of interest rate policy changes of the Federal Reserve. However, the Fed is expected to accelerate the pace of its increases in 2018.

Analysts currently expect three rate hikes in the next year. The Fed also told the market to expect three hikes in its most recent forecast. There have only been five increases over the past two years. The faster pace could boost returns on short term rates.

Another benefit of these short term funds is that they offer a relatively high degree of safety. Losses, if any, should be expected to be small if the Fed unexpectedly reverse course. This means these could be the ideal place for investors to place cash as they search for investments with high returns.

For more investment opportunities tips, you can follow our weekly blog here.