Trade the Dogs of the Dow Strategy for 2019

You might be familiar with the Dogs of the Dow, a popular investment strategy that identifies stocks in the Dow Jones Industrial Average offering the best value. The strategy was first detailed in a 1991 book, Beating the Dow by Michael B. O’Higgins.

The strategy buys the ten highest yielding stocks from the thirty stocks that are included in the DJIA and trades just once a year. These ten stocks are known as the Dogs of the Dow.

Theoretically, high dividend yields are a sign of value in stocks as long as the dividend is safe. Large caps stocks included in the Dow are most likely safe and the committee that selects stocks for the index would almost certainly remove stocks before they fell into severe financial distress.

Dividend yields are usually viewed as providing information about income and most investors view them as an income screening tool. But in this strategy, dividend yields are identifying value just like the price-to-earnings (P/E) ratio or other popular ratios would.

When yields are used for valuation, the idea of relative valuation is being applied. We are not concerned with whether the yield is 1% or 10%. We are looking for the highest yields in a group of stocks that all pay a dividend.

Since each of the Dow stocks is an income stock, the dividend yield is a way to sort them and identify the most undervalued or overvalued stocks. This approach only works when applied to groups of stocks that all pay a dividend that is reasonably safe so yields have limited use in valuation screens.

The Data Supports the Theory

Results presented in the book showed simply buying ten stocks and trading once a year did in fact significantly outperform the market. Following the strategy from 1973 to June 1991 when the book was published would have resulted in a total return of 1,753%, more than three times better than the gains of the Dow which returned 559% over that same time.

That’s an annualized rate of return of 16.61% for the Dogs and 10.43% for the index. In the years since publication, the strategy has remained popular even though it has not really delivered the same types of gains.

In some years, the strategy outperforms and in other years the average does better than the Dogs. Since 2000, the Dogs have slightly outperformed the Dow, gaining an average of 8.6% a year while the Dow is up an average of 6.9% a year. Over other time periods, the track record is mixed.

Given the fact that the performance is so similar to the index in many years, some investors have looked for variations on the idea. Their thinking seems to be that the Dogs did so well in the original test there must be a way to succeed in the future.

One popular variation of the strategy is to buy only the five lowest priced stocks from the list of the ten high yielding stocks. This variation is sometimes called the Small Dogs of the Dow and after delivering great returns in the initial test period, it has also delivered mixed returns since publication, beating the Dow in some years and lagging in others.

Following the basic strategy involves investing an equal amount of money in each of these 10 stocks, or 5 stocks in the case of the Small Dogs, once a year and holding them for one year.

You can buy the Dogs or the Small Dogs anytime during the year and hold for one year before rebalancing or you can even rebalance two or four times a year.

In the long run, the results are about the same no matter when in the year when you start or how many times you rebalance the portfolio.

It is also possible to use options with the strategy to lower the costs. Long term call options could be used to implement the strategy.

Barron’s recently updated the strategy performance. “Last year, the Dogs of the Dow beat the market. If you bought the 10 highest-yielding stocks in the Dow at the beginning of 2018, then your total return for the year was just over zero. Not great, but better than the Dow overall, which returned minus 3.5%.

Zero is also better than the S&P 500 which returned minus 4.4%, including dividends.

What’s more, if you kicked out General Electric (GE) when it was removed from the Dow in June, then your return improved, to 3.5%. GE was unfortunately the worst-performing stock (that started out) in the Dow last year, losing about 55% of its value.

For 2019, Barron’s noted, “This year nine of the 10 remain. GE is out and JPMorgan Chase (JPM) is in. That is the only change to the portfolio.” 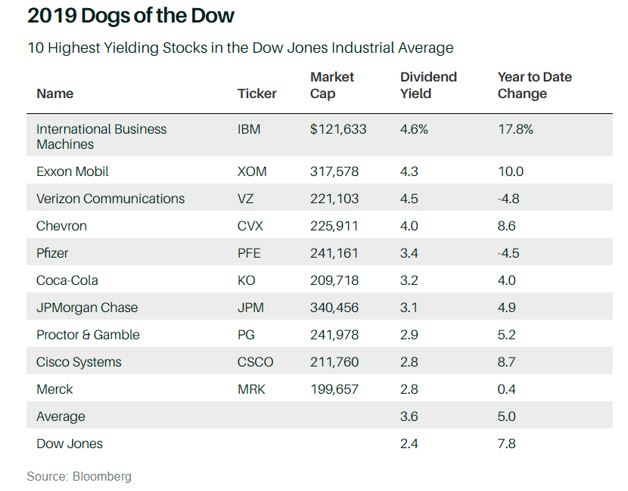 However, buying call options on the stocks, whether the investor is buying 5 or 10 call options, is likely to use 10% or less of the capital needed to buy the stocks. This means limited trading capital is not committed to a single strategy in a smaller account.

The capital not used for the strategy could then be applied to other strategies and potentially enhance returns of the overall account.