This Study Could Reveal the Best Way to Invest in Crypto

Maybe some investors would like to invest in the crypto markets but find the market itself to be daunting. All told, it’s a market that’s worth more than $140 billion and that 2,134 different coins for investors to choose from according to CoinMarketCap.com.

Bitcoin is perhaps the best known and accounts for about half of the recent market size. The next two largest coins are Ethereum and XRP and both are approximately 10% the market cap. These three could be the most important coins to follow for some investors.

CEPR was founded in 1983 and is a network of over 700 researchers based mainly in universities throughout Europe, who collaborate through the Centre in research and its dissemination. The Centre’s goal is to promote research excellence and policy relevance in European economics.

CEPR Research Fellows and Affiliates are based in over 237 different institutions in 28 countries (90% in the EU). The organization has made key contributions to a wide range of European and global policy issues for over two decades.

The study looked at initial coin offerings, or ICOs, and concluded, “We should not expect a high correlation between ICO tokens and the price of Bitcoin or Ethereum given that they have very different business cases.

This column demonstrates that this was indeed the case during 2007, but the moment the Bitcoin/Ethereum bubble burst, the correlation with ICOs increased and it remained high even when prices had stabilized.

This may have been because the ICO market is still in its infancy and needs to mature, or it may indicate that ICOs were just one of the children of the hype and are likely to share the fate of major cryptocurrencies.”

Getting to the Current Market Environment

Digging into the paper, the authors noted, “While the Bitcoin hype came under pressure in 2018 as its price collapsed, activity in initial coin offerings (ICOs) still remained significant. Over 1,000 new coins or tokens were created through ICOs in 2018, raising over US$21 billion.

The two largest ICOs (pre-sale) – Telegram and EOS – raised $1.7 billion and $4.2 billion, respectively, and the next largest also raised over $500 million. Investors, aspiring entrepreneurs, and also policymakers and regulators have been paying increasing attention to this new market.

While ICOs typically rely on a similar technology to that used in cryptocurrencies (i.e. blockchain), their purpose is much wider than just facilitating payments. ICOs can be seen as a new funding model for new ventures.

ICOs differ from traditional forms of funding because the founders often do not retain control of the platform after its launch, an attractive feature for those who like the idea of decentralized power.

While many ICOs are in the IT space, there have also been many cases in other industries, ranging from health care, energy, and finance to infrastructure (see Figure 1). 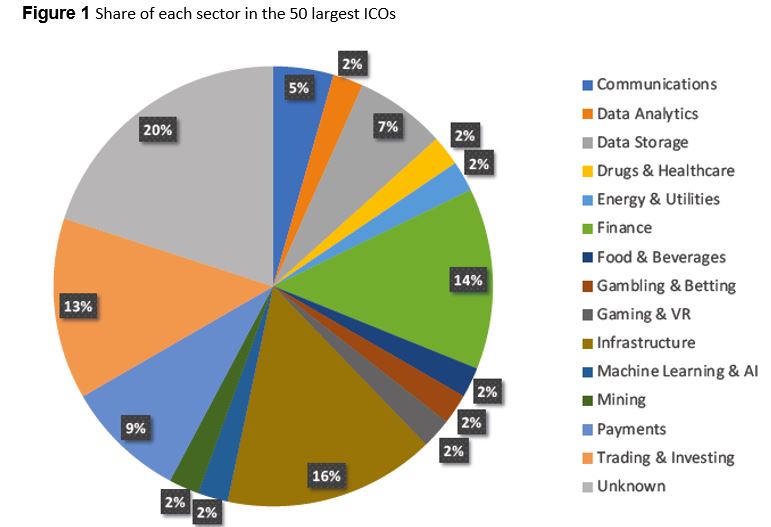 Source: CEPR, calculations based on list of largest ICOs at coinist

ICOs involve two types of tokens: security tokens and utility tokens. Security tokens offer participation in governance and future earnings, and are thus more akin to equity. Regulators have increasingly taken the view that the issuance of such tokens should be subject to the same regulations as securities, implying high regulatory costs.

To avoid potential regulation, most recent ICOs have involved utility tokens, where no ownership or dividends are granted to token holders. Utility tokens instead promise their holders access to the venture’s future services.

This model works because most of the projects relate to building a platform around a community of users trading certain services (for example, Filecoin is a platform to exchange decentralized electronic storage services).

As a result, the ICO not only raises the funding for the project but also puts into motion the launch of the network of future users.

While there are potential benefits to ICOs, there are also costs. The creation of separate tokens for services resembles a world in which products and services are priced in their own currency and transactions take place through barter, the equivalent to a modern “Stone Age world of the Flintstones”.

From the point of view of the investor, there can also be concerns about token values. Many early investors are betting on the popularity of the service associated with the token increasing so that the value of the token increases and delivers a return.

But there can be a contradiction here – returns can only be realized when tokens are used, but tokens are only bought by investors speculating on a return.

The final potential risk is that ICOs do not have any inherent economic advantage but are attractive simply because they offer a way of avoiding the regulatory costs related to securities laws and investor protection.

In the worst-case scenario, they allow fraudulent projects to lure in small-time investors. The large number of ICOs that have failed provide support to these concerns.

Because of the novelty of ICOs it is difficult to establish at this stage whether the potential benefits outweigh the risks and costs.

To determine how ICOs trade as an asset class, the economists, “study this correlation empirically by collecting data on the pricing of the largest 50 ICOs and test whether the behavior of ICO returns are correlated to the returns of Bitcoin and Ethereum.

If ICOs are truly pricing their unique business models, we would expect their returns to be idiosyncratic with low correlations. If, on the other hand, they are simply seen as an investment vehicle to generate excess returns based on a ‘cryptocurrency bubble’, we would expect them to be highly correlated to prices of the major cryptocurrencies.

We calculate the daily correlation between the daily return of the top 50 ICOSs with the return of Bitcoin and Ethereum using a 30-day rolling window.4

The results are shown in Figures 2 and 3, where we plot the evolution of the price of the two cryptocurrencies in the same charts to understand whether the correlation has changed over time as the sentiment towards these currencies has changed. 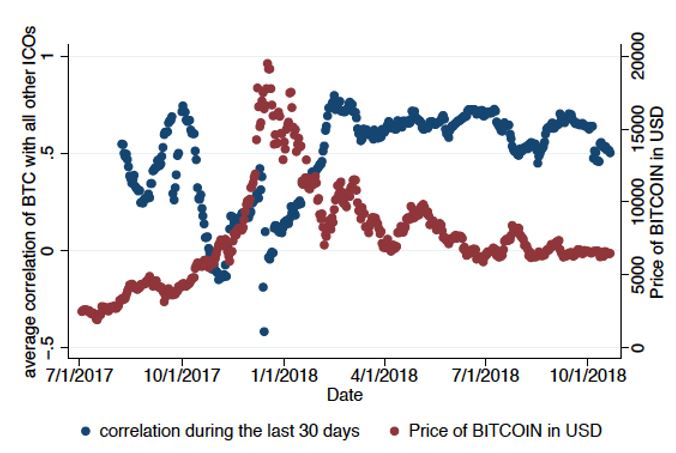 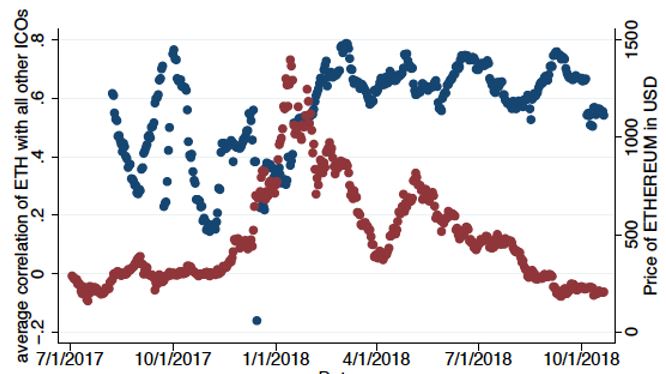 Correlations remained positive but low while the cryptocurrency phenomenon was taking off and Bitcoin and Ethereum prices were increasing.

However, once the price of the two cryptocurrencies starts falling, correlations increase and reach a very high level, signaling that daily news on the future of Bitcoin and Ethereum seems to be moving the price of all ICO tokens.

It seems that as the ‘cryptocurrency bubble’ bursts, the price-discovery mechanism of ICOs collapses and all their prices just track the value of Bitcoin or Ethereum.

For traders, this means that in bull markets, investors should trade individual cryptos. In a bear market, the largest coins could be the best place to preserve wealth.