This Peak Could Doom the Stock Market

Investors often focus on earnings, or sales, or how the company is growing its earnings or sales. Other investors might look at cash flows or other less popular measures of the financial health of a company. Among the less popular metrics is one that can be considered worrisome.

Net profit margin is a calculation that “expresses the profitability of an entire company, not just a single product or service. It is also expressed in a percentage; the higher the number, the more profitable the company.

A low profit margin might indicate a problem that is interfering with profitability potential, including unnecessarily high expenses, productivity issues, or management problems.

Calculating the net profit margin … requires the entire company’s revenue and costs. Divide the company’s net income (the profit after expenses are deducted from gross income) into total sales, then multiply the result by 100 to get the answer expressed as a percentage.

People using net profit margins to determine a company’s profitability are cautioned not to compare a business in one industry to a business in another. Industry characteristics vary so much that it’s unrealistic to expect a restaurant, for example, to be comparable to an auto parts retailer.”

Why Profit Margins Are Worrisome

“In the middle of what may be the worst quarter for company profits since 2016, there’s a common refrain: This is as bad as it will get. The last few months are the trough, and one quarter doesn’t make a year.

Anyone trading on that view have been a winner. The S&P 500 is en route to its fourth straight monthly advance and sits less than 1 percent from a record. But if you’re a bull, you should be aware of a dissident group of forecasters who see clouds looming on the S&P 500 earnings horizon.

Specifically, they’re asking how likely earnings are to bounce back should profit margins narrow.

“Why are we optimistic — because the Fed says we’re done?” wondered David Spika, president of GuideStone Capital Management, in an interview at Bloomberg’s New York headquarters. “Ultimately, we need earnings growth, we need economic growth. To me, it’s short-sighted.” 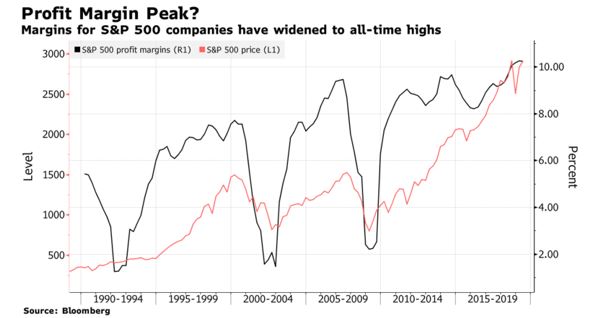 One thing bulls don’t want to hear is Wall Street preaching that costs are about to start eating into the bottom line. At more than 10 percent, net margins are around the highest they’ve been in at least three decades, providing a boon to the bull market.

And while inflation pressures are few and far between, concerns over higher layouts for labor, oil and other raw materials are swirling.

Bridgewater Associates recently warned clients that the immense widening of margins over the last 20 years, which it says accounted for half of the developed world’s stock returns, could be at a turning point.

Strategists at Goldman Sachs have warned about profitability coming under pressure, too. At Morgan Stanley, researchers are pointing to decelerating global survey data as a precursor to lower margins.

“We are not convinced that the first quarter will be the trough in profit margins,” Lisa Shalett, chief investment officer for Morgan Stanley Wealth Management, wrote to clients [recently].

“To the contrary, the leading properties of the PMI data suggest that the recent global slowdown could reverberate for at least another three months.” 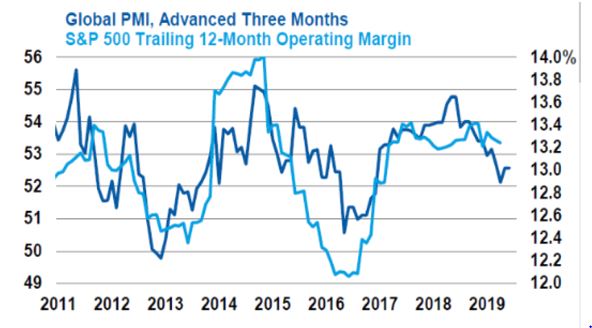 One week into earnings season, and companies are already bemoaning higher costs. J.B. Hunt Transport Services, Inc., sometimes viewed as a bellwether for the global economy, mentioned higher salaries as one reason for lower operating income.

On average, profit margins top out four quarters before the market does, a 2015 study completed by Strategas Research Partners found. And it bears noting that warnings that profit margins were about to collapse were rampant when the paper was published four years ago.

These estimates could be optimistic as Bloomberg noted,

“Estimates that distant have a habit of coming down and some analysts are already saying to forget about that big of a fourth-quarter rebound. While Wall Street firms have already taken the knife to estimates for the first three quarters, they haven’t yet made adjustments to the fourth, according to Ned Davis Research.”

“There appears to be some delaying of estimate cuts and/or expecting reacceleration in the second half of 2019,” Ed Clissold, the firm’s chief U.S. strategist, wrote in a April 16 note to clients. “Regardless of the reason, Q4 2019 numbers will likely be revised downward.”

“The expectation is for a pretty significant decline in margins — we’re a little surprised that the market isn’t starting to price that in,” he said.

“The thing that’s odd is you’ve got stocks almost back at all-time highs, almost all based on the Fed pause. We’re looking at the expectation for an earnings recession — two consecutive quarters of down earnings — we’ve clearly got margin compression, and the market doesn’t seem to care.”

What all of this means is that companies could see profit margins decline and that could translate into lower earnings per share (all other things being equal). Of course, all other things are not equal since companies have been buying back shares.

Because of buybacks, it is possible margins can contract while earnings per share increase. That would be, in effect, masking the problem which is the fact that profitability is being squeezed. This quarter, as earnings reports are released, it could be important to consider more than just the earnings, glancing at margins as well since that could signal a change in the trend for many companies.