This Obscure Indicator Can Help You Beat the Market

When investors do consider economic indicators, they often look at the so called headline numbers. This might include the unemployment rate or an inflation report. Even less well known are obscure indicators like the ECRI Weekly Leading Index.

ECRI is the Economic Cycle Research Institute, an organization with a long history. As ECRI explains,

“A century-long tradition of business cycle research gives ECRI a singular perspective on the ebb and flow of the economy, even in the face of unexpected shocks. Our approach is informed by the fundamental drivers of economic cycles.

It is an approach pioneered by ECRI’s co-founder, Geoffrey H. Moore, and his mentors, Wesley C. Mitchell and Arthur F. Burns.

In 1950, Moore built on his mentors’ findings to develop the first leading indicators of both revival and recession. In the 1960s he developed the original index of leading economic indicators (LEI). It is a testament to the quality of that breakthrough that, nearly half a century later, many still believe the LEI and its variants to be the best tools for cycle forecasting.

However, building on that foundation, by the late 1990s ECRI had put together a far more sophisticated framework for analyzing international economic cycles that remains at the cutting edge of business cycle research and forecasting.”

The ECRI Leading Index is shown in the chart below.

This index has a moderate lead over cyclical turns in U.S. economic activity. Historical data begins in 1967. The indicator is designed to predict the timing of future changes in the economy’s direction.

The Leading index is intended to “signal those turns before the fact, and well before the consensus. ECRI’s focus is on identifying when those changes in direction will occur.” An explanation of a leading index is shown next. 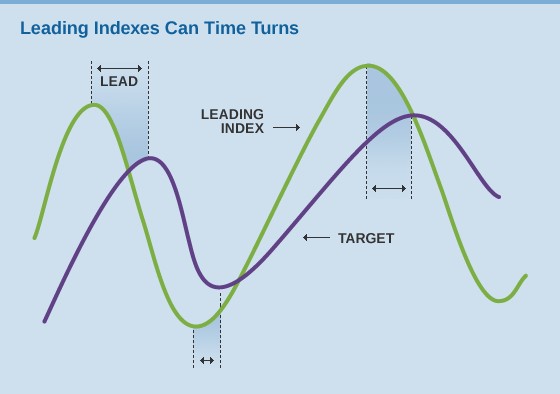 To help assess where we are in the cycle, it is common to consider the year over year change in economic data. That change is shown in the next chart. 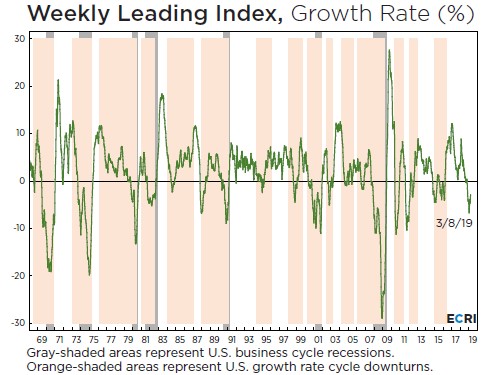 The year over year change is now below zero, an ominous signal for the economy.

ECRI has warned that the economy could be approaching a recession.

The problem is … the cyclical drivers of economic growth continue to wind down, meaning that the slowdown is set to continue. That’s the objective message from the same array of leading indexes that we used to predict the current U.S. economic slowdown in the context of a global slowdown last year.

A case in point is the publicly available U.S. Weekly Leading Index, whose growth rate remains in a cyclical downswing.

If the U.S. slowdown continues until the opening of a recessionary window of vulnerability, within which almost any negative shock would trigger recession, it will be too late for the Fed to head off a hard landing, as it was before the 2001 and 2007-09 recessions.

Today, despite the risk-on rally, a couple of conflicting concerns linger – fears of recession down the road and residual worries about resurgent inflation. To be sure, a recession isn’t imminent, but it’s not off the table. At the same time, a renewed upswing in inflation is nowhere in sight.”

ECRI is an independent research group and their work is highly respected. They have back tested their indexes and have an impressive track record. One example shows how their research worked in the past, correctly identify the turning points in the early 1990s. 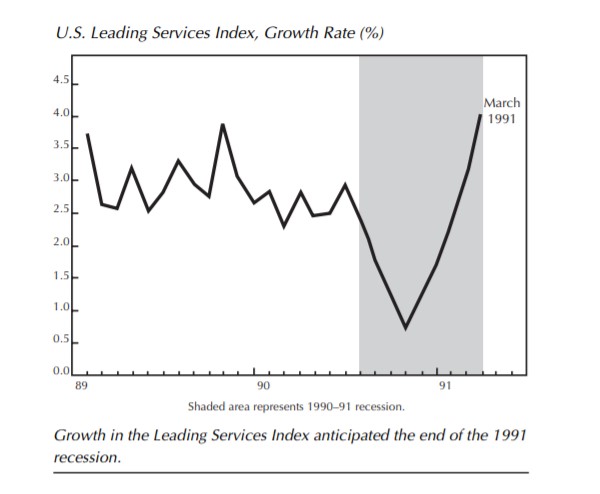 More recent forecasts include a warning in October 2018 that ““The global industrial slowdown we first forecast a year ago is in full swing and set to worsen. Meanwhile, with purchasing managers indexes actually lagging last November’s peak in global industrial production growth, the consensus was caught behind the curve.”

Investors who heeded that caution could have decreased their exposure to the stock market and avoided some of the decline that marked the fourth quarter last year.

“Today, our research shows that the U.S. economy is approaching a recessionary window of vulnerability. But it isn’t yet in that window, so the economy remains relatively resilient to shocks. Therefore, while our lonely forecast last year of a cyclical slowdown in growth has now proven correct, it’s premature to conclude that a recession is imminent.

Our track record isn’t perfect, but we have been consistent in making some of the most impactful predictions in recent history. We made a timely U.S. recession call well ahead of the Lehman Brothers collapse. We were then virtually alone early the next spring in correctly predicting the end of the Great Recession in real time.”

Investors can follow ECRI’s indexes or turn their attention to important economic indicators. Economist tend to watch four indicators for signs of recessions:

The recent readings of these indicators is shown in the next chart: 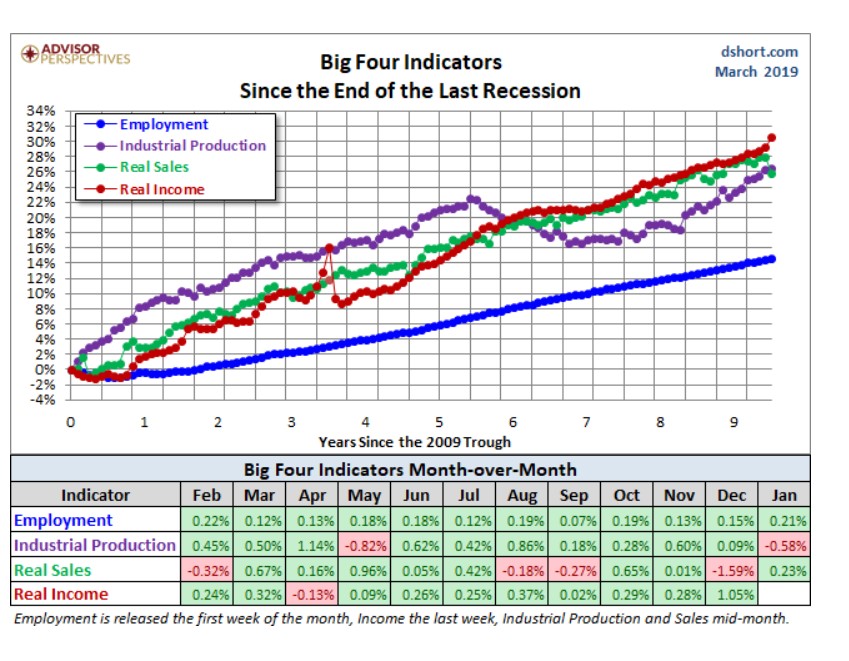 Analysts noted, “The US economy has been slow in recovering from the Great Recession, and the overall picture has been a mixed bag. Employment and Income have been relatively strong. Real Retail Sales have been rising but below trend. Industrial Production has been slow to recover and has finally been showing signs of improvement.”

This data has been delayed by the government shutdown. Some economists question the data as it is released believing that there could be problems with data gathering associated with the shutdown and are waiting for revisions.

But, for now, the big four are supportive of an economic expansion even if the picture is weakening. As ECRO notes, a recession isn’t imminent, but it’s not off the table. That means investors should be attentive to economic indicators, even if it is not popular to do so.

Watching for signs of additional weakness could help investors avoid a sharp downturn in the stock market that often accompanies recessions.