Officially, there hasn’t been a bear market since 2009. The S&P 500 bottomed in March of that year after falling more than 55% over the previous year. That was the last bear market, and it was the second time in the twenty first century that the index fell by more than 50%.

A bear market is officially defined as a decline of 20% or more. A correction is a decline of at least 10% but less than 20%. While we haven’t had a bear market, there have been some close calls. The chart below shows the steepest decline in the current bull market, a 19.2% drop in the Dow Jones Industrial Average.

The S&P 500 did fall more than 20% over that time but the Dow is generally the official index for defining a bear market. As earnings season moves on, this current time period is showing some similarities with that time frame in 2011.

As The Wall Street Journal reported, “Investors are selling the shares of firms that hit quarterly earnings expectations at the highest rate since 2011, a sign of concern over how long the good times can last for American corporations.

“What’s disconcerting is that companies are reporting good earnings with good guidance and they get a little pop, but then they sell off,” said Lew Piantedosi, who leads Eaton Vance’s growth-stocks team. “It’s starting to feel like the market is pricing in a greater likelihood of a recession in 2019.”

Take Amazon, the online retailer and web-services company that on Thursday posted a firm record with a third-quarter profit of $2.88 billion. It made 11 times more in the period than it did a year earlier, but its sales fell just short of expectations. Amazon shares tumbled 7.8% Friday, far steeper than the S&P 500’s 1.7% decline. Amazon is down 18% this month.

While these are just a few high profile examples, on average, companies beating earnings estimates are selling off, contrary to normal market behavior.

The percentage of companies reporting EPS above the mean EPS estimate is equal to the 1-year (77%) average but above the 5-year (71%) average.

This percentage decrease is well below the 5-year average price increase of +1.0% during this same window for companies reporting upside earnings surprises.

Companies that have reported negative earnings surprises for Q3 2018 have seen an average price decrease of -3.8% two days before the earnings release through two days after the earnings.

This percentage decrease is larger than the 5-year average price decrease of -2.5% during this same window for companies reporting downside earnings surprises.”

The performance of companies beating analysts’ estimates is shown in the chart below. 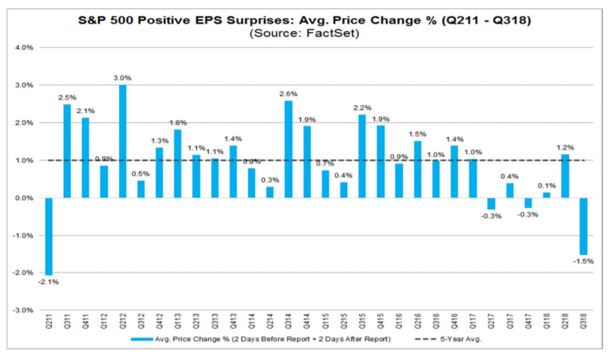 Pessimism Could Be Taking Hold

Analysts noted the market reaction to earnings could be a signal that the stock market is in trouble and investors could be increasingly pessimistic.

“Perhaps more concerning, sales growth hasn’t held up as well. About 41% of companies have posted sales that have missed analysts’ estimates, far greater than the 23% of companies that have reported weaker-than-expected earnings and on track for the highest share of misses this year, according to FactSet.”

JPMorgan Chase & Co., which models recession probabilities based on factors ranging from wages to consumer sentiment, said in October that the U.S. has a 28% chance of falling into recession in the next year. Looking at the next two years, that probability rises to around 60%.

In part, the bets reflect trepidation about the longevity of the economic expansion, which earlier this year became the second-longest in U.S. history.

Data [also] showed sales of new homes in the U.S. fell for the fourth month in a row in September. Major auto makers also reported steep declines in U.S. sales for September.

That is adding to the sense among investors that factors that had once given stocks a boost—such as upbeat earnings reports or economic data—are becoming less important.

At the end of January, the Dow dropped more than 12% in less than three weeks. This could, of course, just be a similar pull back. But, it also could be the beginning of the first bear market in nearly a decade.

The market’s reaction to earnings indicates that this is most likely the beginning of an extended decline, or at least a period of time when the stock market stops rising. It’s possible a market consolidation could take hold.

A consolidation occurred after the decline that unfolded earlier this week. But, that consolidation came as companies were reporting good news and telling analysts that tax reform would have a positive impact on earnings.

That’s not the case now. Analysts are now expecting earnings growth to slow after the boost that tax reform did provide.

Slower growth should lead to lower market valuations and that is a sign of trouble for the stock market.