This Long-Term Trend Could Drive This Stock Up

Investors often say they focus on the long term. If they really do, it could be useful to consider some long-term trends that could deliver gains. In this article, we provide an example of that type of process.

Start With the Trend

One trend that could be important to investors is the growth of the world’s middle class.

According to the recently released Brookings Global Economy and Development Report, the world’s middle class will keep growing, by roughly 160 million each year through 2030.

The report notes, “Figure 5 also shows a sharp acceleration of the speed at which the middle class is expanding. It was only around 1985 that the middle class reached 1 billion people, about 150 years after the start of the Industrial Revolution in Europe.

It then took 21 years, until 2006, for the middle class to add a second billion; much of this reflects the extraordinary growth of China. The third billion was added to the global middle class in nine years.

Today we are on pace to add another billion in seven years and a fifth billion in six more years, by 2028. Of course, thereafter, all the large countries will already have substantial middle classes and the rate of increase will slow significantly. “ 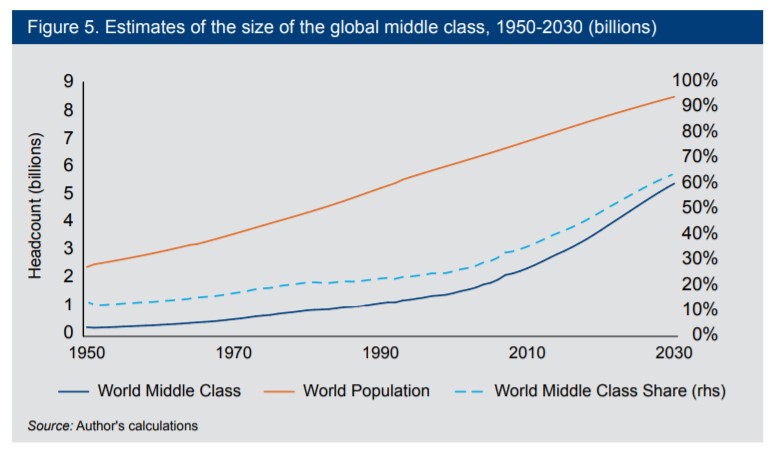 The report continues, “Figure 6 illustrates this point by showing the increases each year in the global middle-class headcount. The numbers start to accelerate after the turn of the century but peak prior to 2030. The figure also shows the impact of selected global economic events. 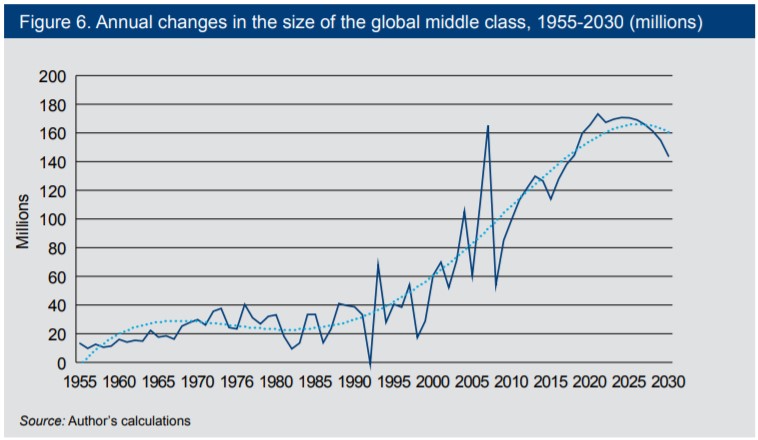 In 1998, the middle-class numbers fall as a result of the Asian financial crisis. In 2007, they soar as the global economic boom accelerates, but then collapse after the Great Recession of 2008. Looking to the future, the middle class is set to grow by 160 million people per year on average through 2030.

We are witnessing the most rapid expansion of the middle class, at a global level, that the world has ever seen. And, the vast majority— almost 90 percent—of the next billion entrants into the global middle class will be in Asia: 380 million Indians, 350 million Chinese, and 210 million other Asians.”

From Trend to Investment Thesis

Barron’s recently noted this trend and concluded, “These newly richer folks will want to go places, an observation borne out by the huge jump in air passengers—up four times—since 1985, according to the World Bank. This increase has weathered recessions, financial crises, and terrorist attacks.”

One specific stock to consider is Air Lease (NYSE: AL).

Air Lease has about $11 billion in debt and that debt is used to fund the company’s business model. AL borrows money to buy planes, which serve as collateral, and then loans those assets to carriers at a higher rate. Return on equity, which has grown sharply, was 20% in the first three quarters of 2018.

The stock is down, at least in part due to the fact that the airline industry and its suppliers have suffered with the rest of the market, as investors grow increasingly worried about a possible global recession this year or next.

Barron’s notes that decline provides an opportunity to long term investors, “For an investor with a two- to three-year time frame, however, this seems a relatively inexpensive price for a well-managed aircraft-leasing company. On the other side of a putative slowdown, the stock could approach its old high of $50.

A recession would be worrisome in the near term, but Air Lease benefits from two strong, long-term macroeconomic trends that show little sign of ending.

These powerful secular trends bode well for Air Lease, one of four major players and one with a young fleet. Air Lease serves 94 airlines in 56 countries.

The long-term outlook remains positive, says Chris Retzler, a portfolio manager at Needham Asset Management, which holds the shares. “Emerging markets will eventually recover and return to growth, and I like [Air Lease] at these prices,” he adds.

The company’s appealingly high return on equity is likely to decline in a recession, but the shares also trade at a price/earnings ratio of five times the consensus earnings-per-share estimate of $5.30 this year, compared with an historical median P/E of 14.

Barron’s considered the downside risks, “Let’s posit that a recession chops EPS to about half of that, or $2.65. Cyclical company P/Es contract in good times—like now—but expand in bad, and a recessionary valuation of 10 times gives a price of nearly $27, 15% below the current level. The dividend yield is 1.6%.

In prior years, Air Lease’s stock dropped ahead of recessionary concerns and then recovered within a couple of years. In good times, airlines lease aircraft to get access to more planes, and in bad times they lease aircraft to replace planes they have had to sell to bolster their balance sheets.

A global contraction will hurt, and new airline entrants, particularly across Asia—the fastest-growing market—could go belly up. That would be tough for the leasing industry to swallow in the medium term.

Yet the stock discounts much of that, and the risk-reward looking out a few years seems attractive.”

AL is an excellent example of how an investor could proceed from trend to stock. The trend in this case is the fact that the world’s population is increasing the number of potential air travelers. There are a number of ways to trade that idea.

AL could be appealing because it does not have to worry about fare wars or other operational questions airlines must consider. AL simply provides airplanes to companies that must address those questions. This makes it an interesting long term investment opportunity.