These Could Be the Best Recession Stocks

As the last recession, and bear market, was accelerating, a research report identified the stocks that had performed the best in downturns. The study appeared in Forbes in December 2008 which was months before the end of the bear market in March 2009.

That provides an important opportunity to review how the study held up in real time. Before doing that, we can consider the results of the study:

“We scanned Forbes’ list of the Best Big Companies in America to see which ones held up best this year and during the last recession in 2001.

Our list shows a few common theories hold true. One such concept is that people will still need basic goods, such as food or consumer products, even in tough times.

Church & Dwight Co. is a perfect example. The Princeton, N.J., company, which dates back to 1846, makes a variety of cleaning products and personal care items under its Arm & Hammer brand.

General Mills and Ralcorp Holdings , which both process breakfast cereal and other food items, also show share price gains during the past two recessions.

Another common belief is that with fewer dollars to spend, shoppers will seek bargains. Family Dollar Stores, Ross Stores and Wal-Mart Stores all fit this mold.

Buying items in bulk is another way to save in tighter times, an area in which BJ’s Wholesale Club specializes.

One theory that has not held up, especially in 2008, is that financial services are a safe place to invest during a downturn. We have only identified one Platinum 400 bank, Hudson City Bancorp that met our screening criteria.”

The companies identified are shown in the table below. 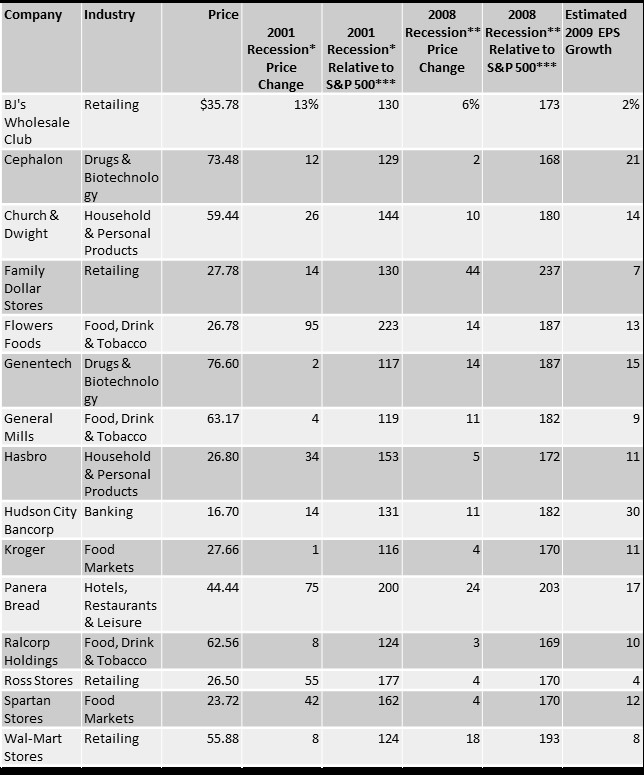 Based on the cutoff date of the study, it is possible to see how the stocks fared in the bear market that laid ahead of them at the time the study was published. The S&P 500 was, in hindsight, far from a bottom with the recovery more than three months away. Stocks would fall more than 20% after this study was published.

It is not possible to recreate all the history because of limitations of data. Not all companies are still traded.

BJ’s Wholesale Club Holdings, Inc. (NYSE: BJ) was taken private after the recession ended and is now trading again, since last September. The break in trading history limits the ability for analysis of how the stock held up in 2009.

Cephalon was acquired by Teva, and again is not available for analysis. Family Dollar Stores was subsequently acquired by Dollar Tree.

Other stocks on the list that were acquired include Genentech, Hudson City Bancorp, Panera and Ralcorp.

Spartan Stores is now known as SpartanNash (Nasdaq: SPTN). The stock lost more than S&P 500 during the bear market.

This brief look at the data shows the problem with trying to profit in a recession and a bear market. History shows that the average bear market decline associated with a recession is about 35% and most of the stocks trading in 2008 and 2009 lost at least that much.

An interesting conclusion from the study of the winners in the 2001 recession is that no two recessions are alike. Stocks that showed gains in the bear market that began in 2000 failed to do so in the next recession.

Investors are often reminded that past performance is not a guarantee of future performance and this means no investment manager is guaranteed to deliver results in the future that mirror the results of the past. That fact does seem to be well understood.

That actually makes sense since not all recessions are alike. In 2000, the recession followed a bubble in internet stocks and technology stocks were among the worst performers in that bear market. But that recession was relatively mild and the recovery began in a fairly normal manner.

Efforts to jump start the recovery after the next recession were anything but normal. Interest rates were cut to 5,000 year lows, not just in the United States but in major economies around the world. That recession was preceded by a financial crisis, with the home mortgage market being a central focus of the financial damage.

Yet, there is a future crisis that regulators have failed to foresee. That is not a fault of the regulators who are doing all they can. It is simply the nature of a crisis. It must be unforeseen or else prudent regulators, business executives and investors would avoid the problem.