The Truth Is Millennials Are Bullish for Markets 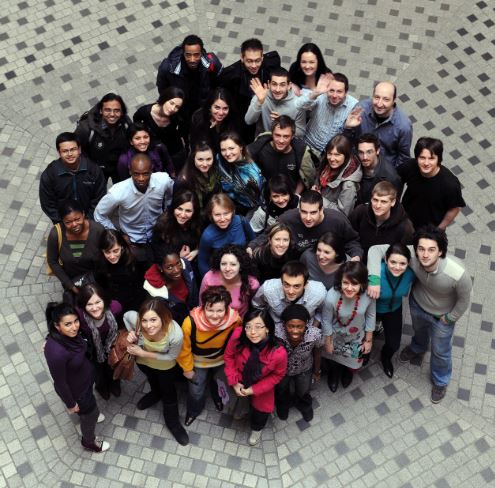 Imagine its 1984. The youngest baby boomers were turning 20 and the economy was about to be changed. To define the term, demographers and researchers typically use birth years starting from the early- to mid-1940’s and ending anywhere from 1960 to 1964.

This generation had college debt and the financial stresses of starting a family. And, the stock market was in the second year of what would be an almost uninterrupted 18 year bull market. Home prices, too, were rising as the boomers started buying homes and trading up to bigger homes.

The chart below starts in 1987 when data first became available. Home prices gained 30% in three years before slipping into the 1990 recession and then accelerating into a 26 year bull market.

You may be thinking that this is all history. And, of course, it is. But, we are at a similar demographic crossroad with millennials.

Before considering the impact this generation might have on financial markets, it is important to define exactly what the term millennials means. There is no precise definition that is widely accepted but there are generally accepted guidelines.

A 2018 report from Pew Research Center defines Millennials as born from 1981 to 1996, choosing these dates for “key political, economic and social factors”, including September 11th terrorist attacks.

This range makes Millennials 5 to 20 years old at the time of the attacks so “old enough to comprehend the historical significance.” Pew indicated they’d use 1981 to 1996 for future publications but would remain open to date recalibration.

There does appear to be a general agreement that the youngest millennials are about 20 years old now.

If you visit news websites on a regular basis, you may be familiar with headlines such as “Millennials ages 25-34 have $42,000 in debt.” Stories about more than $1 trillion in student debt are frequently featured and give the impression of an overburdened generation.

But, that is only part of the picture. The truth is millennials are a diverse generation, just as the baby boomers were and remain a diverse generation. There are some consumers struggling with student debt and some will be unable to own a home because of that burden.

But, there are others who own substantial wealth. The chart below summarizes wealth by generation and shows a fairly predictable path with wealth accumulating as the generation rises. 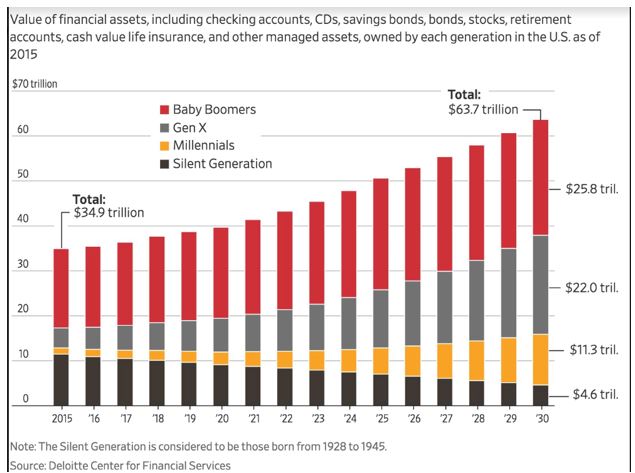 What could be interesting is that the wealth of millennials, an estimated $11.3 trillion, dwarfs the amount of student loans outstanding.

Student loans have been growing rapidly and it could be argued the growth has been too rapid. But, the total outstanding according to the Federal reserve is about $1.5 trillion, or about 13.2% of the generation’s total wealth.

Now, wealth and debt are not evenly distributed. Again, student loan debt is dooming some members of the generation to paying off debt for years. This will have an impact on the ability of those consumers to buy a home and to enjoy a higher standard of living and some debt is having tragic consequences.

But, overall, the millennial generation is holding tremendous wealth. This will affect financial markets and it will move stock prices and home prices as that wealth grows.

We know that not just because of the trillions of dollars this generation has already accumulated but also based on the size of the demographic group.In 2016, the Pew Research Center found that millennials surpassed Baby Boomers to become the largest living generation in the United States.

By analyzing 2015 U.S Census data they found there were 75.4 million millennials, based on Pew’s definition of the generation which ranges from 1981 to 1997, compared to 74.9 million Baby Boomers.

This demographic trend is likely to be bullish. Millions of workers are now contributing to retirement plans and that money will be slowly added to the stock market. Those dollars could be expected to offset the withdrawals baby boomers might take to provide retirement income.

This could affect the stock market in the same way that the boomers affected the market. A long bull market cannot be ruled out as a possibility.

However, the bull market that began in 1982 included several bumps. There was the October 1987 crash and the 1991 bear market. There were rolling bear markets such as the one that occurred in 1994 and less remembered crashes like the one in 1997 or 1998.

Millennials are also going to need homes. And, they may not want homes in the downtowns of large cities despite the many news stories to that effect now. This may be similar to the period in the 1980s when yuppies were living in cities and the news focused on how suburbs were not desirable.

If this generation does settle into homes in crowded cities, they will somehow to need to change those environments to accommodate growing families. Whether they move to the suburbs as previous generations did or not, there is likely to be a multiyear building boom.

It does seem unlikely, but the data is clear. There is a demographic wave pushing through the economy. Demographics is a factor that affects GDP so the millennials could be expected to contribute to economic growth.

This should push stock prices and when investors realize this could be a repeat of the baby boom bull market, multiple expansions could drive the stock market to a bubble like the one we saw in 2000. It’s not going to be straight up, but stocks and homes should be higher in the years ahead.