Last week’s news from the Federal Reserve was significant. After a two day meeting, the Federal Open Market Committee announced that no rate hikes are likely in 2019. But there was more as Yahoo Finance reported,

“At the conclusion of its Federal Open Market Committee meeting, the Fed also announced that it will slow the rolloff of its balance sheet in May and then conclude its reduction at the end of September.

In keeping interest rates steady at the current target range of 2.25% to 2.5%, the Fed said said that the labor market “remains strong” but said economic growth has “slowed from its solid rate in the fourth quarter.”

The decision to hold rates steady was widely expected; fed funds futures headed into the meeting priced in a 98.7% chance of keeping rates where they are.

The FOMC’s summary of economic projections reflected toward revisions across the board as policymakers dampen their expectations for rate hikes in the future.

The “dot plots,” which chart FOMC voters’ estimates for where they feel benchmark interest rates should be in the next three years, had the median dot for 2019 at the current level of 2.25% to 2.5%. 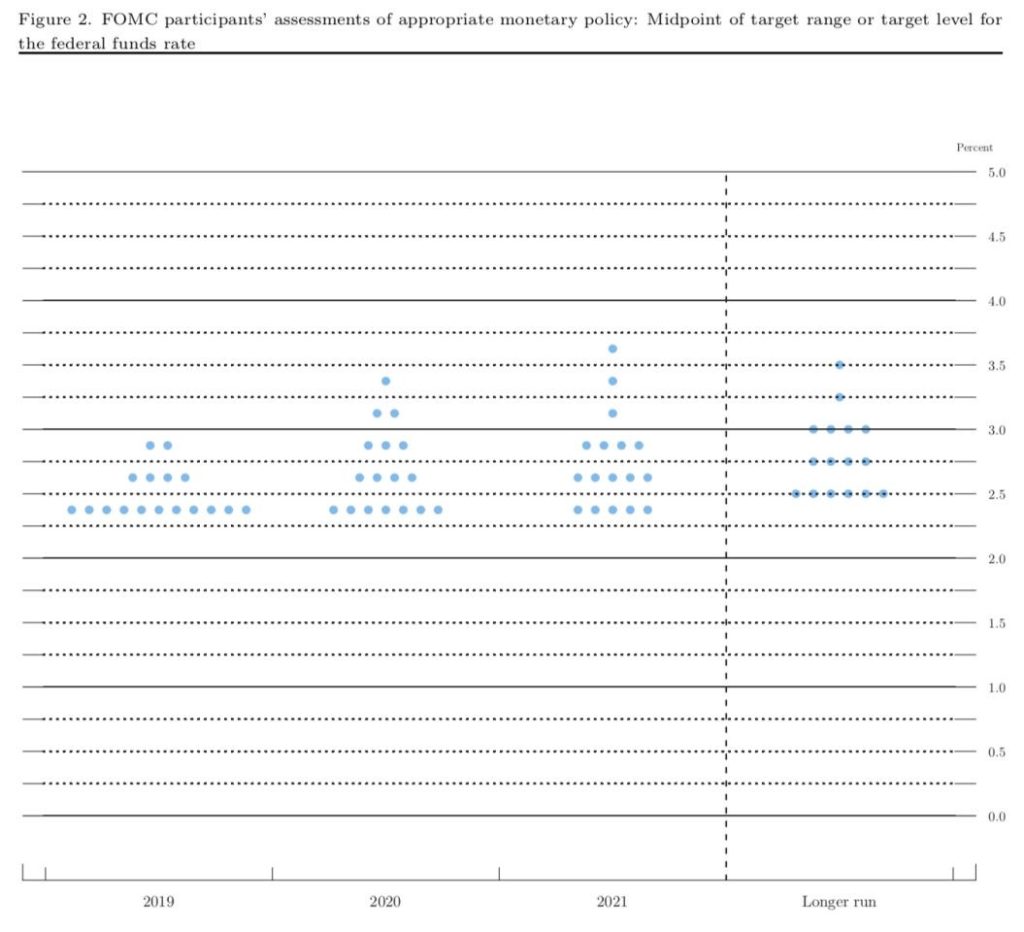 That view — that no rate hikes would be appropriate for 2019 — came from an overwhelming majority of participants: 11 out of 17.

For 2020, the median dot sits only 25 basis points above that level, telegraphing that only one rate hike could be in the cards through the end of next year.

Those projections are a significant downward revision from the December FOMC meeting where policymakers raised by 25 basis points and said the economy could absorb “some further gradual increases.” For comparison, the median dots in the December dot plot signaled two rate hikes for 2019 and a third in 2020.

The lower outlook on rates falls in line with the Fed’s slightly lower expectations for GDP growth.

Some commentators were surprised the Fed acted this way, worried that they are now following rather than leading the market. MarketWatch noted, “Even for a bond market bracing for an accommodative Federal Reserve, policy makers’ moves on Wednesday were a stunner, raising the specter of recession.

In particular, analysts said bond investors were taken aback by the sharp reduction of interest-rate-hike projections by the Federal Open Market Committee to zero from two back in December, as reflected in the central bank’s “dot plot” — a chart of Fed members’ projections for future rates.

On top of that, the Fed announced plans to end the runoff of its $4 trillion balance sheet in September and downgraded expectations for gross domestic product in 2019 to 2.1% from 2.3%.

Although the central bank held key rates at a range between 2.25% to 2.50%, as expected, the combination of other statements delivered a dovish jolt to fixed-income investors.

“This decision falls firmly on the dovish side of consensus as the about-face from ‘further gradual tightening’ has now reached a complete 180 degrees,” said Ian Lyngen, head of U.S. rates strategy at BMO Capital Markets, in a Wednesday note.

Lyngen said Tuesday’s rally in the bond market was justified by the Fed’s “dovish double-down,” referencing the decision by the FOMC in January to adopt a more patient policy after markets convulsed in late 2018.”

In the stock market, traders seemed to agree and major market averages were lower as the chart of the S&P 500 ETF (NYSE: SPY) shows.

After the Fed’s meeting, economists at the New York branch of the Federal Reserve lowered their outlook for the economy,

A positive surprise from the Philadelphia Fed manufacturing survey drove most of the increase for 2019:Q2, while higher-than-expected inventories accounted for most of the decline for 2019:Q1.” 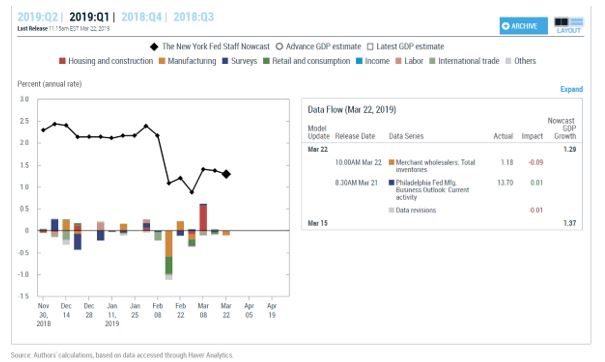 Analysts agree that the outlook for the economy is weaker,

“Now some on Wall Street are speculating the growth outlook is such that the Powell Fed will have to cut interest rates later this year. Wait, what?

“The Fed’s revised economic projections, which now imply no rate hikes this year, may have been a bit more dovish than most anticipated, but we think their underlying economic forecasts are still too upbeat. We expect economic growth to remain well below trend throughout 2019 which is why we think the Fed’s next move will be to cut interest rates,” says Capital Economics senior U.S. economist Michael Pearce.

“The decision to leave the target for the fed funds rate unchanged at 2.25-2.50% was unanimously expected, but the sharp drop in Treasury yields following the decision suggests investors were surprised by the dovish tone of the accompanying statement and economic projections,” adds Pearce.

“The Fed does not want to get into the business of predicting the outcome of political decisions, at least publicly, but the removal of both 2019 dots suggests to us that they are much more worried about external risks than we believe is justifiable as a base case,” Pantheon Macroeconomics Chief Economist Ian Shepherdson explains.”

If there is a bear market accompanied by a recession, the probability of a steeper than average decline should be expected. In the past, bear markets during recessions have resulted in price declines averaging more than 30%.

Investors could ignore the events associated with the Fed, but the possible risks are high and the potential gains may not outweigh those risks.