“At 35 days in duration as of Friday, the partial government shutdown has become the longest one on record, based on figures that go back more than 40 years.

President Donald Trump on Friday announced a deal to end the shutdown, but that’s after it turned into a historic one while dragging on.

It easily exceeded the prior record, which had been held by a 21-day closure during the Clinton administration that began in December 1995.

The chart below, based on Congressional Research Service data, shows how the current shutdown tops all other closures or gaps in funding in the last four decades.” 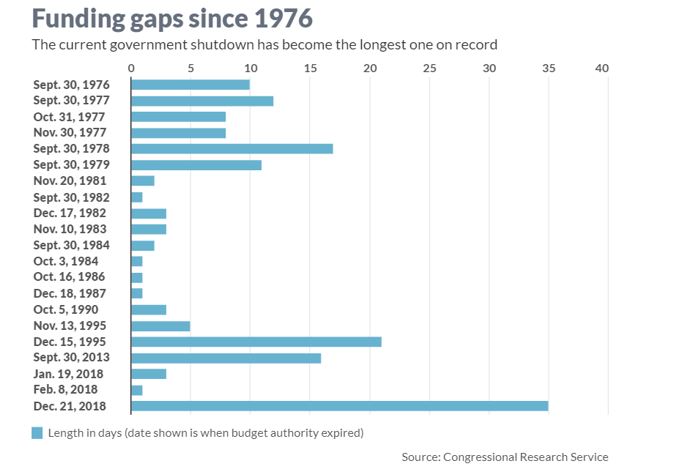 While this is the longest, there is a long history of shutdowns. This may be surprising to many since the news coverage indicates the shutdowns are partisan affairs and partisanship appears to be rising in the past few Presidential terms.

It is likely the extended shutdown had an economic impact. According to White House estimates, the impact could be significant. As CNBC reported,

“The Trump administration now estimates that the cost of the government shutdown will be twice as steep as originally forecast.

The administration had initially counted just the impact from the 800,000 federal workers not receiving their paychecks. But they now believe the impact doubles, due to greater losses from private contractors also out of work and other government spending and functions that won’t occur.”

After 35 days, or 5 weeks, the White House estimate implies a 0.5% hit to GDP. But economists interviewed by CNBC expected that deep a hit only if the standoff lasted longer.

“Mark Zandi, chief economist at Moody’s Analytics, forecasts a half a percentage point hit to GDP if the shutdown lasts through March, roughly a third of the administration’s new estimate.

On the other hand, Ian Shepherdson, chief economist at Pantheon Macroeconomics, believes the combination of the shutdown and the tendency of the first quarter to be statistically weaker than the other three means growth could turn negative.

“If the shutdown were to last through the whole quarter, we would look for an outright decline in first quarter GDP,” Shepherdson wrote in a report.”

With GDP already expected to slow, the shutdown could reverse the recovery that appeared to be underway in the economy. It’s possible the brief spurt in growth seen in the data could be ending.

“Analysts have noted that the impact of the current shutdown has been somewhat limited, as it’s affecting agencies that represent about 25% of total government spending. But the White House did double its estimate of the shutdown’s impact on gross domestic product.”

History also provides room for optimism. LPL Research recently studied previous shutdowns and provided a bullish summary of the past. 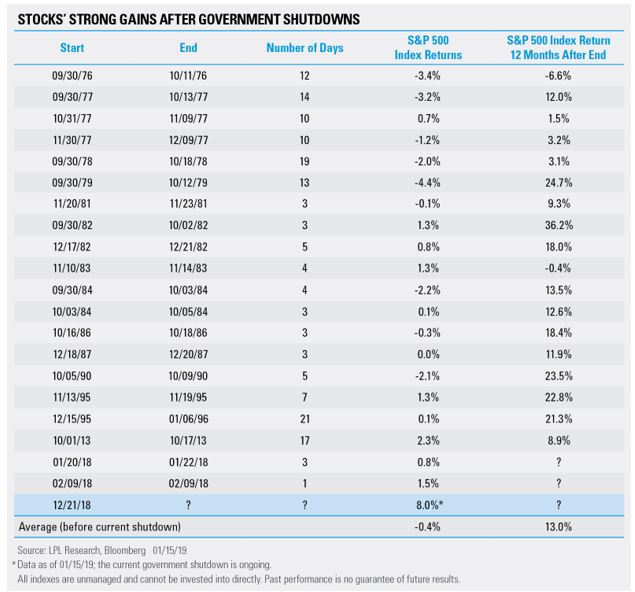 “It’s important to recognize, however, that the current shutdown has lasted for an unprecedented amount of time with no end in sight. The U.S. economy is also especially sensitive to a shift in confidence right now.

Consumer and business confidence gauges have declined from cycle highs recently as negative headlines from the U.S.-China trade dispute and geopolitical squabbles have rattled financial markets and soured sentiment. Government employees missed their first payday of 2019 on January 11, increasing tensions and pressure for a deal before the U.S. economy takes a material hit.

“A prolonged shutdown could have an outsized impact on consumer health as government workers pare back spending and other consumers feel the secondary impacts of lower demand and policy uncertainty.”

Right now, we believe this shutdown will have limited intermediate or long-term ramifications for economic growth, but it’s important to recognize that we’re in uncharted territory.”

It is important to note that we are in uncharted territory because the shutdown did last for an extended period of time and the effects were felt beyond Washington.

Airlines are one example of the impact with The New York Times reporting.

“It’s not just airport security lines and control tower workers that are affected by the federal government shutdown. Airlines, too, are being hit.

The industry as a whole lost about $105 million in revenue in the first month of the shutdown, according to data from the consulting firm ICF. That figure represents only the loss of revenue from some government employees not taking work trips.”

Estimates are that the revenue hit could total $15 million for Southwest and $25 million for Delta. These revenue shortfalls could drive earnings below expectations and result in market weakness.

Time added, “When government employees spend less, stores and restaurants that serve them suffer. So do landlords and lenders that do business with federal workers. Though spending and growth will rebound once the government reopens, most of the restaurant meals missed and hotel stays canceled will never be made up.

“Creditors and suppliers hit by the shutdown will become less patient if it drags on,” Ian Shepherdson, chief economist at Pantheon Macroeconomics, said in a research note. “People and businesses are being hurt by the shutdown, and the pain will intensify.”

We know dividends have rewarded investors for at least 100 years, at least since John D. Rockefeller said, “Do you know the only thing that gives me pleasure? It’s to see my dividends coming in.”