Is the Selloff in Cryptos a Buying Opportunity?

When prices fall, bears like to say, “I told you so.”

That might seem like a good idea, but a better idea would be to ask “is this is a buying opportunity?” With the recent crash in cryptos, now is an ideal time to consider what cryptos might be worth.

Cryptos don’t have earnings and they don’t generate cash flow. In this way, they are similar to gold. If you own gold, you know you are doing so to protect or grow wealth. You understand there are no potential dividends and if you own physical gold there could even be costs associated with holding the position.

Despite its shortcomings, gold has value.

That value fluctuates over time and there will be declines in value but, overall, gold always has some value despite the fact that there is no rational way to value gold.

However, there could be a target value for gold, or other assets that don’t generate cash flows. Many investors believe that they should place 5-10% of their portfolio into gold. Not all investors own gold so the likely percentage of wealth in gold is likely to be less than 5%.

Knowing how much gold is available for purchase and how much wealth there is in the world we could then derive a target value for gold.

Well, that same approach could be applied to bitcoin as one economist did. Tyler Cowen, of George Mason University, wrote:

“This estimate claims there is $241 trillion of wealth in the world, make of that what you will (there is something nonsensical about such aggregate measures because they are not traded against anything).  If you imagine people wish to hold one quarter of one percent of that in crypto form, that gets you to about $600 billion in value.”

How Well Does That Approach Work?

The World Gold Council estimates that about 40,000 tonnes of gold is held by private investors. This would be about $1.88 trillion worth of gold, or about 0.8% of wealth. When government holdings are added to the calculation, about 1.5% of wealth is in gold.

We know that many investors ignore gold and others gain exposure through mining stocks. The estimate of 1.5% of wealth in gold positions is most likely in line with the total holding of the metal, and exchange traded finds (ETFs) backed by the metal.

This approach is necessarily inexact but, based on the value of gold, this approach does seem to be a reasonable basis for valuing the aggregate holdings of an asset class that produces no cash flows of any kind for its investors.

Cryptos fit into that category. New reports from Venezuela indicate there is at least some degree of similarity between gold and bitcoin in a crisis. As one story noted:

“In the midst of a financial crisis with inflation nearing 2,000%, Venezuelans are using bitcoin to pay for groceries, medical bills, even honeymoons. Unaffected by the economic crisis, bitcoins gives users an alternative to black market worthless government currency.”

The same was true in Zimbabwe and in some ways, digital currencies may be more appealing than gold to many individuals as a crisis hedge. It’s more portable and can easily cross borders without being confiscated.

Now, returning to Cowen’s estimates. He is most likely being conservative suggesting that investors will be allocating perhaps 0.25% of their wealth to cryptocurrencies. But, as with gold, the total will be smaller than expected because many investors will not participate in the market. It might be 0.5% or even 1% but is unlikely to be much more than that.

However, gains in bonds will at least partially offset losses in stocks for many investors and other investors will benefit from trades in volatility products. Real estate assets could also increase in value. In other words, the real value of wealth will change but may not change as much as expected by some.

In cryptocurrencies, bitcoin represents about a third of the total market. That provides a target market cap of about $200 billion. Recent price declines have pushed the value of all outstanding bitcoins to less than $150 billion.

Based on that method, bitcoin is potentially undervalued by more than 30%. 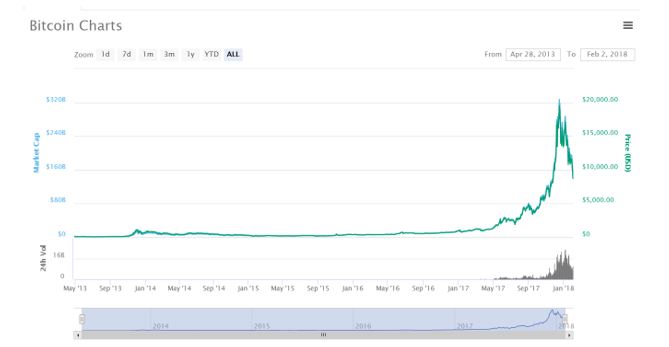 Now, at its peak, under this method, bictoin was potentially overvalued. The target value for bitcoin, using this valuation model, is about $11,800.

Of course, the method described here could be applied to any digital currency that is traded. According to one source, there are more than 1,500 currencies being traded. Each of these will have some share of the market and that market share could be used to find a target value.

This approach makes trading digital currencies similar to trading stocks in at least one way. Valuation would be the driving force behind buying and selling. This would be a disciplined approach to trading the market.

As a relatively young market, the concept of valuation might not be in widespread use. That should change, in time. But even before valuation models are generally accepted in the market, traders following a disciplined approach to buying and selling should have a better chance at profits than traders acting in an undisciplined manner.

We do know from more mature markets that disciplined investors tend to fare better over time. And there is no reason to expect that rule not to apply in new markets like cryptocurrencies.