Selling Could Be the Most Important Part of Investing

A recent study found that professional investment managers are fairly good at picking stocks to buy. Their research efforts are mostly targeted at this goal and there is a less structured process when it comes to selling. This could be costly, the study found.

Institutional Investor recently summarized the findings of the team which included researchers from the University of Chicago, Carnegie Mellon University, investment data firm Inalytics, and the Massachusetts Institute of Technology.

The study, “shows that institutional investors’ decisions to sell assets suffer because they tend to spend more time on the buying process than the selling process.

Earlier research has shown that individual investors tend to be driven by different psychological processes when they buy and sell securities, according to the paper. This paper is one of the first to show the phenomenon in portfolio managers, however.

The paper, entitled “Selling Fast and Buying Slow: Heuristics and Trading Performance of Institutional Investors,” analyzed the daily holdings and trades of institutional portfolio managers from 2000 to 2016.

Authors Klakow Akepanidtaworn, Rick Di Mascio, Alex Imas, and Lawrence Schmidt evaluated 783 portfolios, which averaged in size of approximately $573 million in assets under management. A total of 4.4 million trades were analyzed, according to the paper.

This is especially true when it comes to assets that post “extreme returns,” both positive and negative. Portfolio managers decide to sell these assets at a 50 percent higher rate than assets that simply over- or under-performed, the paper shows. 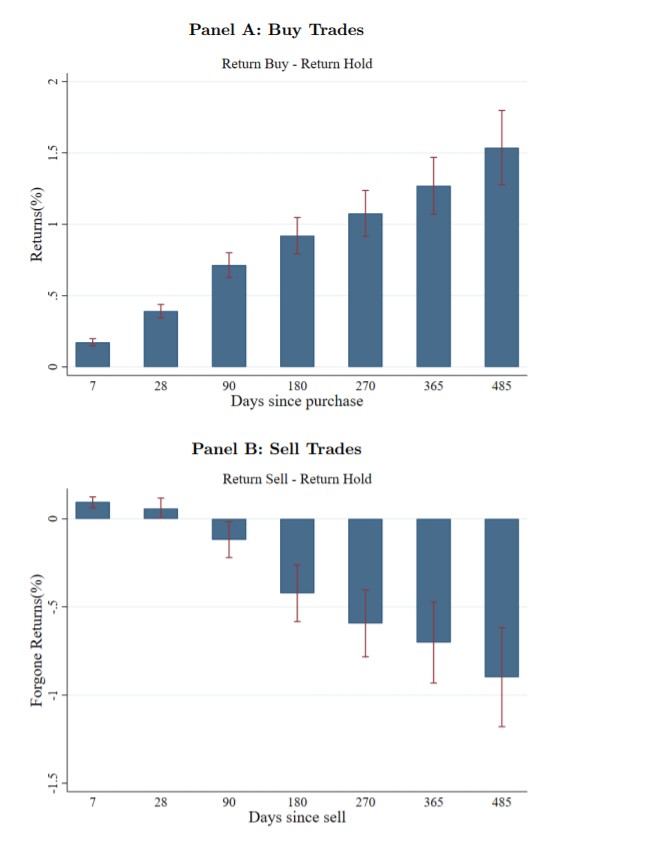 “This strategy is a mistake, resulting in substantial losses relative to randomly selling assets to raise the same amount of money,” according to the paper.

According to the researchers, it does not seem like portfolio managers lack selling skills altogether, however.

In fact, the researchers were able to show that during earnings season, when information from companies is widely available, portfolio managers’ selling decisions outperformed a control group by between 90 and 120 basis points (0.9 percent and 1.20 percent) per day.

At the same time, the researchers showed that there were no major differences between buying during earnings season and outside of it.

In other words, when portfolio managers were focused on company-specific information, they were able to improve their selling performance.

So why do portfolio managers struggle with the timing of when to sell assets? While the researchers said they do not have direct evidence for these reasons, they were able to provide an explanation after they interviewed several portfolio managers.

These managers, according to the paper, view buying and selling as two distinctive processes, and as a result, do not allocate the same amount of time or energy to each.

As one portfolio manager told the researchers: “Selling is simply a cash raising exercise for the next buying idea.”

Few researchers or analysts have focused on selling. One who has is Donald Cassidy, was senior research analyst for Lipper Inc., a Reuters Co., from 1990 to 2006. Don’s work includes the book, “It’s When You Sell That Counts” which is now in its third edition.

The American Association of Individual investors has summarized Don’s work in an article called, “When to Sell a Stock: Practical and Profitable Rules.”

The article begins by noting the problem – “Selling is the hardest part of investing. Yet it must be done. If you cannot sell, your current portfolio will become your heirs’ problem.

Because market psychology works on us all as investors, you must specifically work on learning to sell well, or you will predictably do it badly.”

The article includes a number of important points, including advice to:

In short, you should try to spend about as much time thinking about which holdings to sell as you spend deciding which stocks to buy. You should also never hold on to a stock that you would not buy again at today’s price.

“You should view holding as buying “again” for tomorrow. What you would not buy you ought to sell, since holding it depends on greater fools to support its price!”

Don notes that analysis is needed to make rational selling decisions, an idea that can summarized simply as:

“Hope is a major sign of troubled thinking in investing or trading. You should sell if your outlook is based solely on hope.”