Retail Isn’t Dead, and Here’s a Trade for the Sector

It’s an old story by now. Retail is dead, and, at least to some degree it is because shoppers are tired of malls. No one seems to be quite sure what killed the regional mall. Maybe it was the long walk from the parking lot, or the long walk between stores. It could have been the lack of sales staff.

The basic cause, however, didn’t really matter to one of the most popular stories in the financial and general media over the past year. But the story might be a little overdone. In fact, retail might not be dead. In fact, it looked very much alive on the day after Thanksgiving.

According to The New York Times, “Retailers and analysts said Black Friday 2018 got off to a strong start — and all indications were that it finished strong, too.

“Adobe Analytics, reported that as of 8 p.m. Eastern, consumers had already spent about $4.1 billion on Black Friday — a 23 percent increase from the same period last year.”

Though the cold weather in the eastern United States may have kept some shoppers home, Mastercard SpendingPulse said that generally “online sales appear to be filling in any weather related soft spots in brick and mortar sales.” The clothing, electronics and interior furnishing sectors were seeing especially good traction, the analysis said.

The upbeat prognosis was supported, at least in part, by photos and videos posted Friday morning on Twitter, which showed long lines and bunches of bundled shoppers gathered at places including a Kohl’s in Mansfield, Mass., and the Mall of America in Bloomington, Minn.

“Stores are busy, there’s good traffic, the queues are manageable and well-staffed, and inventory levels appear to be good for the time of day too,” said Frank Layo, managing director of Kurt Salmon, which is part of Accenture Strategy. “Retailers helped themselves by starting promotions much earlier this year to spread out the holiday shopping traffic and mitigate chaos. Their efforts appear to be paying off.”

There are a number of reasons retail could prosper.

“The economy has been on good footing for the last few years” and federal income “tax breaks have flowed through to retail sales,” says D.J. Busch, a managing director at Green Street Advisors, a commercial research and advisory firm, recently told Barron’s.

Still, Busch warns that the quality and prospects of regional malls vary considerably. So, investors should do due diligence on properties these REITs own. Green Street’s concerns include the continuing onslaught from online retailers and “uncertainty about how the department store landscape is going to shake out,” he says.

Department stores, which are typically anchor tenants, historically have been growth drivers for malls, but their ranks have been thinned by bankruptcy filings, most recently by Sears Holdings, and retrenchment by Macy’s, J.C. Penney, and others. “

There is too much unproductive retail space in the U.S.,” Busch says. While the nation has 1,000 malls, he estimates that there’s enough demand to solidly support only 300.

This means that investors should be selective and Real Estate Investment Trusts (REITs) could be a way to obtain to access the sector without picking individual winners and losers.

REITs are popular income investments because tax rules require the structure to pay out at least 90% of their taxable income to shareholders.

Many regional mall REITs sport dividend yields in the mid-single digits or higher, as the accompanying table shows, and have solid economic prospects. For example, Simon Property Group (SPG) raised its earnings guidance for its current fiscal year, which ends next month.

Busch says that retail REITs “in general are going through a massive change,” partly to attract younger customers who want different facilities at malls than do older ones. That includes restaurants, movie theaters, and even bowling alleys.

He describes an industry that’s becoming increasingly bifurcated between top-notch properties that have capital to invest in growth and lower-quality ones that don’t. “Lower-quality properties are not getting better,” he says.

“High-quality properties are at least stable, if not improving.” Operators with deeper pockets are in a much stronger position. “The capital required to own and operate regional malls has gone up,” says Busch. It’s important to invest in REITs on the right side of that trend.

Finding Value in the Sector

REIT-owned regional malls’ same-store net operating income for properties open for at least one year rose 2.1%, on average, in the third quarter, their best showing in 18 months, according to the Nareit, a trade group that represents REITs of all stripes.

Calvin Schnure, senior vice president, research and economic analysis at Nareit, says that malls in which REITs invest are better positioned than those held by others. “There are more potential shoppers with more money to spend in the neighborhoods around a REIT-owned mall,” he maintains.

According to Nareit, the average household income within five miles of a REIT-owned mall is $66,148, compared with $60,877 for other malls.

And, Schnure adds, after anchor-store departures, REIT-owned malls “line up new tenants a lot faster than a mall that doesn’t have the population density and the higher incomes in the areas around it.”

Among retail REITs, Simon Property (NYSE: SPG) has returned more than 10% since the start of the year. Simon is the largest mall REIT by market capitalization and number of malls owned among the five shown in the table below. 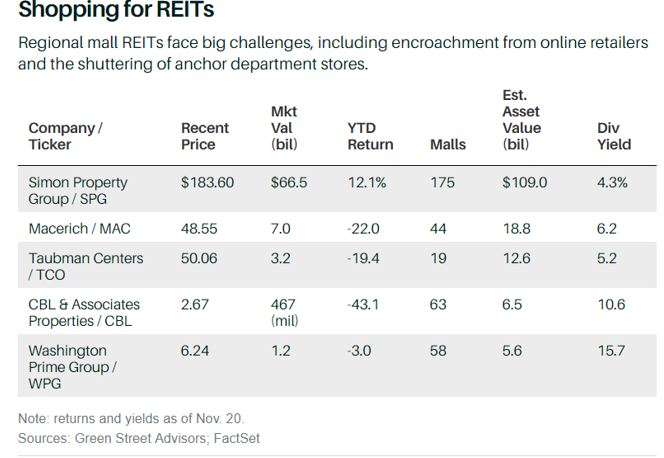 SPG has done well but remains well below its all time highs.

Investors should not extrapolate the trend from strong sales on one day. But they should consider that the death of retail is a story made for headlines. The truth is that there will likely be a shakeout in retail. There will be survivors, but they can be hard to find.

Instead of buying the stores, investors could consider the REITs that offer space to the stores. Even as some retailers meet their demise, the property owners like SPG still own assets that could be leased to new entrants to the market.

Plus, REITs offer income that could be beneficial in any market downturn.