Prohibition Is Over: How Marijuana Differs from Alcohol 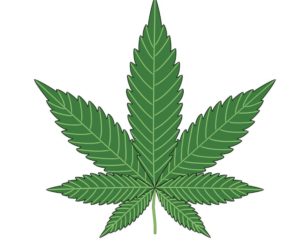 Prohibition in the United States was a nationwide constitutional ban on the production, importation, transportation, and sale of alcoholic beverages from 1920 to 1933.

Many communities in the late-nineteenth and early-twentieth centuries introduced alcohol prohibition, with the subsequent enforcement in law becoming a hotly debated issue. Prohibition supporters, called “drys”, presented it as a victory for public morals and health.

Finally, the entire nation became dry under the Eighteenth Amendment to the United States Constitution in 1920. Enabling legislation, known as the Volstead Act, set down the rules for enforcing the federal ban and defined the types of alcoholic beverages that were prohibited.

For example, religious use of wine was allowed. Private ownership and consumption of alcohol were not made illegal under federal law, but local laws were stricter in many areas, with some states banning possession outright.

But, alcohol never fully went away. Criminal gangs were able to gain control of the beer and liquor supply for many cities. This led to “wets” arguing that prohibition was responsible for causing crime, and lowering local revenues.

Prohibition ended with the ratification of the Twenty-first Amendment, which repealed the Eighteenth Amendment on December 5, 1933. Some states continued statewide prohibition, marking one of the last stages of the Progressive Era.

You might be asking what this has to do with investing? Well, the prohibition of marijuana is ending and studying history could help investors prepare for what comes next.

Barron’s recently noted that “Marijuana is now legal in Canada and cannabis stocks have a combined market capitalization of $27.4 billion. That number was $9.2 billion at the start of the year…

But now what? …the larger North American Marijuana Index is down 21% since hitting a 52-week high just a week ago, on Oct. 16. Should investors jump in now that the sector is in bear-market territory?

There might be only one market precedent for the rapid legalization of a formerly controlled, mind-altering substance: The end of Prohibition.”

The author then looks back, describing how companies that made distilled alcohol fared after the end of prohibition. 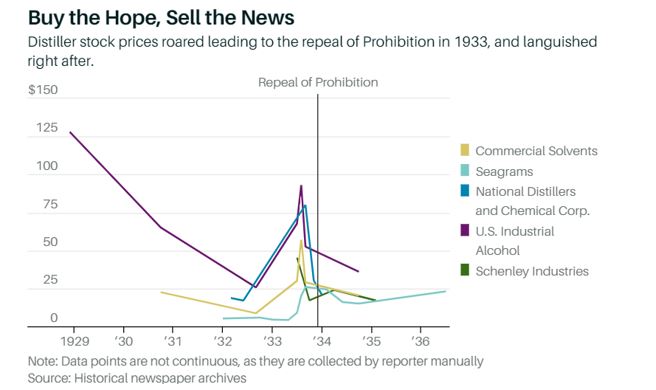 This chart shows, “The distiller stocks peaked in July 1933, and shortly after that The Wall Street Journal’s Pure Gossip column opined that many felt the stocks had gone ahead at too rapid a pace.

Unfortunately for anyone hoping to jump on the pot stocks bandwagon, booze stocks languished into 1934. You had to be early to ride the post-Prohibition trade. However, company profits and company stock prices diverged. The end of Prohibition was good for bottom lines.” 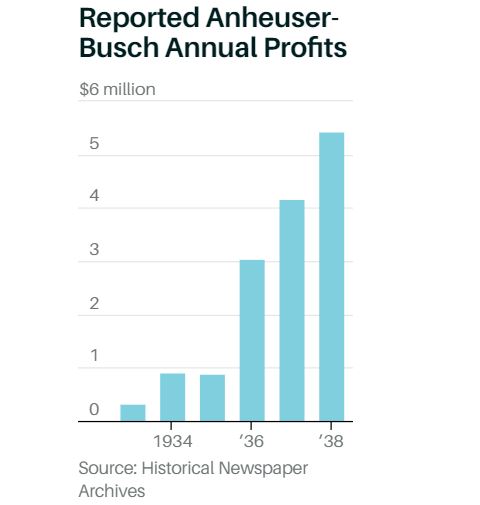 Anheuser-Busch was making Budweiser beer when Prohibition ended but was nit a publicly traded company until 1938 so it’s stock performance can not be considered for that time frame.

The chart above focused on alcohol distillers. These companies make alcohol but alcohol has a number of uses. Even in prohibition, alcohol was manufactured for industrial uses and for processing other products. It’s unfair to consider alcohol and alcoholic beverages as the same thing.

The profits for Anheuser-Busch show the story of alcoholic beverage makers. There the story is as one would expect with legalization adding to the growth of profits for the company. That could be the case for marijuana companies in the current market.

The chart of stock prices also holds some important information for investors considering the marijuana sector. Seagram’s is included in the chart and this is a company that was focused on alcoholic beverages rather than alcohol.

You may be familiar with Seagram’s because the company is thriving, even today. And the chart shows that the price of Seagram’s stock rose after the repeal of Prohibition. This could be the closest company in that chart to today’s marijuana operations.

Buying the largest stocks in the industry could be one way to increase the potential for profits in the long run. Amazon.com, for example, was one of the largest companies in the 1990s and survived to deliver large gains to investors.

Among the largest companies in the growing marijuana sector is Canopy Growth Corporation (NYSE: CGC). The stock did pull back after legalization in Canada but could be preparing for another up leg.

It’s important to consider that the pull back in the marijuana industry came as the broad stock market sold off. Major market averages sold off and are more than 10% below their highs, and that loss came at the same time as marijuana legalization in Canada.

That means the selling in marijuana stocks may be unrelated to news about the industry. It could be just a normal move for a volatile sector in a bear market. It could actually be a time to buy as the sell off creates opportunities in an expanding sector.

The largest stocks are likely to be among the winners in any industry. They carry risks, but are generally less risky than smaller stocks.

It’s not surprising that analysts will draw different conclusions from history and arrive at different opinions about the prospects for marijuana stocks.

The truth is that While marijuana is likely to be a large market, there will be winners and losers and times when some companies soar while others languish. In short, it will be like other volatile sectors. But, the opportunities for gains may be larger than average in the new market that is being created.

But, marijuana is likely to make millionaires out of investors who make the right trades. We’ve put together a special report that can help you navigate this emerging market. You can access that report by clicking right here.