Many investors are familiar with the news that the yield curve inverted. The yield curve defines the relationship between Treasury securities.

Bloomberg took a broader view at the news and explained,

“Demand for government bonds gained momentum Wednesday, when U.S. central bank policy makers lowered both their growth projections and their interest-rate outlook. The majority of officials now envisages no hikes this year, down from a median call of two at their December meeting.

Traders took that dovish shift as their cue to dig into positions for a Fed easing cycle, pricing in a cut by the end of 2020 and a one-in-two chance of a reduction as soon as this year.

“It looks like the global slowdown worries have been confirmed and the market is beginning to price in Fed easing, potential recession down the road,” said Kathy Jones, chief fixed-income strategist at Charles Schwab & Co.

“It’s clearly a sign that the market is worried about growth and moving into Treasuries from riskier asset classes.” 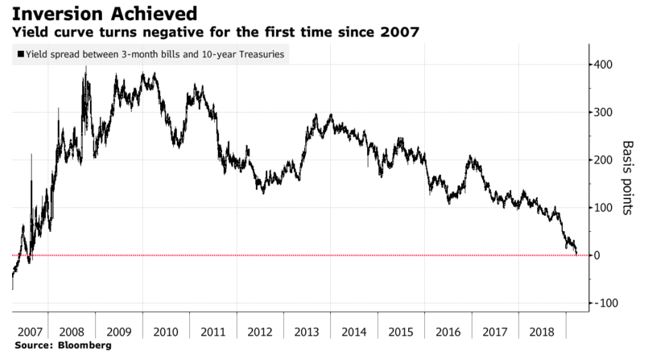 The wave of buying that’s cut the 10-year yield by nearly 20 basis points in the last couple of days has global catalysts, too. Weaker-than-expected European factory data that helped drive benchmark German yields back below zero on Friday also supported the move.

An upended 3-month to 10-year curve is widely favored as an indicator that the economy is within a couple of years of recession. And Friday’s move is an extension of the inversion at the front end of the curve that happened in December. The gap between the 2-year and 10-year yields has also narrowed, to around 11 basis points.

That said, many downplay the curve’s predictive powers. Some argue that technical factors have distorted the curve’s shape and signaling capacity, particularly as crisis-era policy has tethered yields for the past decade. A downturn may be drawing near after what has been close to the longest expansion on record, however the market provides no precision on when it will happen.

While the 3-month to 10-year spread “has a relatively decent track record of predicting recessions, it suffers from a timing problem,” said TD Securities U.S. rates strategist Gennadiy Goldberg. “Its inversion can suggest a recession occurred six months ago or will occur two years from now.”

Less noticed than the inversion was an event in Germany where yield on 10 year bonds dropped below zero. Bloomberg reported,

“German 10-year bond yields dropped below zero for the first time in more than two years after the nation’s manufacturing sector fell deeper into contraction, compounding fears of an economic slowdown across the euro area.

The securities, seen as some of the safest that investors can buy, have rallied this year as inflation and growth data have disappointed, while the global economic outlook has also worsened. Friday’s move reverberated through to global markets, with the yield on benchmark Treasury notes falling to the lowest in more than a year. 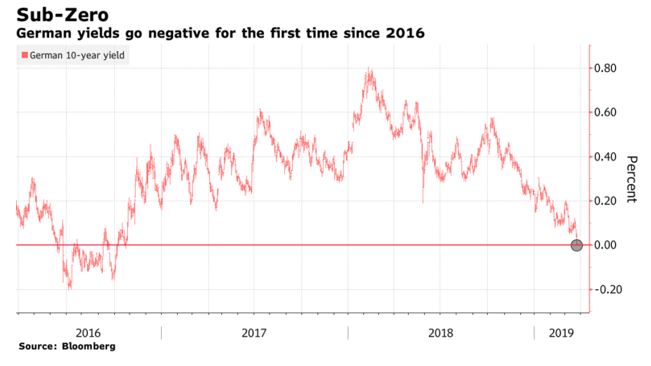 Bund yields last dropped below zero percent in 2016, when the European Central Bank was still pumping money into the economy and the U.K. voted to leave the European Union.

The slide below the threshold again, following the conclusion of the ECB’s bond purchases and as the Brexit deadline approaches, has led to increased fears of a so-called Japanification of the region, where inflation, growth and yields remain permanently low.

“The breach of zero underlines how the Fed, BOE and ECB have created a carry environment and a hunt for yields that we haven’t seen for years,” said Arne Lohmann Rasmussen, head of fixed-income research at Danske Bank A/S. “It’s the crux of current market sentiment.”

The IHS Markit’s Purchasing Managers’ Index for German manufacturing fell to 44.7, the lowest since 2012 and well below economists’ median forecast of 48.

The data underlines why market expectations for the ECB’s first interest-rate increase since 2011 have been pushed toward the end of 2020, with the Federal Reserve also having put its rate-hiking cycle on hold.

Demand for German bonds has also been boosted by political risks, from Brexit to Italian instability. EU leaders have staved off the risk of the U.K. crashing out of the bloc without a deal next Friday but only gave U.K. Prime Minister Theresa May an extra two weeks.

The German data was also followed Friday by a contraction in euro-zone manufacturing. Signs of a weaker economy in Europe and the U.S. or Brexit uncertainty may push bund yields further into negative territory, according to Rabobank.

“On top of the signal sent by the PMI manufacturing data, this comes on the back of dovish central banks,” said Antoine Bouvet, an interest-rate strategist at Mizuho International Plc. “The stars did align for this sort of move.”

What It Could Mean for Investors

This are important developments for investors to consider. There could be a global recession either underway or approaching.

Stock market prices are believed to discount the future which means that current prices reflect conditions that will occur in the future. In other words, if there is a recession in the future, stock prices are likely to fall before the recession even begins.

This is a warning for investors. Now could be the time to become more conservative in a portfolio, taking profits on some positions and allowing cash to build up. If aggressive positions are opened in the portfolio, it could be best to view them as short term trades with relatively close stops.

Options could also be used, perhaps buying long dated put options as insurance against a steep decline. Options carry limited risk and could deliver large gains if there is a significant decline in stocks. This could offset losses in other positions and allow an investor to recover from a potential bear market in less time.