Monetary theory, according to Investopedia, “holds that change in money supply is the main driver in changes in economic activity. When monetary theory works in practice, central banks, which control the levers of monetary policy, can exert much power over economic growth rates.”

Central banks have historically managed monetary policy for governments for the past century. But it wasn’t always that way.

Now, “it is the job of the Federal Reserve Board to control the money supply. The Fed has three main levers: reserve ratio, discount rate and open market operations. The reserve ratio is the percentage of reserves a bank is required to hold against deposits.

A decrease in the ratio enables banks to lend more, thereby increasing the supply of money. The discount rate is the interest rate that the Fed charges commercial banks that need to borrow additional reserves.

A drop in the discount rate will encourage banks to borrow more from the Fed and therefore lend more to its customers. Open market operations consist of buying and selling government securities. Buying securities from large banks increases the supply of money while selling securities contracts money supply in the economy.” 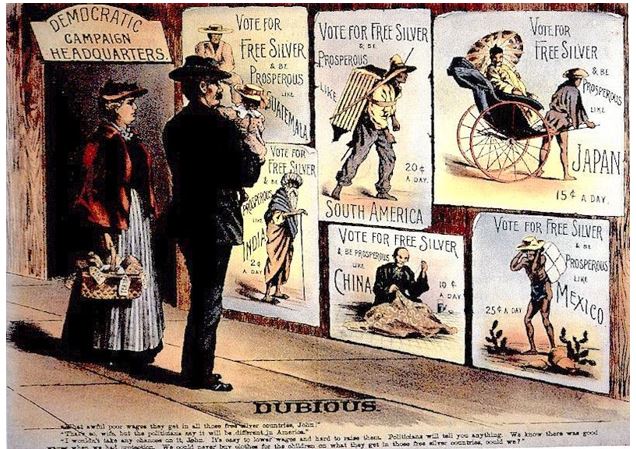 The issue was bimetallism, the economic term for a monetary standard in which the value of the monetary unit is defined as equivalent to certain quantities of two metals, typically gold and silver, creating a fixed rate of exchange between them.

Gold advocates argue cheaper silver will permanently depress the economy, but that sound money produced by a gold standard can restore prosperity. That led to the image above which is an 1896 Republican poster warning against free silver.

In recent years, monetary policy has been less important to the public but that may change with the emergence of a new theory.

Modern Monetary Theory, or MMT, according to TheMacroTourist.com economic blog, “is a macroeconomic theory that contends that a country that operates with a sovereign currency has a degree of freedom in their fiscal and monetary policy which means government spending is never revenue constrained, but rather only limited by inflation.

MMT’ers believe that government’s red ink is someone else’s black ink. Sure, the government owes dollars, but they have a monopoly of creating those dollars, and not only that, the creation of more and more dollars is essential to the functioning of the economy.

The government can keep spending until they begin to crowd out the private sector and compete for resources.

And in fact, Stephanie Kelton argues it is immoral to not utilize this power to fix problems in our society. From an interview she gave,

“if you think you can’t repair crumbling infrastructure or feed hungry kids, unless and until you find some money somewhere, it’s actually pretty cruel because you leave people who are struggling in a position where there are still struggling and they are hurting, and they are not properly taken care of…”

In one of the interviews I watched with Professor Kelton, she said that the idea of deficits being funded with bond issuance is purely a self-imposed limitation. It’s required by law, but in reality, it doesn’t need to be done. The law can be changed. The government could simply spend $100 while only taking in $90 and directly writing cheques against the Federal Reserve to pay for the $10.”

This could become inflationary and that has implications for investors. The author concludes that, “MMT would scream that the best course would be to buy real productive assets hand over fist.

“Like I said, you may not have heard about MMT yet. But you will. You won’t be able to avoid it. Why? Because MMT is the post hoc justification of both easy fiscal policy and easy monetary policy. As such, it is the new intellectual darling of every political and market Missionary of the Left AND the Right.”

And, he notes it is gaining rapid acceptance.

The chart below is “a map of all non-paywalled US media articles on MMT over the past year, colored by recency (blue older and red more recent). Only 272 unique articles over this span (although 3x from the prior year), but you can see where this is going.

Twelve months ago, this was a fringe issue, negatively portrayed in the press.” That’s shifted dramatically in recent weeks. 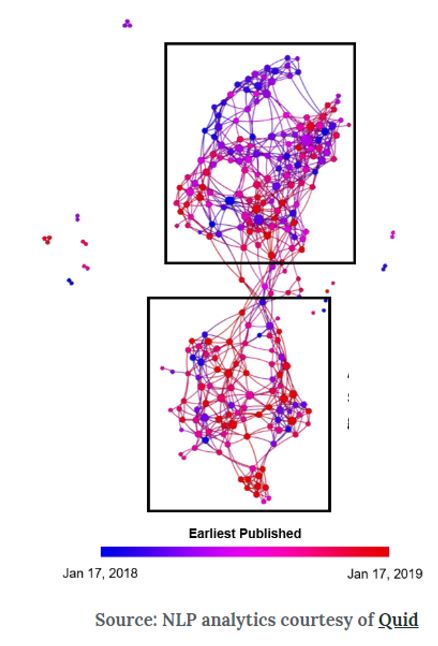 Hunt also contends that MMT will switch QE’s inflation in financial assets to inflation in the real world. This is potentially bullish for gold and commodities and potentially devastating to fixed income investments.

Now could be the best time to prepare for this shift, before the mainstream media starts covering the story in detail.

One strategy would be to simply buy gold which already appears to be moving to the up side.

The chart above uses weekly and includes the stochastics indicator at the bottom. Stochastics is a popular momentum indicator that often moves higher at the beginning of an up trend and remains elevated for extended periods of time.

New highs in gold, or the SPDR Gold Trust (NYSE: GLD) ETF shown in the chart above, could be bullish for gold in the long run. Other investments could be silver, industrial metals or miners and producers of precious and industrial metals.

Oil and natural gas companies could also benefit from inflation as could agricultural commodity producers. Financial stocks and utilities, safe havens in noninflationary environments, could be among the largest losers if inflation takes hold in the long run.