Is There Really an Existential Crisis in Value Investing? 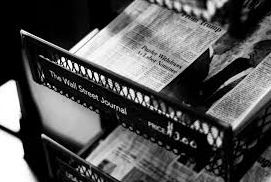 The Wall Street Journal was clear. And, it was the type of headline that we saw way back in 1999. Back then, the questions were about Warren Buffett. The ultimate value investor seemed to be facing a historic market shift and he was doomed, according to experts.

The chart below shows the performance that prompted questions about Buffett.

The greatest value investor in the world was underperforming the broad stock market for years. Analysts questioned if Buffett had missed a change in how markets work. At the time, Buffett ignored tech, arguing that he invested in companies he understood.

Time proved that Buffett was right. He did miss the entire bubble in the stock market, and by the time stocks bottomed in the fall of 2002, Buffett’s reputation as a great investor remained intact. So did his long term record of beating the market.

For investors with a sense of history, the feelings of that era may have come rushing back when they saw the recent Wall Street Journal headline, “Value Investors Face Existential Crisis After Long Market Rally.”

The story began with a summary of how the market has been ignoring value for years:

“Hunting for cheap stocks has been out of favor for so long that some self-proclaimed “value” investors are embracing a broader mandate, a potentially costly move in the later stages of an economic cycle.

Many such buyers have drifted away from the hallmark of value investing championed by the likes of Benjamin Graham and Warren Buffett : actively picking stocks the market has overlooked. Those legendary investors assessed what they called a company’s intrinsic value and compared it with metrics such as its cash flow and price-to-book ratio, a measure of net worth.

Value stocks—traditionally shares of consumer-staples companies, basic materials firms and big manufacturers, among others—have been stuck in a rut for most of the nine-year rally in U.S. stocks. The Russell index of 1,000 of the biggest value stocks in the market has fallen 2.1% in 2018, the fifth straight year—and the 10th of the past 11 years—that the index has lagged behind its growth counterpart, which is up 6.9%.”

The chart below shows the problem in a way that mirrors the underperformance of Berkshire Hathaway in 2000. 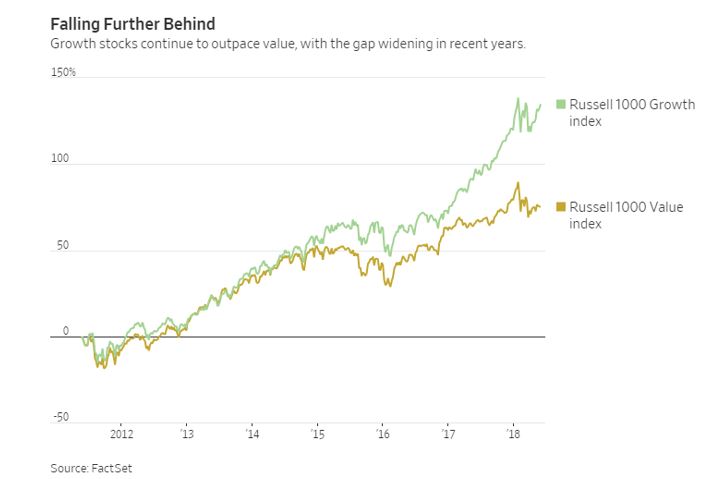 The question is whether investors will react as Buffett did in 1999 and continue with their disciplined approach. Some are already showing signs of changing with the times.

For some value investors, there has been an evaluation of what exactly value means in the current market.

For him, just like it did for many others including a large number of individual investors, the 2008 financial crisis marked a turning point. It marked a significant change in the monetary regime as broadly accommodative monetary policies led to a general increase in the prices of stocks and other assets.

Spahr has focused on financials in this environment, trying to determine which banks are in a position to surprise the market with higher capital returns or faster dividend growth during their annual stress tests.

“We had to become slightly more tactical and trade a little more. There’s more awareness of what the catalyst events are,” he said. His performance shows the shift in thinking has paid off with the fund he manages down slightly this year after gaining a respectable 10% last year.

The shift in tactics has changed the pace of trading in the fund which still looks to hold stocks for about three years. But, now the investment team will add to or sell down individual positions to boost or protect returns based on their analysis of those banks.

His fund has also blurred the line between value and growth, taking stakes in Microsoft Corp. and UnitedHealth Group Inc., two stocks that Russell Indices classify as growth stocks. “Anybody who is surviving in this world as a value investor has had to run outside the value benchmarks.”

Running outside the value benchmarks can allow value investors to justify buying shares of Amazon.com Inc. or Netflix. They can argue those companies are still undervalued by the broader market, despite their high valuation ratios.

The chart below shows Amazon’s price to earnings (P/E) ratio has fallen to about 125, half the peak ratios. It’s not a traditional value stock but is a top performer in the stock market.

Critics call it portfolio window dressing to boost returns. When managers engage in window dressing, they buy popular stocks to show their investors they are in touch with the broad market. But, often they take a position size that is too small to have a meaningful impact on performance.

Window dressing seems to be justifiable in the current market.

“The FANG stocks are so dominant in those benchmarks that to not own them, you got really hurt the last few years,” he said. So, you had to have those in your portfolio to keep up with other growth managers.”

Managers in the value space seem to be evolving rather than facing an existential crisis. That could be prudent since the goal of an investment manager is to keep assets under management so that they can keep investing.

In the long run, value is likely to deliver market beating returns. But, history shows the strategy can underperform for years at a time. As Buffett demonstrated, the underperformance is often followed by an extended period of outperformance.

However, to benefit from the times when value beats the market, investors need to stick with the strategy even when they face an existential crisis.