Investment Picks of the Bond King

If an investor is managing billions of dollars, fees will be substantial and some of those fees are expected to be allocated to research in order to maintain a performance level that can be expected to help the investor maintain the funds under management.

For this reason, it could be helpful to consider what the best ideas of the biggest investors are. Among the largest investors is Jeffrey Gundlach, the founder of DoubleLine Capital LP, an investment firm. He was formerly the head of the $12 billion TCW Total Return Bond Fund.

At TCW, he finished in the top 2% of all funds invested in intermediate-term bonds for the 10 years that ended prior to his departure when he founded Double Line.

In 2009, Gundlach founded Doubleline, along with Philip Barach and 14 other members of Gundlach’s senior staff from TCW. Barach was Gundlach’s co-manager of the TCW fund. In a February 2011 cover story, Barron’s called him the “King of Bonds”.

Since then, he has made some timely calls and some calls that did not meet expectations.

According to reports, “On March 9, 2011, Gundlach was quoted on CNBC that “Munis Are The New Subprime.” “You’ve got a history of low defaults, which is comforting. But that kind of sounds like what subprime sounded like back in 2006,” Gundlach said.

Gundlach pointed out that even if defaults do not ultimately climb as high as critics like Meredith Whitney had warned, muni bonds will likely trade much lower.

“Between here and the end game, lies the valley. And the valley is full of fear. I think the muni market is going to go down by at least, on the long end, something like 15 and 20 percent,” he said.

The next day, Gundlach reportedly liquidated 55 percent of his personal holdings in municipal bonds. However, the decline he predicted did not occur and on the same day as his liquidation, the Bond Buyer Index closed at 106, with this index closing at 119 on December 30, 2011, up +12.9%.

At the time, Gundlach also stated: “Nobody owns California general obligation bonds because they think it’s an improving credit story,” he said, drawing chuckles from the audience.

However, since March 2011, the ratings of California General Obligation bonds improved from A- to AA- by Standard and Poors and from A1 to Aa3 by Moody’s. Despite that miss, in 2012, he was included in the 50 Most Influential list of Bloomberg Markets Magazine.

He maintains a position as one of the most influential investors.

Contrarian investing is defined by Investopedia as “an investment style in which investors purposefully go against prevailing market trends by selling when others are buying, and buying when most investors are selling.

Contrarian investors believe that people who say the market is going up do so only when they are fully invested and have no further purchasing power. At this point, the market is at a peak. So, when people predict a downturn, they have already sold out, and the market can only go up at this point.”

Taking a contrary position to Gundlach’s muni call could have been profitable as the chart of iShares National Muni Bond ETF (NYSE: MUB) shows.

Of course, Gundlach has an extraordinary long term track record and it could be useful to consider his best ideas for the coming year that were reported in Barron’s. Those ideas are shown in the next chart. 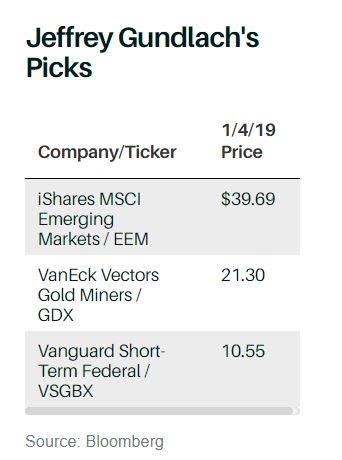 You will notice that, for a long time after Jan. 26, the S&P 500 outperformed the global stock market, excluding the U.S. In the fourth-quarter rout, however, emerging markets started to outperform. Emerging markets aren’t a value trap anymore. Even with the headwind of a strong dollar, they are outperforming.”

EEM is shown next.

His idea related to gold is based on what he sees as macroeconomic trends, noting:

Gold and commodities broadly should benefit this year, although I worry about the economic scenario for industrial commodities. To be aggressive, you could buy the VanEck Vectors Gold Miners ETF. It is a leveraged play on the price of gold. That is what I recommend.”

Of course, there are other trades for gold however Gundlach seems to recommend diversified investments which could be an excellent approach for individual investors. This theme is evident in his third recommendation, as well.

Gundlach concluded, “in the bond market, I don’t like to tout DoubleLine’s products, so I’ll go with a low-cost, one- to four-year average maturity U.S. Treasury fund. How that’s for unsexy? It’s Vanguard Short-Term Federal fund.

I don’t invest in anything with a maturity of five years or longer. I’m concerned about U.S. budget problems leading to a potentially much steeper yield curve, so I want to stay relatively short term. The Vanguard fund is a laddered fund.

As bonds mature, the money is reinvested. You will compound your gains if interest rates go higher.”

Of course, investors could use this as a starting point for their own research and could build their own bond ladder, identify potentially market beating gold mining stocks and research markets and companies in the emerging market space.

As an alternative, a small allocation to these investments or an investment in a DoubleLine product would also benefit from Gundlach’s expertise.