Investment Lessons from a Great Economist

Few economists gain fame. When they do, it can be from an error. Irving Fisher, for example, developed the basic ideas behind the time value of money but is best remembered for saying just nine days before the 1929 stock market crash, that stock prices had “reached what looks like a permanently high plateau.”

One economist who seems to have escaped this fate is John Maynard Keynes who is widely recognized as one of the 20th century’s most influential thinkers. 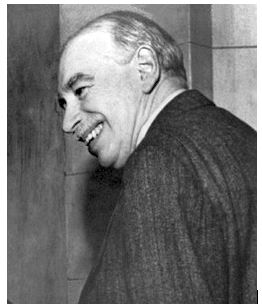 Keynes’ theories about economics changed how governments all around the world pursue fiscal policies, beginning in the Great Depression and continuing through the current day.

Keynes argued that economies are inherently volatile and unstable, leading to recessions at times and inflation at other times. The booms and busts of the economy could be mitigated by economic policy changes including monetary policy actions by the central bank and fiscal policy actions by the government.

This leads to government spending in bad times to boost demand and ease the effects of the recession. Government restraint in good times should temper the inevitable inflation. Governments still apply this model, to some degree.

While his economic theory is still widely studied, less attention is given to his investment skills which were significant.

An Investment Wizard and Professor

A professor, Keynes was charged with managing the endowment known as the Chest fund at his Cambridge college, King’s. From the time he began managing the fund until his death in 1946, the Chest fund grew from £30,000 to £380,000, an annual rate of return estimated to be about 12%.

Sources vary, and some estimate he fared even better on behalf of the college, averaging annual gains of 15%. Either result is commendable given that the broad stock market in the United Kingdom over that time provided an average annual return of just 8%.

This success followed his initial successes speculating for his own account. In that endeavor, he turned £4,000 into a fortune worth £57,797 between 1919 and 1924, an annualized rate of return of nearly 70%.

In amassing those gains, Keynes traded stocks, bonds and foreign exchange. He maintained high levels of margin and focused on the short term. But, he was not an infallible investor. He had a reported 83% of his assets in stocks in August 1929 and suffered large losses.

In fact, Keynes performance, while overall very successful, was at times volatile as the chart below shows. 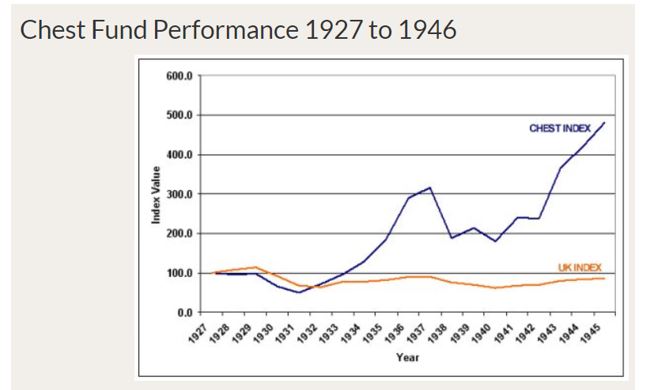 Reports indicate that the 1929 crash led Keynes to change his philosophy. Rather than focusing on market trends, he began to study individual companies and became what we now call a value investor.

Keynes said after this change, that he wanted to calculate the “ultimate value”, to be “satisfied as to assets and ultimate earnings power and where the market price seems cheap in relation to these.”

He also believed an investor should maintain a concentrated portfolio. This is similar to Warren Buffett’s advice to place all of your eggs in a single basket and to watch the basket closely.

In Keynes’ words, “the right method in investment is to put fairly large sums into enterprises which one knows something about and in the management of which one thoroughly believes.”

Keynes was as quotable in his day as Warren Buffett is in our day, and his quotes allow us to develop important lessons about investing based on his philosophy. According to MaynardKeynes.org, in general, Keynes believed:

In other words, Keynes recommended finding value, taking a few large positions, giving the positions time to grow but cutting losses when it apparent the initial buy was a mistake and spreading risks over several sectors.

This is important advice for individual investors to consider. The importance lies in the fact that Keynes evolved to a long term investment strategy after finding a great deal of success with highly leveraged short term investments.

The evolution of Keynes’ thinking seems to be grounded in his experience in the Great Depression. Even with his extensive understanding of economics, he was unable to avoid the crash. The same is true of the other great economist of the era, Irving Fisher.

It seems to have taken the crash for Keynes to learn what may be his most quotable insight into the behavior of markets, “The market can stay irrational longer than you can stay solvent.”

In the end, Keynes described the markets as a beauty contest.

The economist once explained that investors should think of the stock market in the way readers should play a newspaper’s beauty contest.

Readers with the highest number of correct guesses are then entered into a drawing for a prize.

Now, some readers will go a step further, or as Keynes wrote in his 1936 classic book, General Theory of Employment, Interest and Money:

In 2011, National Public Radio’s Planet Money put this idea to the test. They asked listeners to pick what they considered to be the cutest of three cute animal videos. 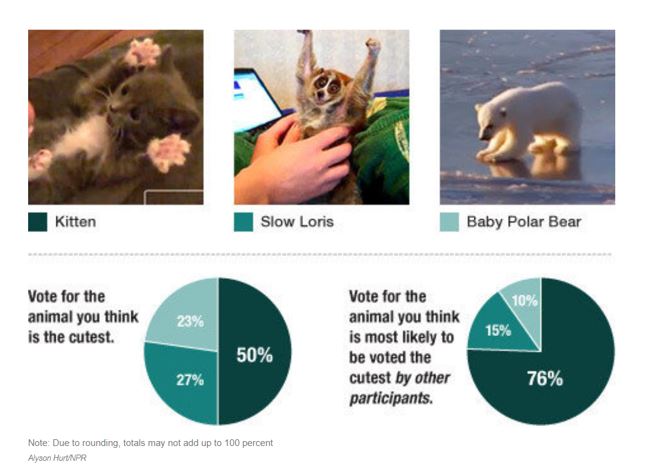 Half of the first group (50%) selected a video with a kitten. They thought that was the cutest video. In the second group, the ones predicting which video most people would find to be the cutest, 76% picked the kitten video.

NPR concluded these results were consistent with Keynes’ beauty contest theory. Individuals in the second group were generally able to disregard their own preferences and accurately make a decision based on the expected preferences of others.

After much consideration, Keynes seems to be telling us to think of beauty in the long run.