Investing like warren buffett – investing advice, Many individual investors wonder if they could be like Warren Buffett. They dream of buying and holding stocks for many years and accumulating great wealth. This dream is actually within reach for many individuals.

Who Is Warren Buffett?

Buffett is the chairman and CEO of Berkshire Hathaway (NYSE: BRK.B). He’s considered by many to be one of the most successful investors in the world. He is among the wealthiest people in the world with an estimated net worth of more than $90 billion, all of it earned from investing.

Berkshire Hathaway operates out of Omaha, Nebraska, giving rise to several of Buffett’s nicknames. He is often called the “Wizard”, “Oracle” or “Sage” of Omaha. His formal education includes a graduate degree from Columbia University where he learned value investing from Benjamin Graham.

Graham is considered to be the “father of value investing” and Buffett is his greatest pupil. After graduating from Columbia, Buffett eventually created the Buffett Partnership.

This investment firm would in time buy a textile manufacturing firm called Berkshire Hathaway and assume its name to create a diversified holding company. Buffett has been the chairman and largest shareholder of Berkshire Hathaway since 1970.

Over that time, shares of Berkshire Hathaway have delivered astonishing returns as the figure below, taken from the company’s latest annual report shows. 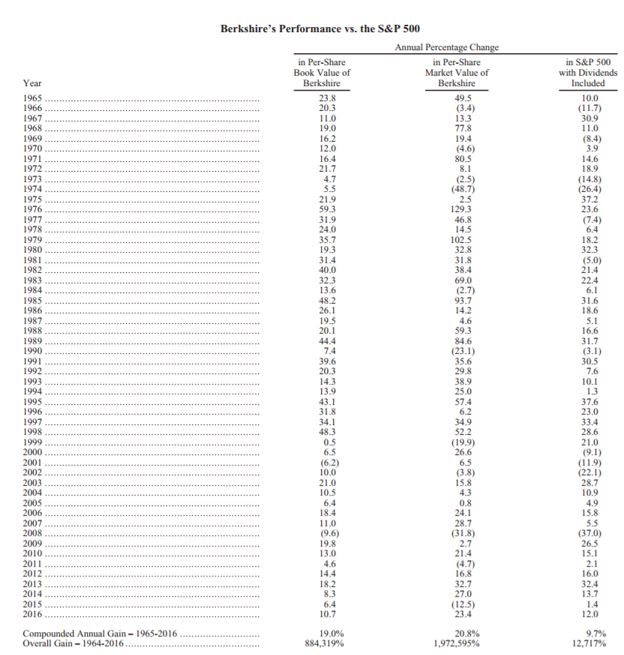 Share prices of the stock have grown an average of 20.8% and delivered a total return of 1,972,595%, more than 155 times the gains of the S&P 500, a benchmark index commonly used to measure the performance of the stock market.

While Berkshire Hathaway is often viewed as an investment company, it is an operating company as well. The company buys stocks and bonds for investments. It also buys companies and uses the cash flow generated by that company to invest in other companies or to buy more stocks and bonds.

Over time, in fact, Berkshire Hathaway has shifted from an investment company to an operating company. The next table shows that operations delivered larger profits every year since 2002. 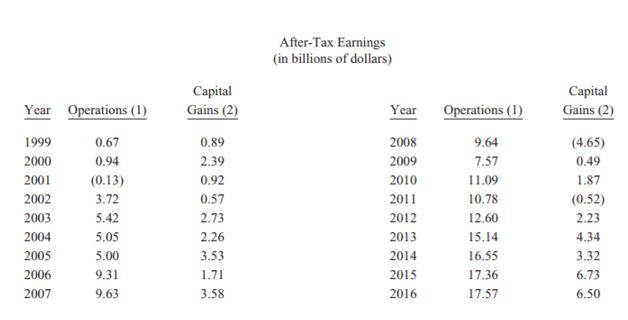 Buffett is certainly a great investor but, often overlooked is the fact that he is also a great manager. His combination of skills may be unique and that unique combination may be what accounts for his extraordinary success and great wealth.

Buffett himself has never explained how he makes investment decisions. From his public writing and statements, we do know he believes that value investing is the best approach to the markets. He has described value in memorable terms:

“Whether we’re talking about socks or stocks, I like buying quality merchandise when it is marked down.”

While Buffett has never gone into great detail on what he does, Mary Buffett spent more than a decade enjoying the wisdom of Buffett as his daughter in law and later wrote a book on what she learned.

After divorcing her husband, she wrote a book with David Clark called “Buffettology: The Previously Unexplained Techniques That Have Made Warren Buffett the World’s Most Famous Investor.” She presented a detailed stock valuation model that she learned from him.

Most analysts who have read the book agree that the model Mary Buffett presented is consistent with Warren Buffett’s own writings.

The first step is to estimate what earnings will be for a company ten years in the future. Buffett learned from his mentor, Ben Graham, that it is reasonable to project future earnings based on the annual compound rate of return of historical earnings.

The projected earnings per share figure can then be multiplied by the company’s historical average price-to-earnings (P/E) ratio to provide an estimate of what the stock should sell for at that time. This all sounds simple, but that again is consistent with Buffett’s approach. As he once said,

After determining expected earnings and a P/E ratio, the estimated future price is compared to the current stock price. According to Mary Buffett, Warren Buffett seeks out investments which can deliver a return of at least 15% a year. Only stocks that offer potential appreciation at this rate are considered as buy candidates.

That methodology can be reduced to a simple checklist:

When applying this checklist, individual investors can do better than Buffett. Because he is investing billions of dollars, he isn’t going to buy 100 shares of a stock trading at $2 a share. Even if this stock soars to $10, it will not have a meaningful impact on his wealth.

Smaller investors can buy smaller stocks, and this is where the fastest growth in the markets is likely to be found. The ability to trade small caps means investors can, in effect, buy companies Buffett wishes he could buy.

Another advantage of small investors is that they can play defense. As the chart below shows, shares of Berkshire Hathaway have moved sideways or down for years at a time.

Buffett cannot take defensive measures other than to raise cash. Selling could generate billions of dollars in tax bills. It’s also not reasonable to expect traders in his firm to move billions of dollars on shares in a nimble manner. They would move markets and create costs.

Smaller investors aren’t faced with these constraints. They will face manageable tax bills and can trade without moving markets.

It’s possible to learn from Buffett and use his strategy to find stocks. It’s a simple approach and one that could benefit smaller investors who in some ways have an edge over Buffett, since they face fewer restrictions than the Oracle of Omaha.