A recent study confirmed that parents should avoid saying things like “do as I say, not as I do” to children. The children learn from watching and the misbehavior of parents, even if the parents instruct kids to ignore it, sets a bad example.

Investors should learn from that study. As investors, we should assign more weight to what management teams do than to what they say.

If we listen to management on a quarterly conference call, the message is often upbeat. The company is generally on the right track and although there may be challenges, management is prepared for them and will do well in the long run.

Logically, that’s what we would expect management to say. We would sell the stock of a company if management said they were having problems but weren’t sure what the causes are and have no plan to overcome the challenges they face.

This means that we should focus more of our attention on what management does rather than what they say.

Management Shows More With Their Money Than Their Words

Managers have unique positions within a company. Their positions provide them with inside information, the kind of information that could benefit investors.

Insiders, like the company’s CEO and other C suite executives, know sales forecasts and results. They know about cost overruns or higher profit margins before the news is released. They have the information because it is their job to know more about the company than outsiders could know.

In other words, if management knows bad news is coming, they cannot sell ahead of the news. A recent example of this was in Equifax, the credit reporting company. The Securities and Exchange Commission (SEC) is reviewing sales of managers who sold before the company publicly announced a data breach.

This means that if managers know bad news is coming, they may not sell but they would almost certainly not be buying. It turns out buying could be the most significant action managers take in their companies.

It’s not generally a good idea to own an excessive amount of stock in the company you work for, from a personal financial planning perspective. The problem with this is that if the company does poorly, your job is at risk at the same time your investments are declining in value.

Insiders know this, so their buying shows a high degree of conviction in the future.

Because of their unique positions, insiders are required to report all transactions to the SEC. This can be a lot of data to sort through and there is generally a lot of information that will not be helpful. For example, stock grants are not providing information that is helpful to individual investors.

A stock grant will be a form of compensation. The acquisitions that are more important are the ones where insiders place their own money at risk. Because this is subjective, the investor will need to consider various factors about the information.

An example of what could be considered important is below. 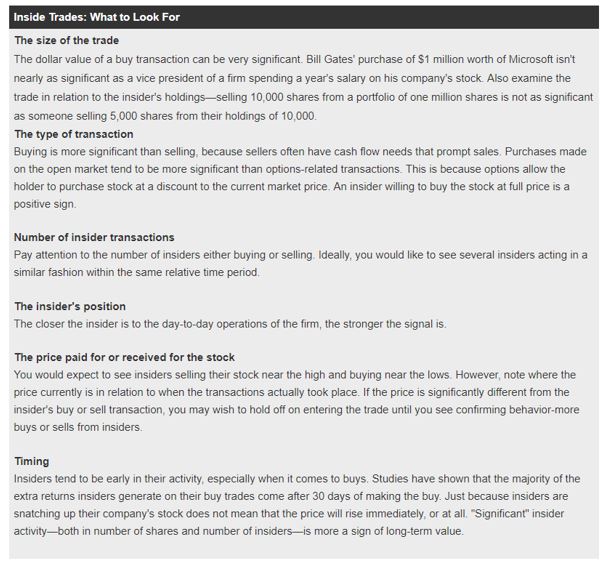 At times, this information can be useful but overall, insider buying should be just one factor that is considered. A screen based solely on this factor has underperformed the market in the long run.

This screen considers all purchases. Large purchases could be meaningful as a starting point for research.

Barron’s recently reported that, “An AbbVie director has just made the largest insider stock purchase since the drug maker was spun off from Abbott Laboratories in January 2013.

Glenn F. Tilton, retired chairman and chief executive of UAL, a predecessor company to United Continental Holdings (ticker: UAL), paid $496,270 on June 27 for 5,400 AbbVie (ABBV) shares, about $91.90 each. That’s the largest open-market purchase of shares by an insider in terms of volume and dollar value. He now owns 39,735 shares.

Tilton is AbbVie’s lead independent director and has been on the board since 2013. He was reelected in May and his term now expires in 2021.

Tilton’s purchase is also his first as an AbbVie insider, making his transaction seem even more bullish.”

We don’t know what Tilton likes about ABBV. But, we know he is putting his own money into the company. He could believe in the growth of the company or he simply sees little risk at this point. All we know is he is making a large investment when he could use that money for any other investment.

This is a starting point for research. The chart could be the next step in the process.

The weekly chart above shows that ABBV is in a pullback after an extended rally. The stock is near support, and that support level is near the price the insider used as a buy point. In fact, the pullback seemed to offer the insider a desired entry point.

Earnings per share are expected to grow at an average of approximately 17% a year over the next five years, an above average pace of growth. That implies the stock should trade with an above average P/E ratio.

Overall, ABBV appears to be undervalued. The 52-week low offers a nearby risk level and a new low could be a sell signal. The insider trading activity in this stock highlights what appears to be a low risk trading opportunity with a large potential reward.