Many investors are pleased that 2018 is over. Some analysts are calling it the year that no one made money. This assessment is in part based on a chart showing the large number of asset classes ended the year lower. 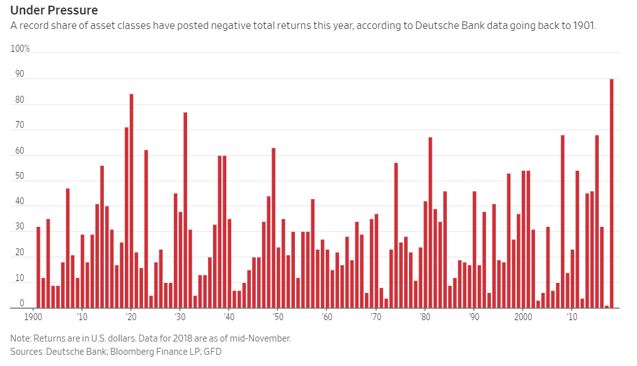 The Wall Street Journal noted “All told, 90% of the 70 asset classes tracked by Deutsche Bank are posting negative total returns in dollar terms for the year through mid-November. The previous high was in 1920, when 84% of 37 asset classes were negative.

Home prices are shown in the chart below. This is a broad index of prices, the S&P/Case-Shiller 20-City Composite Home Price Index. Of course, all real estate is local and many home owners did not enjoy the kind of gains shown in the chart.

These returns affected small and large investors, even some of the best investors who run large hedge funds.

A Mediocre Year for Funds?

Characterizing hedge fund performance is difficult to do since there are so many funds and so many different type of strategies. But according to CNBC, the results for 2018 were good for some. The business news network reported the average fund struggled but some performed well.

“Hedge fund returns for 2018 are trickling into investors’ inboxes.

Some investors — including many who invest in quant funds and larger, established names — will be pleasantly surprised by the numbers in what was otherwise a challenging year in a variety of markets.

Other investors, especially in equities-oriented funds, will be disappointed by losses that even surpassed that of the S&P 500, which was down about 6.7 percent last year.

CNBC has collated 2018 performance details from people familiar with the performance. All of the below numbers are attributed to sources unless otherwise specified. Representatives for each firm declined to comment.

For the most part, many of the established names with billions of dollars in assets were the stellar performers of 2018.

All of these funds utilize some sort of algorithmic trading, although some employ it more than others.

Other so-called multi-strategy funds also were able to beat the S&P 500 by a slightly lower margin.

While those were the stars, not all funds delivered including some of the biggest names in the industry:

“Several multibillion dollar hedge funds opened their coffers to new investors this year with much excitement. Their returns, though, were a little more muted.

For example, Steven Cohen reopened his Point72 Asset Management to outside investors for the first time after his former firm was banned from doing so. Cohen picked up about $5 billion in new money this year.

But Point72 returned about half of a percentage point for investors, preserving capital and outperforming the S&P 500, but not generating outsized returns.”

According to MarketWatch, one well known fund manager has some ideas investors should consider when making their plans for this year:

“DoubleLine Capital founder Jeff Gundlach has warned that the market downturn could be a prolonged one. He’s back with more advice for investors, earning a spot in our call of the day.

After a major meltdown in December, junk bonds have been having a revival of sorts lately, but Gundlach told investors Tuesday to use those gains “as a gift and get out of them.”

Instead, he suggests looking for companies with strong balance sheets. “That’s going to be the way to survive the zigzags in 2019,” said Gundlach, in his annual “Just Markets” webcast Tuesday. And while some say investors may be looking for signs of recession that aren’t there, he said junk-bond spreads are among those “flashing yellow” on that front.

Gundlach also tossed some shade at Fed Chairman Jerome Powell’s rally-inspiring comments last Friday, as he said the central bank chief “went from pragmatic Powell to Powell put and the markets have been throwing a party since then.” He added that the way investors have been piling into the market lately looks similar to what was going on in the credit market before the last big financial crisis.

Other snippets of advice included a call to invest in emerging market stocks over the S&P, especially if the dollar weakens; avoid the value trap in Europe; and for the brave, bitcoin could crawl back to $5,000.

One more thing, Gundlach thinks U.S. national debt is “horrific,” describing it as akin to every U.S. household maxing out three credit cards with $5,000 limits.”

Given the risks he sees, Bitcoin or other cryptos could be an appealing trade for aggressive investors right now.

It could also be important to remember that cash is an asset and in a bear market, older investors can be fond of saying they are more concerned with the return of their capital rather then the return on their capital.

The return of their capital means that safety is a priority and they want to reduce the risk of a large loss. The return on their capital represents investment returns and many returns will be negative in a bear market.

Now could be an ideal time to consider safety and follow strategies with limited risk including options strategies like spreads.