Here’s Why You Should Know Your CEO’s Age

Value investing is one of the simple concepts in finance that is difficult in practice. The concept is to buy stocks that are undervalued, wait until they are fully valued or even overvalued to capture a profit, and repeat the process with an increasing amount of wealth.

There could be thousands of investors looking for stocks with low price to sales (P/S) ratios, low price to book (P/B) values or low price to earnings (P/E) ratios. This can be useful but is unlikely to result in an unusual level of success since so many investors are looking at that same information.

This is a more complex challenge since the information may not be easy to access. But it could be more rewarding and many investors, especially professional analysts and portfolio managers, will look at less popular data. But they may not talk freely about what they do, concerned they could sacrifice their personal edge by sharing their methods.

When Investment Pros Talk, It Could Pay To Listen

Because not all professionals will talk, it can be useful to pay attention to the ones that do, especially when the investment pro goes in depth discussing their techniques.

“I’m looking for events that can move a stock more than 10%: mergers and acquisitions and corporate restructurings, including spinoffs. Management change is a big one. Another is changes in the shareholder roster.

That usually comes after a series of missteps, and can be a turnaround opportunity. Shareholder activism is in there, too, and occasionally, environmental matters.”

What’s important to consider is whether or not individual investors can work towards that same goal and Bilson says his process is accessible to individuals, noting

“You’d be surprised…. Everything we do is traceable to publicly available information. We’re not really dealing so much in innuendo, but what, exactly, are companies saying on conference calls? And by exactly, I mean that we parse the adverb.

If the adverb changes from quarter to quarter, we’re the ones to amplify that. Corporations stick to scripts. When they change the script, it means a lot.

And it’s overlooked. If you’re not paying close attention to it, you’ll miss the important pivots that companies are telling you [about] without really telling you.”

Transcripts of calls, and previous calls for comparison, are available on a number of web sites for free. Some companies make the calls available on their investor relations web site so that an individual investor could listen to the tone of the CEO’s voice, just like analysts do.

Now, one of the reasons value investing is difficult is because investors can find value, buy the stock and then the stock fails to move. This is the risk of a value trap, a stock offering value but instead presenting a trap to investors which traps funds that could be employed elsewhere.

To reduce this risk, Bilson “We watch price action pretty closely—which stocks are moving; why are they moving. What’s the volume behind these moves? Who owns the stock?”

Bilson also looks at data that is publicly available but maybe often ignored by many investors, professionals and individual investors alike. One factor that could be overlooked, and that Bilson finds useful is:

“CEO age is important. Older CEOs are dangerous CEOs. Older CEOs are the ones who make moves. So we pay very close attention to 62-, 63-, 64-year-old CEOs, especially those without succession plans. Those are the people who make news.”

Barron’s followed up a question, “Where do you find information about CEO succession plans?” and Bilson responded,

“Sometimes, it’s obvious—say, a promotion to chief operating officer made by a 64-year-old CEO. That person is going to be the CEO in two years—or six months. Sometimes, it’s three years. Sometimes, the successor is pretty obvious. Other times, it’s not. You have to use a little guesswork.”

Many investors might wonder where the information about a CEO’s age is available and the truth is the information is relatively easy to find. It is in SEC filings and on websites like Yahoo which shows the data under the company profile, as shown below. 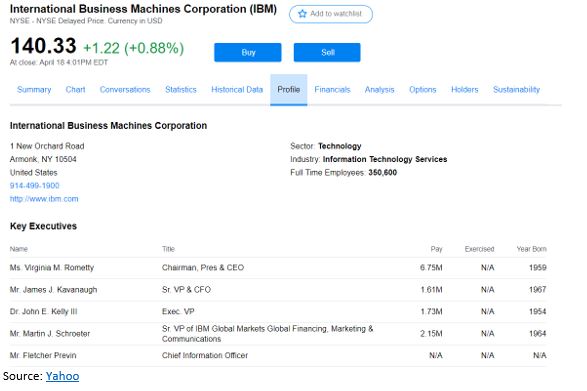 The fact they hired a CEO from outside the company is significant to Bilson who said, “…by and large, if you make a commitment, bring a new guy to a new city and set him up with a new [pay] package, that company is not going to be sold for X amount of years. So, in a sale situation, I’d much rather an internal promotion.”

This could make a deal difficult but not impossible. Other companies he likes include those involved in potential “M&A in the [Texas] Permian Basin. Finally, after so much talk about M&A last March or April, Concho Resources bought somebody.

Energen was then sold to Diamondback Energy, and now you’ve got QEP Resources (NYSE: QEP) up for sale. Probably, some other businesses in that region will go, as well.”

QEP is a cheap stock whose CEO is about 61 years old. This could be an ideal buy in the sector.