Here’s Why Analysts Are Watching for the Next Sears

The story of Sears is one of change. At first, Sears led the change. But, in the end Sears was unable to meet the demands of the changing retail environment. When thinking of Sears right now, the stock’s chart might summarize the image for many consumers and investors.

A History of Innovation

Sears had adapted and led the retail environment for many years after it was founded in 1886 by Richard W. Sears as the R.W. Sears Watch Company. Encyclopedia Britannica explains the company was founded:

“to sell watches by mail order. He relocated his business to Chicago in 1887, hired Alvah C. Roebuck to repair watches, and established a mail-order business for watches and jewelry. The company’s first catalog was offered the same year.

The company grew phenomenally by selling a range of merchandise at low prices to farms and villages that had no other convenient access to retail outlets.

The initiation of rural free delivery (1896) and of parcel post (1913) by the U.S. Postal Service enabled Sears to send its merchandise to even the most isolated customers. Rosenwald succeeded Sears as president of the company in 1909.

Between 1920 and 1943 Sears owned Encyclopedia Britannica, which it sold through the catalog. In 1924 General Robert E. Wood joined the company and became its guiding genius for the next 30 years.

Wood noted that the automobile was making retail outlets in urban centers more accessible to consumers in outlying suburbs and rural areas. To exploit this opportunity, he opened the first Sears retail store (in Chicago) in 1925, and the number of stores increased so rapidly that by 1931 retail sales had topped mail-order sales.

The company flourished in the economic boom after World War II and was not seriously challenged as America’s largest retailer until the 1980s, when the Kmart Corporation surpassed it in total sales. Wal-Mart eventually surpassed both and became, before the end of the 20th century, the largest retailer in the world.”

Sears’ innovations can be seen in the ad below which noted the ability to buy now and pay later in addition to obtaining service on a range of products. 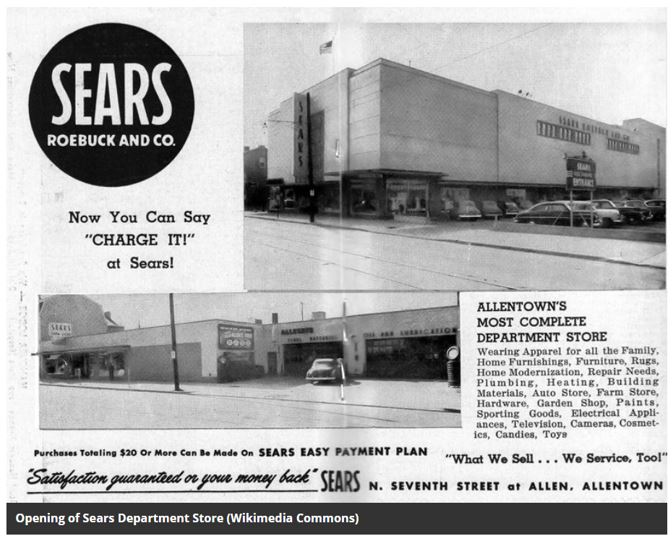 The company also owned the Allstate Corporation, an insurance company founded by Sears in 1931; Dean Witter, a financial services firm; Coldwell Banker real estate; and the Discover credit card which it introduced in 1985.

Sears also saw the importance of the internet and started Prodigy as a joint venture with IBM in 1984.  Prodigy was an online service that offered its subscribers access to a broad range of networked services, including news, weather, shopping, bulletin boards, games, polls, banking, stocks, travel, and a variety of other features.

For its initial roll-out, Prodigy supported 1,200 bit/s modems. To provide faster service and to stabilize the diverse modem market, Prodigy offered low-cost 2,400 bit/s internal modems to subscribers at a discount. These were fast for the time.

The company claimed it was the first consumer online service, citing its graphical user interface and basic architecture as differentiation from CompuServe, which started in 1979 and used a command-line interface. By 1990 it was the second-largest online service provider, with 465,000 subscribers trailing only CompuServe’s 600,000.

Eventually Sears stores suffered. It wasn’t because the company ignored the internet. In fact its online sales were at one point significant. And, as late as 2007, Sears was larger than Amazon when measured by market cap as the chart below shows.

Amazon has destroyed a number of competitors as it rose to prominence. Now, analysts are looking for the next Sears and one analyst recently noted that Kroger (NYSE: KR) could be the next Sears, according to MarketWatch:

On the earnings call, McMullen talked up Kroger’s digital advancements. The grocer reported third-quarter digital sales growth of more than 60%.

“We’re moving from a traditional grocer to a growth company with both a strong customer ecosystem that offers anything, anytime, anywhere, and asset-light, high-margin alternative partnerships and services,” he said, according to a FactSet transcript.

Saunders worries that Kroger will focus too much on digital at the expense of stores, many of which he says “feel run down and dispiriting” and don’t highlight what Kroger has to offer.

“This mantra was also one peddled by Eddie Lampert, who used it to justify the deterioration in stores,” Saunders wrote. “This did not work well for Sears and ultimately, we do not believe it will work out well for Kroger unless the company comes up with a more balanced growth strategy.”

To be sure, Saunders isn’t against Kroger’s tech investments; he calls the Ocado partnership “appropriate and necessary.” But online grocery has yet to take off.

Of course, Kroger could fare better than Sears. The long term stock chart of KR shows room for optimism.

The stock has pulled back significantly from its 2015 highs as investors, and the company’s management, noticed the changes in the retail environment. Online shopping for grocers, as analysts note, hasn’t really taken off yet.

That means traditional retailers like KR still have ample opportunities in their core businesses as they attempt to grow the new markets. KR is innovating, offering curbside deliver, home delivery and other conveniences.

Analysts expect slow growth in the company with earnings per share growth averaging about 5% a year. With a price to earnings (P/E) ratio in the single digits, it could be possible that slow earnings growth is priced into the stock. Now could be a time for value investors to consider KR, despite the worried headlines about how the company could be the next Sears.