Here’s What You Need to Know About the Next IPO

Lyft (Nasdaq: LYFT) has already started trading and Uber is capturing headlines. These are companies that were unicorns and are now transitioning to publicly traded companies after concluding initial public offerings (IPO).

A unicorn is a privately held startup company valued at over $1 billion. The term was coined in 2013 by venture capitalist Aileen Lee, choosing the mythical animal to represent the statistical rarity of such successful ventures.

A decacorn is a word used for those companies over $10 billion, while hectocorn is the appropriate term for such a company valued over $100 billion. Unicorns include Uber, Airbnb, Stripe, Palantir Technologies, and Pinterest.

Lyft wan a decacorn that turned into a public company on March 29, 2019.

Uber is preparing to go public and capturing a great deal of attention. Another company to watch is Pinterest, the operator of a popular bulletin-board website.

Pinterest is a social media website that allows users to organize and share images and videos from around the Web. Images uploaded by users are called Pins and may be organized into pinboards, which may be customized, themed and followed by other users.

Pinterest differs from many other social media platforms in that it is image-based, allowing a following to develop among those with interests that have a strong visual component. This is why Pinterest is popular for recipe sharing, interior design, fashion and online shopping.

Pinterest encourages its users to credit the sources for their images and provide a link back to them. Pinterest is mostly based around image sharing, but videos also may be shared.

According to Barron’s, “It has an attractive high-growth business, is close to profitability, and—most important—appears willing to price the deal to sell.

The talk on Wall Street late last week was that demand was strong for this week’s IPO, which would raise $1.2 billion or more, and that the pricing could be above the current range of $15 to $17 a share.

That’s below a price of more than $21 a share that Pinterest received in a round of financing from Fidelity Investments in 2017. At the midpoint of the range, Pinterest, which will list under the ticker PINS, would be valued at about $10.5 billion, based on a fully diluted share count of about 655 million shares.

Pinterest is growing rapidly off a low base, with revenue up 60% last year, to $756 million and rising a projected 45% to about $1.1 billion this year. 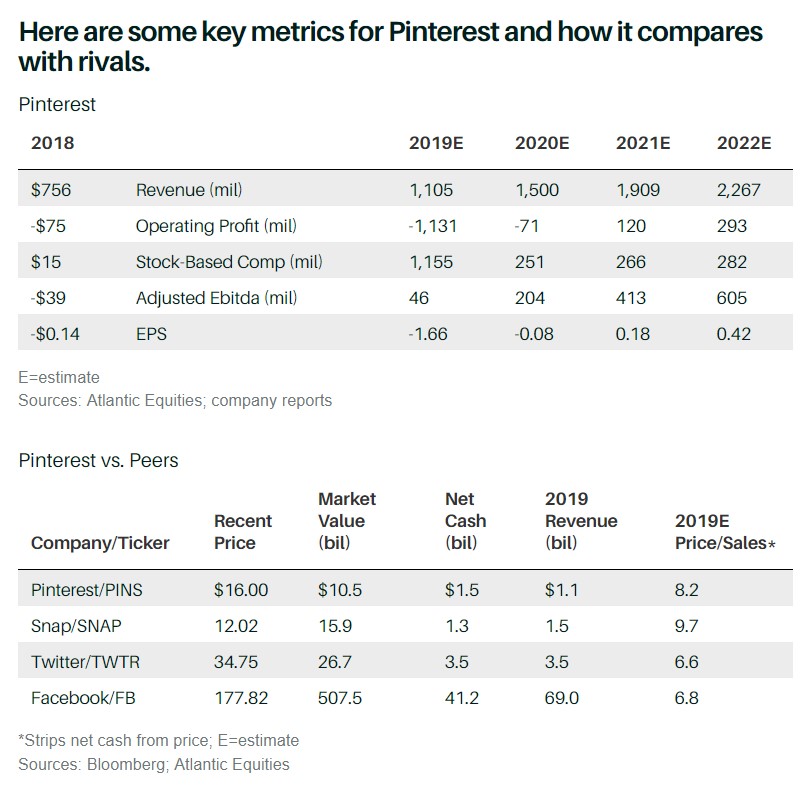 Pinterest had more than 265 million global users at the end of 2018, including 82 million in the U.S., who compile visual bulletin boards using pinned images on such topics as home renovations, wedding planning, fashion, and cooking.

Women make up two-thirds of Pinterest’s user base, including 80% of U.S. mothers ages 18 to 64—an attractive demographic given the role that women play in household financial decisions. Pinterest writes in its prospectus that half of all U.S. millennials are users.

The company appeals to advertisers, which buy so-called promoted pins that are comparable to sponsored posts on Facebook, because users are often planning to make purchases. Pinterest calls itself “the productivity tool for planning your dreams.”

Atlantic Equities analyst James Cordwell began coverage of Pinterest with an Overweight rating and a price target of $23 a share, writing that “the company’s unique and broadly appealing proposition, offering consumers the ability to view and collate visual recommendations, will enable ongoing robust user growth.”

He expects “significant monetization upside, given the higher purchasing intent of the user base” and sees 32% compound annual growth in revenues from 2018 through 2022. One of Pinterest’s biggest opportunities—and challenges—is outside the U.S., where it generates just 8% of its revenue.

“Twitter gets almost half of its revenues outside the U.S.,” Cordwell tells Barron’s. “There is no structural reason that Pinterest can’t be as successful as Twitter.”

However, that could be a warning to investors. As the next chart shows, that stock is trading below its initial trading price.

Barron’s continued, “Unlike Lyft, Pinterest is close to profitability on an annual basis and operated in the black in the fourth quarter. The company lost $75 million from operations in 2018 against $911 million for Lyft. Cordwell sees non-GAAP profitability in 2019 when excluding stock-based compensation.

Pinterest, like many tech companies, is a generous issuer of restricted stock to employees, compensation that tech investors are often willing to ignore. Cordwell sees GAAP profitability in 2021.

Pinterest will probably be valued based on its revenue. Assuming an IPO price of $16, the company would be valued at eight times projected 2019 sales of $1.1 billion when factoring in its $1.5 billion in cash. Snap is valued at nine times, and Twitter and Facebook, at about seven.

But, again, that could be a warning to investors as that stock is also well below its initial trading price.

It discloses that 57% of its monthly active users go to the site each week. Analysts estimate that the ratio of daily to monthly users at Pinterest is 20% to 25%, below Twitter at about 40% and Facebook, at 65%.

Cordwell agrees that this is an issue, but it’s offset by the “high purchasing intent” of Pinterest users.

Yet investors will have no power at the company because Pinterest will issue Class A shares in the deal, while converting all shares outstanding held by earlier-stage investors, including the company’s founders, Ben Silbermann and Evan Sharp, into Class B stock with 20 votes each.