There are a lot of negatives associated with social media and the online giants. Much of it is unintended. Facebook, for example, once connected friends, helping acquaintances from high school, for example, reunite.

Google became the source of information for many individuals. Google’s placement of news stories could make or break a news site. The same is true for Facebook. And, Twitter can help a story get distribution and become more popular than was possible years ago.

But, the companies came under attack for their reach in recent months. Question arose about the impact the companies had on the 2016 Presidential election and in more recent weeks, their role in distributing information on Brexit have come under scrutiny.

In response, the major internet companies are setting policies to limit misinformation. But, once again, unintended consequences are arising from policy decisions. 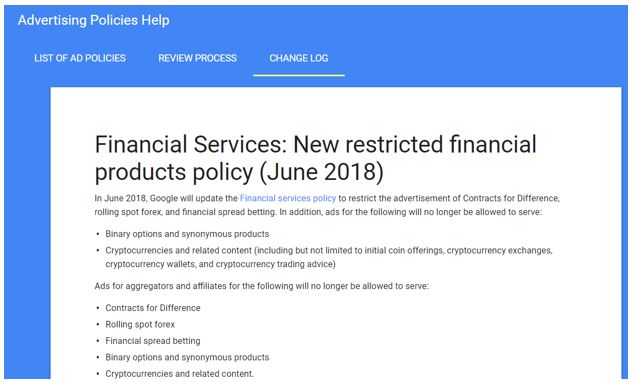 Recent decisions related to cryptocurrency ads are being questioned. According to CoinTelegraph.com, “Businesses and investors alike went on record this week to pan Google for its cryptocurrency advertisement ban which began June 1″, The Independent reports Monday, June 4.

As a correction gets underway, Google has come under fire in increasingly explicit terms for its decision to block cryptocurrency ad content while it pursues blockchain technology.

“I understand that Facebook and Google are under a lot of pressure to regulate what their users are reading, but they are still advertising gambling websites and other unethical practices,” Phillip Nunn, CEO of UK investment firm Blackmore Group with £70 mln under management, said to The Independent Monday.

Both Facebook and Twitter have moved to implement similar bans this year, despite the latter’s CEO forecasting that Bitcoin would become a “single world currency” as soon as 2028.

Suspecting a targeted move, Nunn suggested that like Facebook, Google was moving to prepare the way for its own, centralized virtual asset.

“I suspect the ban has been implemented to fit in with potential plans to introduce their own cryptocurrency to the market in the near future and therefore removing other crypto adverts allows them to do it on their own terms,” he added.

Meanwhile, UK disruptor bank Revolut, which in April completed a $250 mln funding round to achieve a $1.7 bln valuation, warned the policy failed to distinguish legitimate companies from bad actors.

“Unfortunately, the fact that this ban is a blanket ban will mean that legitimate cryptocurrency businesses which provide valuable services to users will be unfairly caught in the crossfire,” head of mobile at digital banking Ed Cooper commented.”

There could be repercussions for the markets. Price activity could rise and fall based on the policies of the internet gatekeepers. Although there are certainly other reasons, the price of bitcoin is in a down trend and the Google policy could be one factor.

Because of its sweeping nature and possible impacts on the markets, this policy has been questioned. And, Techcrunch notes it could be changed. The web site noted it could be a business decision, beginning with a degree of skepticism:

“As there’s clearly too much ad revenue potential to ignore, Facebook today announced it is reversing its cryptocurrency ad ban effective immediately. The decision comes with a few caveats, however. The company says it will allow ads and related content from “pre-approved advisers,” but will still not allow ads promoting binary options and initial coin offerings.”

The story reviewed the rationale for the ban:

“Facebook had first enacted the ban in January, saying at the time that too many companies in this space were “not currently operating in good faith.”

While it admitted that banning all crypto advertising was a broad change, the company said that its new policy would “improve the integrity and security of our ads, and to make it harder for scammers to profit from a presence on Facebook.”

But it had also said the policy would be revisited over time, as its ability to protect deceptive ads improved.”

There will be some safeguards in an effort to protect consumers.

“This time around, it’s making advertisers go through an application process to determine their eligibility.

Facebook will ask advertisers to include on their applications details like what licenses they’ve obtained, whether they’re a publicly traded company, and other relevant background information regarding their business.

How thoroughly this information is fact-checked by Facebook staff remains unclear.”

Of course, there will be some scams in any market. The Securities and Exchange Commission (SEC) still shuts down Ponzi schemes and prosecutes securities fraud with some regularity.

Techcrunch notes, “The crypto industry is rife with scams, so it makes sense that these major platforms would need some rules around what’s allowed. According to the FTC, consumers lost $532 million to cryptocurrency-related scams in the first two months of 2018, Coindesk reported on Monday. And an agency official warned that consumers will lose more than $3 billion by the end of the year.”

But, banning information, even in the form of ads, may not be the most effective way to deter fraud. Information could be the consumer’s most powerful weapon and if an investor decides to trade crypto, they should get as much information as possible.