Following the Money In the Bitcoin Market 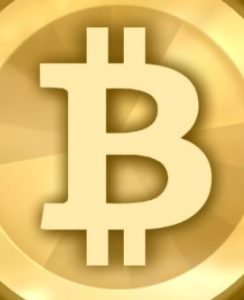 Some investors believe it can be useful to follow the “big money” or the “smart money.” To understand the rationale for this, let’s consider the different ways to classify investors in the futures markets.

For futures markets, the Commodity Futures Trading Commission (CFTC) collects and publishes detailed data on what different traders are doing. The CFTC is the regulator of futures markets, serving a role that is similar to the Securities and Exchange Commission (SEC) in the stock markets.

Every week, the CFTC releases a report called the Commitment of Traders (COT) which provides insight into the market action. Large traders are required to report their positions every week and this allows the CFTC to classify traders into one of three groups. An example of the raw data is shown below.

Large speculators are traders holding several thousand contracts in an individual market. These traders include hedge funds and large institutions. Commercial traders are those that use the futures markets to hedge their commercial activities. In grain markets, farmers would be an example of commercials. All other traders are considered to be small speculators.

The COT report identifies the positions of each group. Analysts have developed techniques to analyze this data with some general assumptions.

Large speculators tend to be trend followers. They will generally be wrong at major turning points, but they will be on the right side of major trends. For many analysts, this group can be ignored because the opinions of the smart money commercials and dumb money small speculators offers insight.

Why the Smart Money Is Smart

Some traders will argue that hedge funds, one of the groups included in the large speculator category, is not really smart money. Their arguments may be based on the performance of several hedge funds or by indexes tracking the funds that show that hedge funds often lag their benchmarks.

This is true, but irrelevant. There are many hedge funds, and many are small. The smaller funds may or not be successful. If they are successful, they are likely to become large funds. If not, they will either remain small or go out of business.

The smart money is the big money and it becomes big by being smart.

It’s only the large funds that are included in the large speculator category. Small funds will rarely hold enough contracts to report. Now, these funds are often short term traders but the chart below highlights how useful their buying and selling can be.

The black line is the COT data for large speculators. The line closely tracks the price action with the large specs tending to be buying near bottoms and reducing positions near tops. This is a chart of crude oil futures, but other markets show similar patterns.

Recent reports, including reports from mainstream media sources like CNN, indicate that institutional investors that have already invested in crypto assets and are long-term bullish on the industry believe that the Bitcoin price has already bottomed and is likely to end the year at higher prices.

That’s according to an informal survey conducted by Wall Street strategist Fundstrat Global Advisors, a firm that is becoming known as one of the best sources of research on cryptocurrencies in the market. 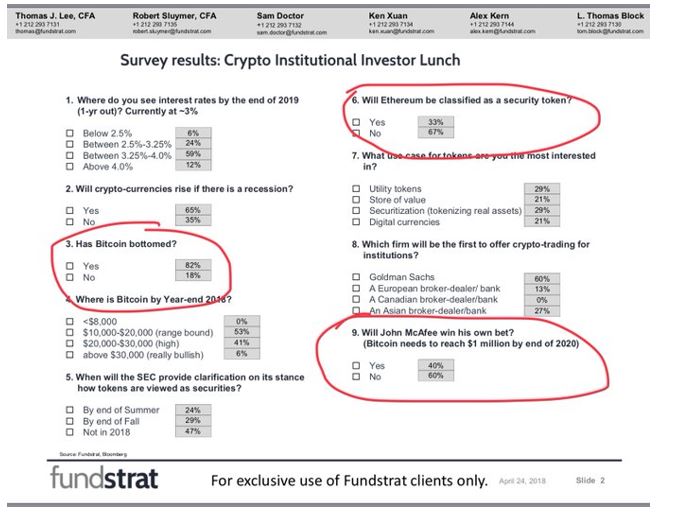 Institutional investors generally control large amounts of capital and collectively, they do have an impact on prices. If they are buying, they tend to push prices up.

The Fundstrat reported that a majority of those surveyed (53%) expect the price of bitcoin to be between $10,000 and $20,000 at the end of the end of the year. Most of the remaining participants expect even higher prices.

Fundstrat founder Tom Lee, now recognized personally as one of the most knowledgeable crypto analysts, is among the bulls. His year end target is $25,000 and gains will continue for some time. “We are not staking anything on that, but I think $1mm is possible,” Lee said on Twitter, adding that it’s “not our base case, but certainly possible.”

The Tale of the Chart

If bitcoin has, in fact, formed a bottom, we should see signs of that in the chart. As seen below, there are signs of strength in the market.

At the bottom of the chart is the stochastics indicator. This indicator is one of many that measures momentum. While stochastics is shown in the chart, the many momentum indicators tend to signal at about the same time. Other popular indicators, like MACD and RSI, show similar patterns.

This is a weekly chart. The selloff pushed the stochastics into an oversold extreme, meaning the price decline was steep and quick. Some traders consider oversold to mean the decline was “too steep and too fast.”

After the indicator becomes oversold, traders are on the lookout for a buy signal. In the chart above, the stochastics crossover, a widely recognized buy signal, occurred and the indicator moved out of the oversold zone.

From a timing perspective, this represents an ideal time to buy. The chart shows that price action is moving up but bitcoin is volatile and a rapid reversal to the down side is always possible.

This could be an ideal time to begin accumulating a position. A trader could buy one part of their position now and use additional weakness to add to their position. If bitcoin rallies, they could buy as the price rises.

Overall, the chart agrees with the smart money that bitcoin is most likely headed higher.