Finding Winning Stocks With the Most Potential

A recent article at AAII.com prepared a study on this question. “The companies chosen for the study were based on companies in “The Greatest Stock Market Winners: 1970-1983,” published by William O’Neil & Co.

To be considered a great winner, a company typically had to at least double in value within a calendar year, although there were a few exceptions to this guideline, and not all companies that doubled in value were selected.

Historical fundamental and technical information on these firms was taken from the Datagraph books (also published by William O’Neil & Co. and sold primarily to institutional investors).

The results of this study are summarized in the table below. 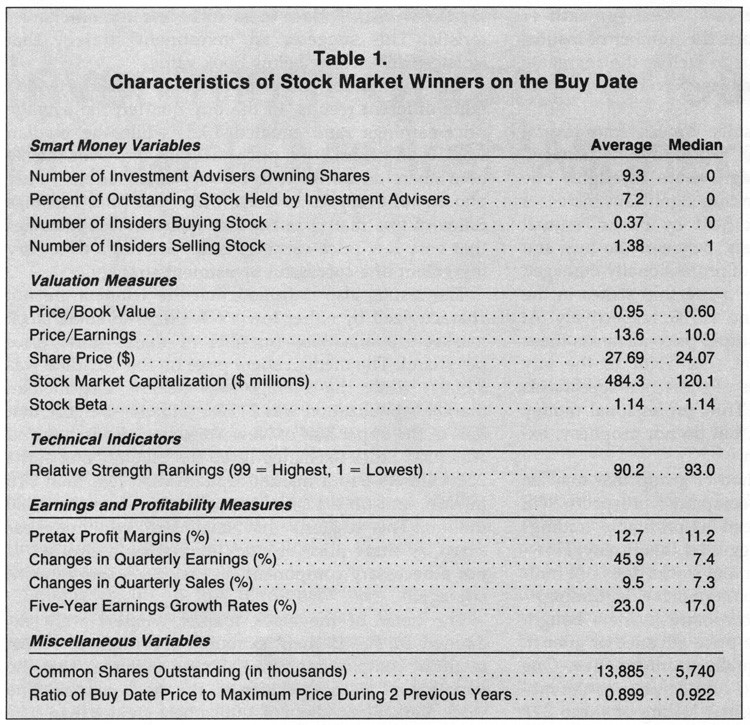 The first group of indicators, the smart money variables, do not seem to be useful in predicting major stock market moves.

Next, the study looked at five different valuation variables.

Among the 222 winners, 164 were selling for less than book value in the quarter in which the buy occurred.

The median price-to-book-value ratio was 0.60, while the average ratio was 0.95. (The median is the exact midpoint, where half of all ratios fall above and half fall below; it is used because it is less influenced by extreme values.)

While a price-to-book-value ratio of less than 1.00 may not be a perfect indicator of a stock market winner, it does seem to be a common characteristic. This suggests an investment strategy that isolates firms selling below book value.

The results also indicated that the winners are not characterized by either low stock prices or small stock market capitalizations (number of shares times price per share).

This suggests that small size, whether measured by share price or stock market capitalization, is not a necessary component of a successful investment strategy.

The betas of the stock market winners were examined to see if their extraordinary rates of return might be compensation for riskiness. While the firms as a group were slightly riskier than the market as a whole, the additional stock market risk cannot account for the extraordinary returns of these winners.

The technical indicator measured among the stock winners was relative strength.

The relative strength of a stock is the average of quarterly price changes during the previous year, but giving more weight (40%) to the most recent quarter and less weight (20% each) to the three other quarters; these average changes are then ranked among all stocks, ranging from 1 (lowest) to 99 (highest).

Among the winners, the median rank in the buy quarter was 93; fully 212 of the 222 firms possessed relative strength rankings of greater than 70.

In addition, the relative strength rankings for 170 of the 222 winners increased between the quarter prior to the buy and the quarter during which the stock was purchased.

These findings show that investors should seek out firms with high relative strength rankings; and second, investors should try to identify firms that exhibit a positive change in their ranking from the prior quarter.

Several measures of earnings and profitability among the stock market winners were examined.

This evidence clearly indicates that a high, positive pretax profit margin should be one of the selection screens in an investment strategy.

On average, quarterly earnings in the buy quarter rose nearly 45.9% from the previous quarter; these were not seasonally adjusted, and they represent changes in the raw accounting earnings.

Another investment rule suggested by the winners is to seek out firms with a positive change in quarterly earnings—earnings acceleration.

It’s also useful to look for stocks near new highs in price.

An investment strategy that selects stocks selling within 15% of their two-year highs would capture a common characteristic of these winners.

These characteristics could help traders find the next big winners in the stock market.