According to USA Today, The majority of Americans are not setting aside enough money in emergency savings to cover a significant unexpected expense, according to a new survey from CIT Bank.

That’s a problem, because nearly half of American households were faced with emergency expenses in the past year.

“More than one in four U.S. consumers do not save for unexpected events such as a home repair or health expense,” said Ravi Kumar, head of Internet Banking for CIT Bank in a press release. 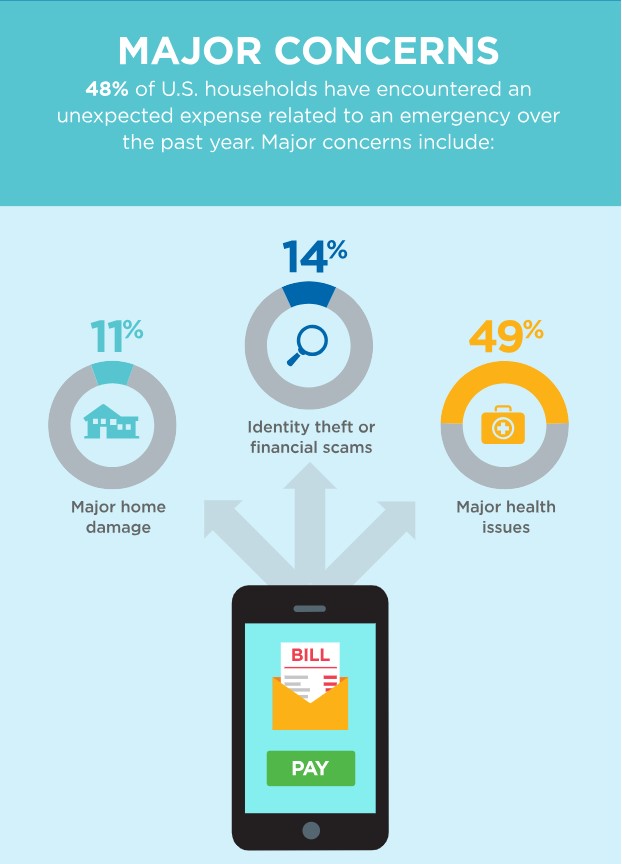 “Another quarter of consumers report saving less than 5 percent of their monthly household income for emergencies.”

Experts generally recommended that your emergency fund be large enough to cover three to six months of your household expenses, but those numbers aren’t set in stone.

If you have a job where your income is not stable, for example, or a health insurance plan with a high deductible, it might make sense to have an even larger cushion.

But as numerous other studies have confirmed, the failure to save steadily has left a large majority of Americans far shy of those targets.

Earlier this year, just 39 percent of respondents to a Bankrate.com survey said they had savings sufficient to cover a $1,000 surprise expense. And that leaves people in a tough position when trouble arises.

“Family and credit cards top the list of resources Americans rely on for financial support instead of utilizing a savings account for emergencies,” Kumar said.

Many families turn to credit cards when faced with emergency expenses. Others will use pay day loans which the Consumer Financial Protection Bureau notes,

“While there is no set definition of a payday loan, it is usually a short-term, high cost loan, generally for $500 or less, that is typically due on your next payday. Depending on your state law, payday loans may be available through storefront payday lenders or online.”

Those may not be the most appealing options so some consumers turn to other options, like their retirement accounts.

CBS News reports, “About half of 401(k) plans allow participants to borrow against their account, and about 25 percent of participants have an outstanding loan. Those who do borrow from their account see it as a good way to get to their money in a hurry.

But workers who take loans from their 401(k) save less (6.7 percent) than participants with no loans (8.3 percent). Workers who don’t take loans are projected to save up to $749,000 by retirement age, whereas those with loans are on track to save about $100,000 less.

Loans are also a disaster for those who suddenly lose their job. If you can’t pay off the loan immediately, the unpaid balance will be included in income as a taxable distribution, which can wipe out your retirement savings in the plan.” 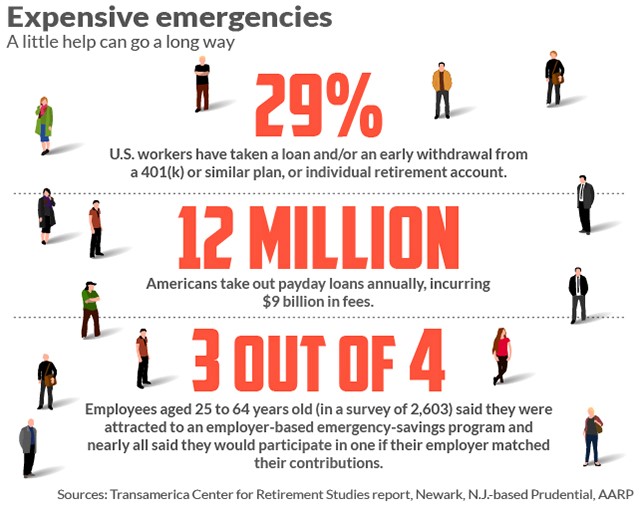 A New Solution Could Be Possible

According to MarketWatch.com, a new solution may soon be available.

“A growing number of employers, benefit-plan sponsors, policy analysts and members of Congress are taking steps to correct the long-standing problem. The goal is creating a new type of emergency-savings plan for workers that is offered through employers.

“Interest has expanded almost exponentially,” said David John, a senior strategic policy adviser at the Washington, D.C.-based AARP Public Policy Institute who is part of the Brookings Institution Retirement Security Project. “Financial stress affects employees’ focus and productivity. One of the easiest ways to get the best out of your workforce is to help them have some peace of mind.”

“So many people don’t have the capacity to address a financial emergency, so their 401(k) is the only pot of money they can tap into,” said Rachel Weker, vice president of T. Rowe Price Group’s retirement division in Baltimore.

Americans are embracing the idea of workplace-sponsored emergency-savings plans, based on focus groups and a study AARP conducted. In a survey of 2,603 employees aged 25 to 64, three out of four said they were attracted to an employer-based emergency-savings program, and nearly all said they would participate in one if their employer matched their contributions.”

But exactly how employers can offer rainy-day savings is murky and presents a number of obstacles — legal, administrative and behavioral. Nevertheless, a few pioneering employers and financial-services firms are testing out alternatives.

“Employers are still trying to sort out ways to do it, figuring out what are the pluses and minuses, the legal issues and the costs,” said Brigitte Madrian, the Aetna professor of public policy and corporate management at the John F. Kennedy School of Government at Harvard University in Cambridge, Mass.

There are two main types of emergency-savings plans offered through employers: so-called sidecar or rainy-day accounts, which are adjuncts to retirement-savings plans such as 401(k)s; and do-it-yourself arrangements that employees set up with subsidies from employers.

Prudential Financial (NYSE: PRU) and Prosperity Now, a research and public-policy nonprofit, teamed up recently to help employers set up sidecar accounts, alongside the firms’ 401(k) retirement-savings plans. This could provide an investment opportunity for long term investors.

In a sidecar account, an employee uses after-tax money (as opposed to the pretax money allocated to a retirement plan). Once the cash builds up to a predetermined level, future payroll deductions go into the retirement account.

If the emergency-savings account drops below its intended target, money from the employee’s retirement fund is transferred in.

“Companies are understandably risk-averse when it comes to complying with ERISA,” said David Mitchell, associate director for policy and market solutions with the Aspen Institute Financial Security Program in Washington, D.C.

The bill would also see the Treasury Department create a pilot program that offers incentives to employers to set up short-term savings accounts. Companies could put $400 into each employee’s account.

The legislation appears unlikely to pass in 2018 because time is running out. But, these funds could soon be available, and PRU could gain billions in revenue as the accounts become available.