Experts Tell Barron’s to Expect a Rally Next Year

It’s as much an annual tradition on Wall Street as the mistletoe in many homes on Main Street. Every year, Barron’s consults a group of Wall Street analysts to obtain their forecast for the next year. This year, all of the analysts are bullish in that none expect a down year.

To Summarize the Outlook:

“…as U.S. stocks stumble toward what could be their first yearly loss since 2015, next year is looking rather sunny. So say the 10 market strategists Barron’s consulted this month, all of whom have 2019 targets for the S&P 500 index that are higher than the benchmark’s recent price level of 2600.

The strategists, who mostly hail from investment banks and asset-management firms, offered up individual S&P targets ranging from 2750 to 3100.”

So, should we buy based on these forecasts? Let’s dig a little deeper before logging in to our brokerage accounts.

As a short term trader, we might buy when prices cross above a moving average (MA) and sell when they fall below that MA. This strategy is based on the idea that we expect the trend to continue.

If we use momentum indicators like RSI as a short term trader, we might sell when the indicator rises to a high level. In that case we are expecting the trend to reverse.

Forecasting almost always relies on one of those two basic concepts. That might explain why analysts expected prices for the S&P 500 to increase this year. Barron’s notes “…they expected the S&P 500 to rise 7% this year.”

For 2018, analysts largely expected a repeat of 2017 and did not “anticipate renewed volatility or any correction in the index, defined as a drop of 10% from the high. Overall, they predicted that financial stocks would do well in 2018 and that utilities would underperform, but the opposite has happened.”

The chart below summaries the performance of individual sectors and shows utilities outperformed while financials were among the worst performers. 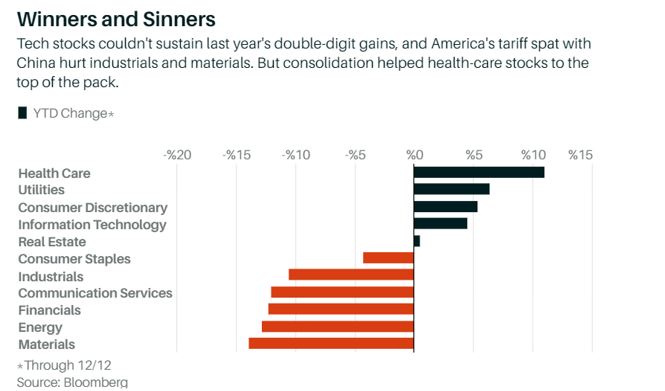 Given their track records, it might seem that we don’t need to be concerned with analyst forecasts but that would be a mistake. Analyst forecasts summarize the consensus thinking on Wall Street in some ways and it is valuable to understand the expectations of investors.

Several analysts expect the S&P 500 to reach 3,100 next year. Among the bulls is Dubravko Lakos-Bujas, the chief U.S. equity strategist at J.P. Morgan. He notes,

Talk of a trade war “was becoming increasingly risky for the Trump administration,” he says, noting the market’s negative response to rising trade friction.

If the economic cycle remains intact, Lakos-Bujas thinks that stocks will be rerated higher. He estimates that S&P 500 companies will earn $178 next year. Applying a multiple of 17.4 gets him to a target price of 3100.”

His specific forecasts are shown below.

The current yield on Treasuries is about 2.8% so this represents a significant increase in interest rates. The Federal Reserve changed their forecast for 2019 and now expects just two rate hikes instead of three so this could be an indication that data is changing rapidly as forecasts are being prepared.

On the other end of the spectrum is Mike Wilson, chief U.S. equity strategist at Morgan Stanley, who is “less sanguine about the market’s prospects and the economy.

Sharps, whose 2019 target is 2850, describes a “middling environment with meaningful challenges” for stocks, as U.S. growth moderates. Sustainable economic gains above recent levels depend on productivity improvements, he says.

Governments around the world have a lot of debt, and demographics in Europe and China could pose difficulties for growth, he adds.

Wilson’s base-case S&P 500 target of 2750 is the strategist group’s lowest. He forecasts just 3% to 4% growth in corporate earnings for 2019, with an “elevated risk of an outright earnings recession”—two quarters of negative comparisons for S&P 500 profits.

He notes that more than half of this year’s profit gain owes to tax cuts and stock buybacks, which reduce share count and boost earnings per share.

The economy might undergo a modest cyclical correction in 2019, but “what if companies react and start firing people?” he asks. In other words, investors could be underestimating the potential severity of the economic deceleration.”

His specific forecasts are shown in the next chart.

“Utility stocks fetch 19 times expected earnings, although the sector offers much less growth than tech. Still, utilities are favored by several strategists, including Sharps of T. Rowe Price, and Wilson of Morgan Stanley.

Both like NextEra (NEE), which has a good rate base in Florida and a rapidly growing national renewable-energy business.

Consumer-discretionary stocks are least liked by our crowd. Consumers could pull back on spending, due to concerns over tariffs and the impact of a slower housing market, Nuveen’s Malik observes.

Within the sector, bricks-and-mortar-oriented retailers face an ongoing challenge, and will have to continue spending heavily to compete online.”

Now that we know the forecast there are ways to use this information. It will be important to maintain low expectations for next year. The earnings forecasts are likely to come down over time as they usually do and that could lead to lower prices.

Utility stocks could well be among the best performers in a volatile market. That could be important for investors to remember. While we don’t know the prices for the end of 2019 yet, we should expect a volatile year in the market as the Fed continues to drive the news cycle.