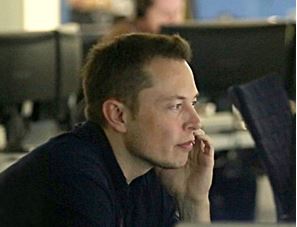 Tesla CEO Elon Musk is unhappy with short sellers. At least some of his actions seem to be aimed at individuals and fund managers who sold shares of Tesla Motors Inc. (Nasdaq: TSLA) short.

Investopedia noted, “short selling may be prompted by speculation, or by the desire to hedge the downside risk of a long position in the same security or a related one. Since the risk of loss on a short sale is theoretically infinite, short selling should only be used by experienced traders, who are familiar with the risks.”

Musk recently noted that his opinion of short sellers has changed over the years. 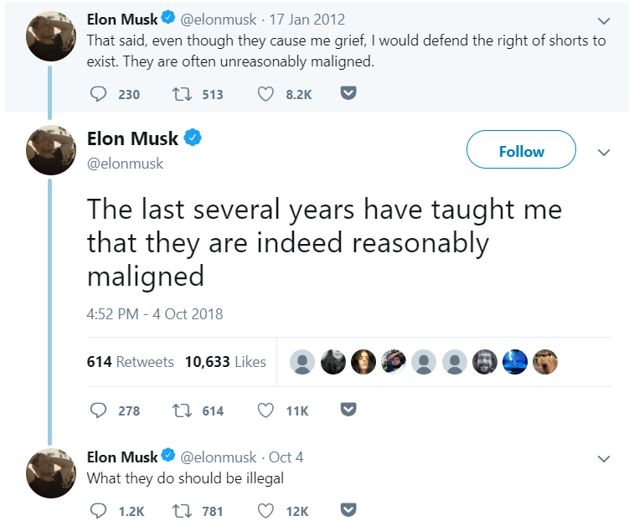 The Argument for Short Sellers

Short selling can be used to either generate a profit or to meet the needs of market makers seeking to fill orders from individual and professional investors in stocks.

“Short selling is really just a way of expressing a view that a particular stock is over-valued, and it appears now that the doubts many short sellers had about the companies they shorted were more than justified.

And it is important there is a powerful incentive for investors to find out what is wrong with individual companies. For example, it was shorters who were the first to work out that something was up with Enron.

Short sellers devote considerable time, effort and resources to establishing the reality behind corporate rhetoric. An enlightened supervisory regime, therefore, would observe their market signals and use them as a sort of early warning system.

Rather than being a source of trouble, the practice actually offers regulators a useful way of anticipating trouble.

Finally, it is the ability to short that creates the classic “hedge” that gave the industry its name. Being able to hedge helps to prevent investors suffering losses during downturns.

Investors in the hedge fund are increasingly institutions such as pension funds (institutional investment now forms a clear majority of all assets managed by the industry). It is surely a good thing that socially valuable investments can be protected in falling markets.”

Barron’s notes that “Musk has argued that short selling stops companies from going public and motivates shorts to attack “by whatever means possible.”” He seems to believe short sellers are one reason for the volatility in shares of TSLA.

Of course, there are other possible reasons for the volatility in the stock. One reason is simply Musk himself. His comments, especially his tweets, at times create volatility. One example was his announcement on Twitter that he was considering taking Tesla private.

In August, Musk tweeted, “Am considering taking Tesla private at $420. Funding secured” and pushed the stock from $357 to $380.  As it became apparent there was no funding, the stock price fell. And, eventually Musk admitted he had no way to complete the deal.

In September, the Securities and Exchange Commission (SEC) charged Musk with stock fraud, alleging that he knew the statement was false when he tweeted it.

Musk, Tesla, and the SEC were in court on Thursday seeking approval for a settlement in which he and his company agreed to pay $20 million each in civil penalties, to be distributed to investors Musk harmed. Without denying the charges, Musk also agreed to step down as chairman for three years.

It will be some time before we know what Tesla is worth, but shorts are helping drive the price of the stock to its fair value, especially given the fact that Tesla has issued convertible bonds.

Market makers often use a strategy known as convertible arbitrage to reduce risk in the convertible bond market.

Barclay’s explains, “…a hedge fund using convertible arbitrage will buy a company’s convertible bonds at the same time as it shorts the company’s stock.”

If the company’s stock price falls, the hedge fund will benefit from its short position; it is also likely that the company’s convertible bonds will decline less than its stock, because they are protected by their value as fixed-income instruments.

On the other hand, if the company’s stock price rises, the hedge fund can convert its convertible bonds into stock and sell that stock at market value, thereby benefiting from its long position, and ideally, compensating for any losses on its short position.

Convertible arbitrage is not without risks. First, it is trickier than it sounds.

Because one generally must hold convertible bonds for a specified amount of time before they can be converted into stock, it is important for the convertible arbitrageur to evaluate the market carefully and determine in advance if market conditions will coincide with the time frame in which conversion is permitted.

One example is the market crash of 1987, when many convertible bonds declined more than the stocks into which they were convertible, for various reasons which are not totally understood even today.

A more recent example occurred in 2005, when many arbitrageurs had long positions in General Motors (GM) convertible bonds and short positions in GM stock. They suffered losses when a billionaire investor tried to buy GM stock at the same time its debt was being downgraded by credit-ratings agencies.

So, the market might need traders to take short positions, even if Musk believes they hurt the company. In truth, there is probably nothing that short sellers do to Tesla except distract its CEO from focusing on making cars.