Bitcoin and other cryptocurrencies might be the most exciting market in the world right now. But, they aren’t for everyone. To find out if they’re right for you, be sure you understand the basics of the market. This is true for any market but it’s especially true for speculative markets.

And, cryptocurrencies are a speculative market. Before looking at the market, let’s define what a cryptocurrency, or crypto, is.

A defining feature of a cryptocurrency, and arguably its most endearing allure, is its organic nature; it is not issued by any central authority, rendering it theoretically immune to government interference or manipulation.

This is, in other words, a potential means of completing transactions in anonymity. That leads to potential concerns about illegal activities like using cryptos to buy illegal drugs, for example, or evade currency transfer laws.

This is possible, and it is also possible to complete illegal transactions with currencies backed by any government. This concern, however, could lead to regulation for cryptocurrencies and that could affect their value. Regulation could actually increase or decrease the value, depending on specifics.

That demonstrates where we are in this market. The absence of regulation means we are in the initial stages of the market. This could be the ideal time to take a position in the market to benefit from its increased acceptance.

But, there are always risks when investing in any market, especially one that is unregulated and still taking shape. That means caution is warranted but even with the risks, cryptos could be an acceptable investment for many investors.

That explains why some large investment firms, include Goldman Sachs, have taken an interest in the market.

Cryptocurrencies as an Asset Class

One way some investors think of cryptocurrencies is as a substitute for cash. Some of the currencies can be used for transactions. For example, it’s possible to use bitcoins to buy a Domino’s pizza.

In this way, cryptocurrencies are in line with what Warren Buffett believes money is. He realized currency is just a medium used to conduct business and is something that is agreed to have value. It could be paper as we use today, gold bars or even seashells.

Years ago, Buffett said, “Whether the currency a century from now is based on gold, seashells, shark teeth, or a piece of paper (as today), people will be willing to exchange a couple of minutes of their daily labor for a Coca-Cola…”

But, bitcoin is also considered to be an investment. It has been among the best performing markets in the world over the past year. 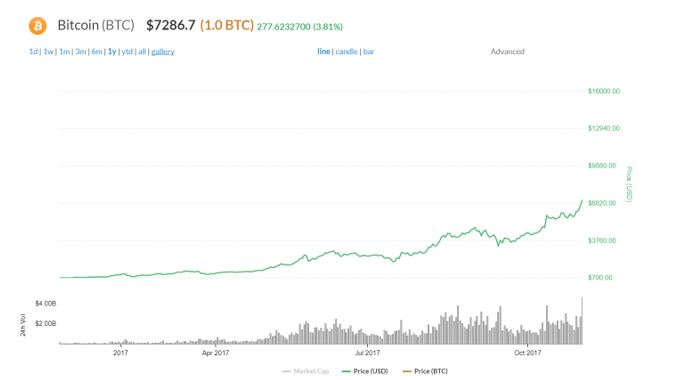 Over the past six months, Bitcoin has gained more than 300%. Yet it is far from the top performing cryptocurrency. There are more than 1,400 cryptos trading according to one count. Several have delivered gains of more than 400,000% in six months. 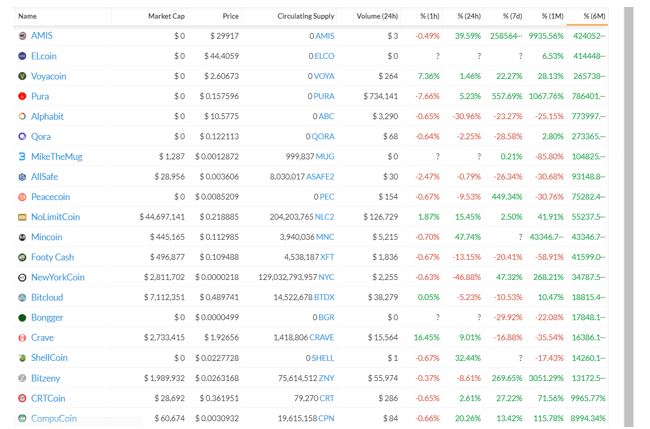 Separating Speculating From Investing in Cryptos

The table above shows many of the current cryptos have very small market capitalizations and are thinly traded. This is important for traders to remember. Some of the cryptos are unlikely to survive in the long run. Small market caps and low trading volume are one sign that the crypto may not last.

Of course, bitcoin started small. To consider whether or not a cryptocurrency is likely to survive, it is important to consider the purpose of the coin. Near the top of the list of biggest gainers is ELcoin. This crypto has been around since 2015 and its purpose is:

The ELcoin functionality is similar to Facebook, providing users control of pages, including advertising-generated revenue. The system provides for the implementation of social networks protected against outside access, securities markets independent of stock exchanges, agreements that don’t require legal intervention, and other uses. Users maintain control without the cost of overhead and in a secure environment.

Confused? According to some potential traders, there are concerns about the business model underlying the cryptocurrency.

Any cryptocurrency is likely to meet most of these requirements. Other than acceptability, all of the characteristics can be designed into the crypto. The difficult part is acceptability. This requires the most consideration.

Bitcoin is acceptable in a number of ways. Many cryptos are not. Among the least accepted cryptos is Dentacoin. This is described as “a way to improve dental health, cut out insurance companies as middle men, and foster cooperation between dentists and patients.”

Among the promises is one that the coin could be used to pay for dental services. But, there were recently just two dental practices in Europe that accepted the coins. If one of those two happens to be your dentist, this could be a great way to pay for services. If not, then the coin might not be worth much.

To avoid the problems like this, some experts recommend setting rules for investing. Among the most popular rules are:

Why Bother With Cryptos?

Despite the problems in this asset class, there is potential for profits. Older investors may recall the Internet bubble. It seemed that hundreds of companies began trading with a name that ended in “dot com” because that signified they did business on the Internet.

Many of those companies are gone. They destroyed billions of dollars of shareholder wealth. But, some survived. Amazon.com and Google began trading at that time and are now worth billions. Companies like Facebook and Netflix came later and delivered billions in wealth to their shareholders.

Now, we are in a repeat of that era in many ways. There are new cryptos arriving every day. Some will be winners, and some will be losers. In fact, it’s reasonable to assume that based on history the majority will be losers.

But, again based on history, it’s also reasonable to assume that in the long run, the wealth created by the relatively few winners will be worth more than the accumulated losses of the large number of losers.

The only way to participate in those gains is by trading cryptocurrencies. These should not be a large part of your portfolio. But, it is reasonable to allocate a small percentage of wealth to this asset class knowing that it could represent a larger percentage of wealth one day or could be a complete loss.

There’s unlikely to be a middle ground in cryptocurrencies. There will be big winners and 100% losses. But, all new financial innovations create billionaires. This one is likely to do the same.