Crypto Demonstrates Its Value in the Syrian Crisis

Many investors look at gold as a hedge against international turmoil. That thesis is likely to be put to the test, again. Tensions in Syria could roil markets, but, it’s actually much more than a potential military engagement in Syria.

Syria has become a battleground for foreign powers, similar to the proxy wars the world experienced during the Cold War. The United States and the Soviet Union faced off against each other in various ways at that time, often using foreign lands in their rivalry with Korea serving as a notable example.

The Soviet Union was not an official combatant in the Korean War that began in 1950. But, historians note, the Soviet Union played a significant, covert role in the conflict, providing material and medical services, as well as Soviet pilots and aircraft to aid the North Korean-Chinese forces.

Russia, the successor to the Soviet Union, is now engaged in Syria, providing support to the government of that beleaguered nation. Now, there are fears of escalation as Russian and U.S. officials engage in heated rhetoric. The chance of miscalculation is high. 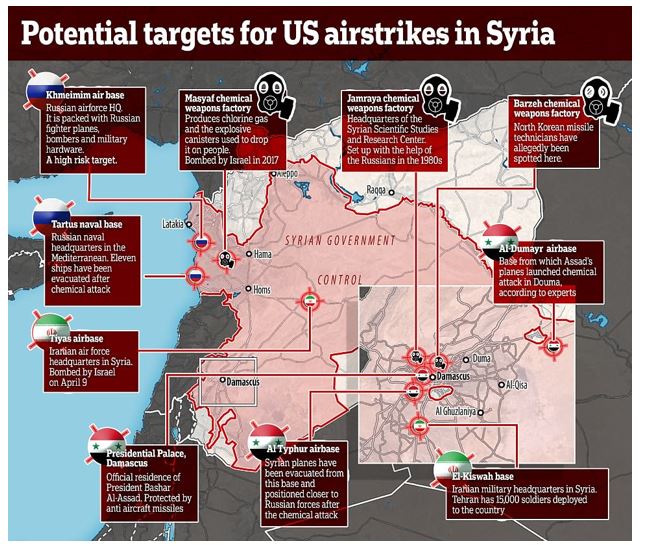 In this environment, traders have traditionally swarmed to gold. There has been increased volatility in gold, but the gains have been short lived.

However, bitcoin has fared better in this environment.

There are some important reasons to expect bitcoin and other cryptos to be the safe haven trade in the current crisis.

Sanctions Could Fuel Demand for Bitcoin

Earlier this month, the Trump administration imposed sanctions against more than three dozen Russian individuals and entities, targeting senior Russian government officials as well as some of President Vladimir Putin’s closest business allies and the companies they own.

The action is one of the administration’s toughest punitive measures against Russia to date. U.S. officials say it is a response to Russian aggressions, including meddling in U.S. elections, cyberattacks on critical U.S. infrastructure, the Kremlin’s military intervention in Ukraine, and supplying bombs and materiel to the regime of Syrian President Bashar al-Assad.

“What we would like to see is the totality of the Russian behavior change,” said White House press secretary Sarah Huckabee Sanders. “We want to continue having conversations and work forward to building a better relationship.”

The targets are some of the richest individuals in Russia, and there is a possibility these individuals could use cryptocurrencies to move wealth, in defiance of the sanctions.

There is a precedent for using crypto currencies to evade sanctions to some degree.

As Vox reported in another example of sanctions, “The problem is North Korea can partially skirt financial restrictions with cryptocurrencies, an online form of money, according to Priscilla Moriuchi, formerly a top National Security Agency official charged with overseeing cyber threats from East Asia.

Moriuchi, who is now at the digital intelligence firm Recorded Future, estimates that North Korea earns between $15 million and $200 million by creating and selling cryptocurrencies and then turning it into hard cash.

That’s not enough money to fully fund North Korea’s weapons programs, to be sure, but it ensures they don’t completely shut down.

So even though sanctions hurt North Korea’s physical economy, there are currently few ways America can curb Pyongyang’s growing digital economy. That means North Korea has an even greater ability to keep its nuclear program running than we might think.

“I would bet that these coins are being turned into something — currency or physical goods — that are supporting North Korea’s nuclear and ballistic missile program,” Moriuchi told Vox.”

The Impact Could Be Large

Sanctions are targeting Russian individuals with billions of dollars. Russian billionaires have long used foreign markets as part of their investment strategy, buying large and expensive homes in London and New York City, for example.

Because they have so much money to invest, it makes sense to think of them the way that Warren Buffett thinks about stocks. Buffett has written that he is only interested in large acquisitions, “The larger the company, the greater will be our interest: We would like to make an acquisition in the $5-20 billion range.”

The reason for that is fairly straightforward. Berkshire Hathaway Inc. (NYSE: BRK-A) is a $500 billion company. Even if Buffett found a wonderful company worth $1 million, it would not have a significant impact on Berkshire’s operations.

We can assume that the company grows its earnings by 50% a year for the next five years and at the end of that time, the company would be worth $7.6 million, assuming the company’s value grows at the same rate as the earnings.

This incredible investment would have a 0.0015% impact on Berkshire Hathaway’s value. This demonstrates that Buffett simply cannot look at extremely small deals since they have such a negligible impact on the company’s value.

The same would be true of Russian oligarchs using cryptos. There are thousands of potential investments but the small ones would not be suitable investments for billionaires. They would move the market price too much in trying to buy or sell a small crypto.

Understandably, they would need to focus on the lager cryptos. Using an arbitrary cutoff value of $5 billion market cap, the largest coins would be:

Now, these are volatile markets and there could certainly be more cryptos of that size. There could also be less currencies of that size as volatility both adds to and subtracts from the market capitalization of cryptos.

However, the lesson for small investors could be to follow in the footsteps of billionaires. Although we don’t know if there are billionaires involved in the crypto markets, we know that if they choose to access the markets, they will; be buying and selling the largest cryptos.

Smaller markets could offer excellent returns, but the safest returns are likely in the largest asset classes. Bitcoin can and has moved more than 10% in a day, but the liquidity makes it tradable in case an investor chooses to exit the market.

Billionaires, and small investors, should always plan exit strategies before they enter a market.