Could This Be the Time to Consider Bitcoin? 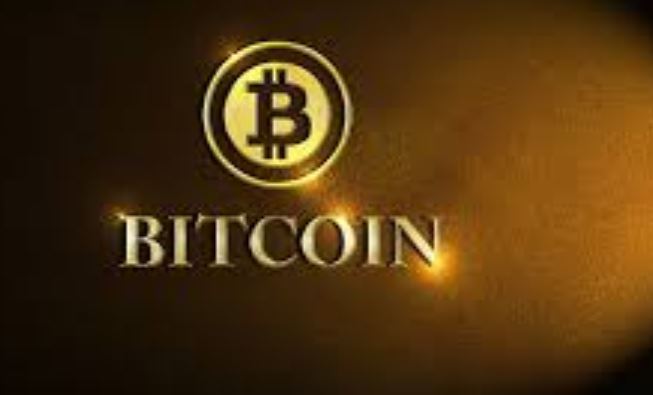 For the past few weeks, many traders have been focused on the stock market. They are concerned about the recent pull back which pushed the S&P 500 Index down by more than 10%. The question is whether or not that was the beginning of a bear market.

Traders have also been following the fixed income markets as the Federal Reserve raises interest rates and appears to be accelerating the pace of its hikes. This has led to some increased volatility in those markets at times and that contributes to concerns about stocks.

If that’s not enough, some traders have also been forced to pay attention to the oil market as sanctions on Iran and turmoil related to international pressure on Saudi Arabia captures headlines and pushes oil prices up and down.

But, one analyst recently told MarketWatch that he believes “an early Christmas present could be unfolding for owners of digital currencies.”

Cryptos Could Be Positioned to Rally

While forgotten by some investors, cryptocurrencies like Bitcoin could be returning to the headlines. Some analysts have always believed they offered an alternative to gold as a hedge against crises and the number of potential crises appears to be rising rapidly.

MarketWatch noted, “In traditional markets, it’s very common to see a stock rally leading up to the end of the year due to the increased activity in the private sector during the holidays.

However, after a volatile October, combined with uncertainty surrounding Trump’s trade war and the Fed’s monetary policy, price action has been less than positive in the last few weeks,” wrote Mati Greenspan, senior market analyst at eToro.

“It may be too early to say this, after all we’ve only seen very moderate crypto gains this week, but it is very possible that we might see a Santa Claus rally in the crypto markets.”

The chart below shows bitcoin is near the low end of its trading range which could be attractive to value investors in the market.

The stochastics indicator is shown at the bottom of the chart. This is a popular momentum indicator that could be interpreted in a number of ways. Among the most straightforward interpretations is to look for crossovers of the two lines and the most recent signal was a bullish crossover.

The Value of Techncials Could Be High In Crypto Markets

At least one study has found that technical analysis could be helpful to bitcoin traders. Andrew Detzel and several colleagues published “Bitcoin: Learning, Predictability and Profitability via Technical Analysis.” They found:

“We document that Bitcoin returns, while unpredictable by macroeconomic variables, are predictable by 1- to 20-week moving averages (MAs) of daily prices, both in- and out-of-sample.

Trading strategies based on MAs generate substantial alpha, utility and Sharpe ratios gains, and signiﬁcantly reduce the severity of drawdowns relative to a buy-and-hold position in Bitcoin, which already has a Sharpe ratio of 1.8.

We explain these facts with a novel equilibrium model that demonstrates, with uncertainty about growth in fundamentals, rational learning by investors with diﬀerent priors yields predictability of returns by MAs.”

This indicates traders should consider signals from popular indicators in these markets. Stochastics is similar to moving averages but provides fewer signals, making it slower and at times more likely to capture significant profits from trend reversals.

While bitcoin is the largest currency in the crypto market, it’s market share is just over 50%. 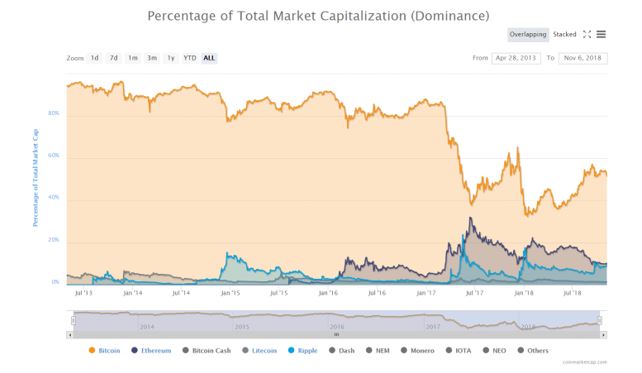 This is a significant change in the nature of the crypto markets and indicates traders should look beyond bitcoin. Among the leading coins is Ripple, or XRP.

Ripple is a real-time gross settlement system, currency exchange and remittance network created by Ripple Labs Inc., a US-based technology company. Ripple was released in 2012, and was designed to enable “secure, instantly and nearly free global financial transactions of any size with no chargebacks.”

It is built upon a distributed open source internet protocol, and supports tokens representing fiat currency, cryptocurrency, commodities, or other units of value such as frequent flier miles or mobile minutes.

XRP is the native currency of the Ripple network. XRP are currently divisible to 6 decimal places, and the smallest unit is called a drop with 1 million drops equaling 1 XRP. There were 100 billion XRP created at Ripple’s inception, with no more allowed to be created according to the protocol’s rules.

That means the system was designed so XRP is an asset with decreasing available supply. Not dependent on any third party for redemption, XRP is the only currency in the Ripple network that does not entail counterparty risk, and it is the only native digital asset.

XRP and Ethereum are the two largest currencies after bitcoin. The chart of Ripple is shown below.

The pattern is similar to the one seen for bitcoin. The price soared and then tumbled and has moved sideways for most of the year. Stochastics is on a buy signal and has shown a series of rising bottoms. This could be considered a bullish divergence.

Technical analysts believe momentum leads price which means that the higher lows seen in the stochastics indicator should be followed by higher lows in price and that is the definition of an up trend. A  bullish divergence occurs when the indicator develops an up trend before the price reverses to an up trend.

Of course, none of this is foolproof and the crypto market remains speculative. However, this market could be suitable for aggressive traders. The charts tell a consistent story that major currencies are on buy signals and that traders should look beyond bitcoin to find other trades.