Can the Fed Save the Stock Market?

The Federal Reserve, according to many analysts, was responsible for the great bull market in stocks that began in 2009. One explanation for the relationship is shown in the chart below. 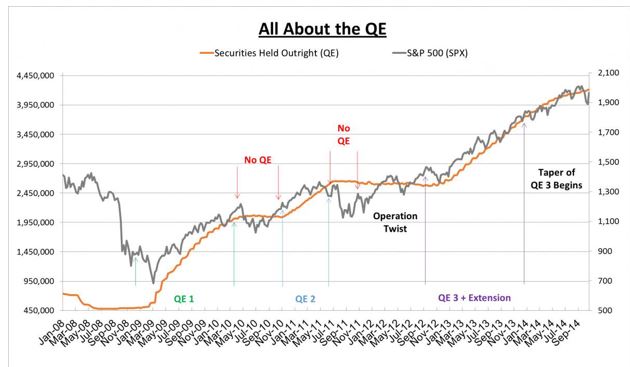 According to Peter Schiff of Euro Pacific Capital, the above chart tells the story of the Fed:

When the markets crashed in the fall of 2008, the Fed announced Quantitative Easing (QE1), a plan to purchase $600 billion in mortgage-backed securities (MBS) and agency debt, which was later expanded in March 2009 by another $750 billion.

But from April to November 2010, with QE on hiatus and the Fed’s balance sheet hardly expanding, stocks declined by about 11%. But when Fed Chairman Ben Bernanke strongly hinted in August 2010 that the Fed was ready to launch another round of QE, the markets rallied 18% in five months.

But when the curtain came down on QE2, and Wall Street had no hints that an encore was imminent, the S&P 500 put in a wicked 16% sell-off between July and August 19.

So on September 21, 2011, Bernanke announced the implementation of “Operation Twist,” authorizing the purchase of $400 billion of long term Treasury bonds financed by the sales of shorter term bonds, thereby extending the average maturity of the Fed’s portfolio and lowering long term interest rates.

It was hoped that Twist would offer the benefits of QE without expanding the Fed’s balance sheet.

So on June 20, 2012 the Fed extended Twist to the end of 2012, which sparked a summer rally that helped stocks regain all the losses from earlier in the year. But by September the rally slowed and another fall threatened. Perhaps the twisting wasn’t enough?

At this point I believe the Fed finally understood: No stimulus, no rally. And so on September 13, 2012, the Fed announced QE3, an open-ended commitment to purchase $40 billion agency mortgage-backed securities per month.

This eliminated the need for embarrassing QE re-launches every time the markets or the economy stalled. But the $40 billion monthly rate was apparently not enough to move stocks. From the time of the announcement to the end of 2012, the S&P declined about 2.3%.

Since the launch of QE3, the U.S. has seen lackluster economic performance, a deteriorating geo-political landscape, and, somewhat incongruously, a nearly relentless stock market rally. By the time that QE3 ran its course last month the Fed’s balance sheet had expanded by another 63% (to $4.2 billion) and the S&P 500 had surged 36%.

Although the rally in stocks continued during the taper of QE, the rate of increase slowed along with the rate of balance sheet expansion. Full throttled $85 billion per month QE persisted from September 2012 to December 2013.

Is That The Fed’s Job?

But the Fed has no obligation to boost stocks. According to the Fed:

Since 1977, the Federal Reserve has operated under a mandate from Congress to “promote effectively the goals of maximum employment, stable prices, and moderate long term interest rates” — what is now commonly referred to as the Fed’s “dual mandate.”

The idea that the Fed should pursue multiple goals can be traced back to at least the 1940s, however, with shifting emphasis on which objective should be paramount. That such a mandate may, at times, create tensions for monetary policy has long been recognized as well.

Now, with stocks falling, it is time to see if the Fed will support stocks again, as they appear to have done in the past. The chart below shows selling accelerated after the most recent Fed meeting.

Stocks are down and prices of commodities, including oil, silver, and lumber, are all down significantly. According to Barron’s:

“When asked about these developments at his press conference…Federal Reserve Chairman Jerome Powell responded that “what we’ve seen here is a tightening.”

The concern among traders is that the Fed will add too much to this tightening and potentially push the economy into recession on the basis of backward-looking data.

New York Fed President John Williams corroborated this thesis when he said on Friday that the Fed is “ready to reassess and re-evaluate” its forecasts if there are “risks to that outlook that maybe the economy will slow further.”

Can the Fed Rescue Stocks?

Right now, investors should consider that the Fed does not have any official responsibility for the stock market. Since 1987, Fed chairs have attempted to calm investors when prices have fallen. But there have been two steep bear markets in that time with prices falling more than 50% in 2008.

This demonstrates the Fed is powerless to stop bear markets. It also indicates the charts like ones showing how the Fed impacts stocks are likely overstating the case. Stocks, like the Fed, react to data and prices fall when the data is weak.

Right now, uncertainty is high and the economy appears to be slowing. This is a setup for a bear market and the Fed’s resources are limited. There is little chance the Fed can reverse the course of a bear market on its own.

That means investors should implement bear market plans instead of hoping for a Fed bailout.