Every quarter, executives of large companies share their outlook with analysts in conference calls after earnings are announced. In these calls, management often discusses items that are of concern. According to FactSet, the strong dollar is among the primary concerns of many companies. 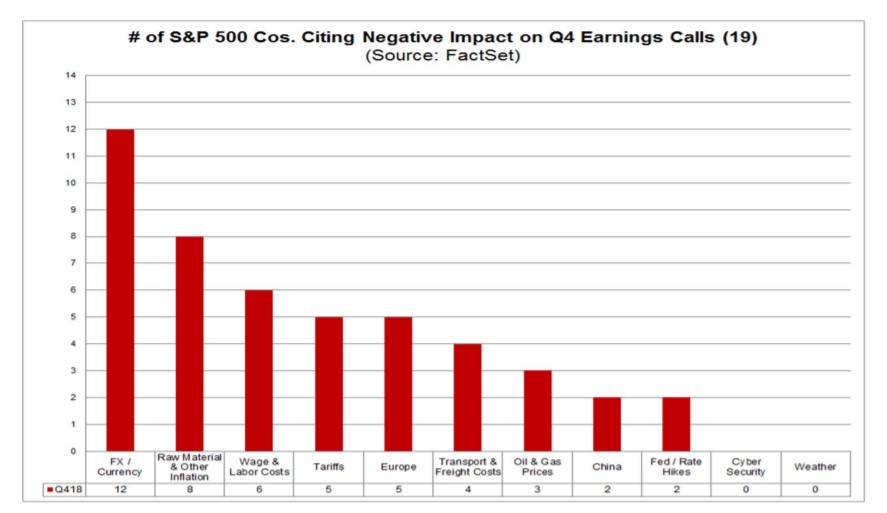 Specific markets can also be a concern, as Apple noted, “In fact, most of our revenue shortfall to our guidance, and over 100 percent of our year-over-year worldwide revenue decline, occurred in Greater China across iPhone, Mac and iPad. China’s economy began to slow in the second half of 2018.

The government-reported GDP growth during the September quarter was the second lowest in the last 25 years. We believe the economic environment in China has been further impacted by rising trade tensions with the United States.”

These concerns sent shares of Apple lower in January.

Rising Fears of an Economic Slowdown

Analyzing these calls can offer valuable insights to investors. That’s especially true when common themes emerge from the calls and that appears to be happening according to analysts at Gartner,

“Analysis of S&P 500 2018 earnings transcripts shows fading exuberance among corporate executives as the year progressed, according to Gartner, Inc. Several sectors are undergoing an earnings recession, and efficiency and restructuring initiatives are increasingly common.

“S&P 500 company executives are concerned about the risks and uncertainty from government interventions rather than suspecting any global macroeconomic downturn in the near term,” said Tim Raiswell, vice president at Gartner’s finance practice. “Talk of capital and cost-efficiency programs was increasingly common in earnings calls as 2018 progressed.”

“Mentions of the words ‘downturn’ and ‘slowdown’ were four times more likely to appear in earnings call in 4Q18,” said Mr. Raiswell. “Yet it’s important to consider that 4Q18 brought relatively extreme drops in stock prices. After 10 years of economic expansion, it’s not surprising to see analysts asking company executives about their preparations for cyclical economic weakness.”

Most executives, however, remained optimistic about the U.S. economy in 2019. The companies most exposed to China were more likely to report demand weakness in 2018, or predict it occurring in 2019. Sentiment was particularly positive in the technology and communications sectors.

“Even while expressing a broadly positive economic outlook, many of the world’s largest companies are starting to behave as if they are in a recession,” said Mr. Raiswell. “Ford, Pepsi and P&G are all recent high-profile examples of companies announcing large-scale efficiency programs.”

The most commonly cited economic concern was the slowing Chinese economy. 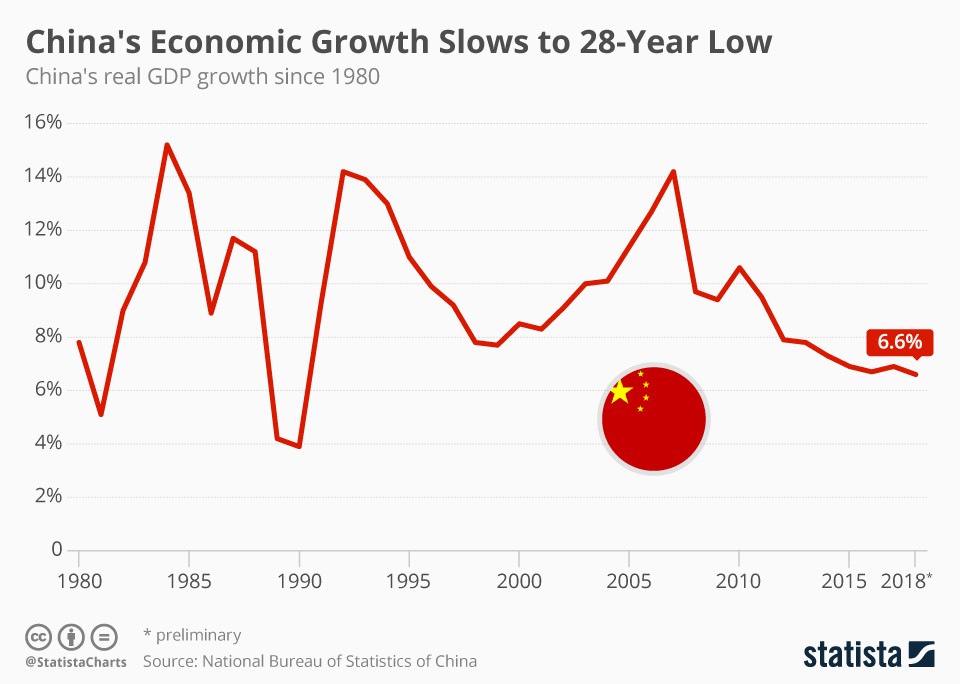 This theme emerged strongly in 4Q18 and has since picked up momentum in 2019 earnings calls. Much of this concern for China and the wider global economy outside the U.S. was more related to unpredictable government interventions than to any strong conviction of underlying economic weakness.

Common U.S.-related concerns were the recent government shutdown, tariffs and trade policy uncertainty. Worldwide political issues cited were Brexit and the fractious political landscape within the Eurozone, as well as concerns in the Middle East and in South America.

“Given the lack of realistic precedents in many cases, all parties are largely guessing about the extent to which political rhetoric will become firm policy and what the impact will be on companies’ order books,” said Mr. Raiswell.

“In this uncertain environment and after a long stretch of expansion since 2009, a significant number of leading firms are taking a recessionary stance and making preparations to capitalize on a downturn rather than be a casualty of one.”

The growth of nonbank lending emerged clearly in financial services earnings calls. Nonbanks offer high-risk loans to consumers at prices that many banks are not willing to match. This strong competition is why the theme emerged in earnings conversations.

“While many economists suspect that the next U.S. recession will take a different form than the financial liquidity crisis of 2009, there should be concerns among CFOs and treasurers that this growth of nonbank lending poses a risk to the U.S. financial system. Nonbank portfolios tend to be built on higher-risk loans to low-income clients. A combination of this phenomenon and any future easing of banking and lending regulations could spell trouble for the global economy in the next few years,” said Raiswell.

For example, P&G, Estée Lauder, Whirlpool and others all detailed significant firmwide productivity programs. Several vehicle manufacturers, such as Honda, Ford and Nissan, began initiatives to consolidate their production in fewer facilities to drive efficiencies. Many more firms reported deliberately lower capital expenditure than expected in 2018, as growth capital was reallocated.

“The CFO’s posture is critical now. Gartner cautions against a ‘business as usual’ approach that fails to change a winning formula when faced with turns in market direction,” said Mr. Raiswell.

“While signs of early preparation bode well for company performance, if a downturn appears, this preemptive behavior does raise questions. How much further will executive teams have to cut costs if demand plummets, and will this take the form of more-drastic forms of restructuring, such as layoffs and divestitures?”

Other analsyst saw similar themes. CNBC reported, “As this earnings season starts wrapping up, a common theme emerged from hundreds of conference calls: Managers had difficulty providing concrete guidance for 2019 earnings due to the uncertainty around trade, according to David Kostin, chief U.S. equity strategist at Goldman Sachs.

“Several management teams assumed that the March 1 tariff rate increase would occur. However, some firms remained optimistic about the prospects for a deal in 2019. Additionally, firms are seeing the impact of increased uncertainty in customer decision making,” Kostin said in a note.

The tone of the calls appears to have been generally concerned. There is less cause for alarm when management is muted but there is cause for concern since the calls were low on optimism. Uncertainty about trade, efforts to reduce costs and fears of recession could weigh on earnings.

These factors could also weigh on stock prices and with stock prices extended, now could be a time for investors to exercise caution as the executives of major companies are.