Buffett’s Putting His Money Into This Sector

Warren Buffett isn’t always right. But he is right quite often. That’s why it can be profitable for individual investors to watch what Buffett is doing with his own money. It’s also important to remember his actions are more important than his words.

That’s why we watch Buffett’s actions and they are disclosed through his company. Like other large investors Buffett’s publicly traded holdings are subject to disclosure. Large investors are required to tell us what stocks they are buying and selling every three months.

Through these publicly available filings, some of the world’s most successful investors, a list which includes Warren Buffett, share the results of their research.

We don’t know the specifics of their investment decision process, but we do see the results of the process in these disclosures and that provides us with an opportunity to benefit from the research those steep fees pay for.

Among the filings large investors must make is SEC Form 13F, more formally called the Information Required of Institutional Investment Managers Form. 13Fs must be filed once a quarter by any investment manager with at least $100 million in assets under management.

By law, 13Fs must be filed with the SEC within 45 days of the end of a quarter. For example, forms must be filed by February 15 for the quarter which ends December 31 each year. So we don’t know what Buffett is doing in real time, in all cases. But, he must usually disclose large buys and sells almost immediately.

Through Berkshire Hathaway, we can see that Buffett appears to be focusing his portfolio on large U.S. banks. Filings tell us what stocks the company owns, and Buffett does have additional managers involved in the portfolio.

However, from his public comments, it appears that he is still behind major investments and is most likely approving the large moves that reflect the portfolio strategy.

In the most recent 13f, Berkshire disclosed that the company bought more than $13 billion of bank stocks in the third quarter which ended on September 30. The largest disclosed buys included a $6 billion purchase of Bank of America (NYSE: BAC) and $4 billion in JPMorgan Chase (NYSE: JPM).

Berkshire has been an investor in JPM for some time, but the addition of BAC was new. After adding BAC, Berkshire now owns significant positions in seven of the country’s top ten banks. 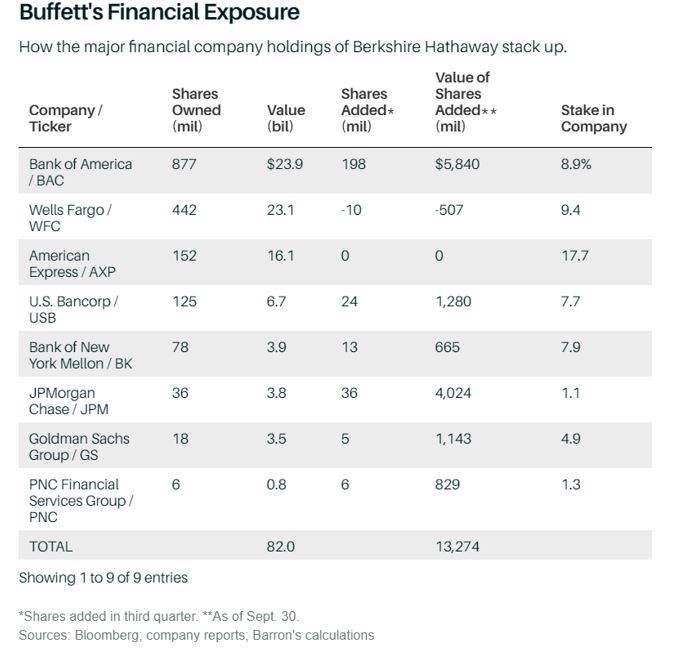 Some readers may be wondering which of the ten largest banks Berkshire doesn’t own. They are:

These three have heavy exposure to consumer loans, especially in the form of credit cards. Buffett may be signaling he believes this is a weak sector. But, that is speculation based on the fact that he avoided these three stocks.

Barron’s recently reviewed the financial sector and found analysts to be as bullish as Buffett appears to be.

“Buffett’s investments offer validation for what we see as the value in the group,” says Mike Mayo, a banking analyst with Wells Fargo. “Banks are less cyclical than they have been in decades and have more resilient earnings streams because of improved financial discipline and risk control.”

He sees earnings growth of 50% or more for JPMorgan and Bank of America over the next four years.

The report noted that Buffett “may see what Mayo and other bulls do: a group that has lagged behind the market despite strong earnings growth and the most generous capital returns of any major industry.

Earnings at large banks are expected to rise about 40% this year. With income rising and stock prices generally lower, bank valuations have contracted.

Large banks now have an average forward price/earnings ratio of just 10.2, against a forward P/E of 12.6 at the start of the year, based on 22 institutions covered by Barclays analyst Jason Goldberg.

“Investors can get good earnings growth and good capital returns at a discounted valuation relative to the overall market,” Goldberg says. “Just because we’re late in the cycle doesn’t mean we’re at the end of it.” He sees 9% growth in bank earnings per share in 2019.

John McDonald of Bernstein estimates that mid- and large-cap banks will return about 100% of their earnings to holders in dividends and buybacks in the year ending in June 2019, up from 60% in 2015.”

Besides owning large stakes in the seven big banks, Buffett also has a large position in American Express (NYSE: AXP) and some smaller bank positions. Altogether, Berkshire owns about $85 billion worth of financial stocks, more than 40% of Berkshire’s total equity holdings of $200 billion.

The ETF sold off sharply in the recent market decline.

Or, investors could consider Buffett’s most recent addition to the portfolio, BAC.

Morgan Stanley analyst Betsy Graseck agrees with Buffett on BAC. She sees 16% growth in 2019 earnings per share and an 18% gain in 2020, driven equally by operating profits and stock buybacks. In a client note after the third-quarter report, she urged investors to “dig in.”

Like XLF, BAC has sold off in the recent market decline. The long term chart shown below indicates the stock could be near the lower end of a trading range, or at a significant top.

The weekly chart of BAC demonstrates the risks of the sector. There is significant downside and not everyone has the ability to sit through large declines like Buffett does. But, the financial sector is obviously one Buffett is interested in.

Investors could, of course, also invest directly in Berkshire Hathaway but that is an expensive investment. Given the risks, it could be best to put stocks like BAC on a watch list and consider buying when the market shows signs of rebounding.

Like Buffett, it is important to plan for the downturn and be positioned to benefit. He doesn’t sell everything in a bear market and individuals might not be best served by panicking. It could be best to think like Buffett and add to long term positions.