Buffett Could Be Wrong 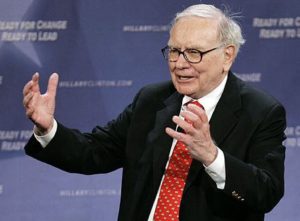 Over the weekend, Warren Buffett held his annual meeting for share holders of Berkshire Hathaway. The meeting includes a question and answer session where Buffett accepts questions from the audience on almost any topic and he shares his thoughts.

Buffett’s Thoughts on Gold Preview His Opinion on Crypto

In 2012, Buffett offered some detail into how he thinks of gold as an investment. Gold, he wrote at the time, “has two significant shortcomings, being neither of much use nor procreative…if you own one ounce of gold for an eternity, you will still own one ounce at its end.

He believes that the motivating factor behind most gold purchases is the belief that “the ranks of the fearful will grow.” Rising prices generate additional buying enthusiasm, attracting purchasers who see the rise as validating an investment thesis.

Buffett explained that gold produces no wealth, “Today the world’s gold stock is about 170,000 metric tons. If all of this gold were melded together, it would form a cube of about 68 feet per side. (Picture it fitting comfortably within a baseball infield.) At $1,750 per ounce — gold’s price as I write this — its value would be about $9.6 trillion. Call this cube pile A.

Let’s now create a pile B costing an equal amount. For that, we could buy all U.S. cropland (400 million acres with output of about $200 billion annually), plus 16 Exxon Mobils (the world’s most profitable company, one earning more than $40 billion annually). After these purchases, we would have about $1 trillion left over for walking-around money (no sense feeling strapped after this buying binge). Can you imagine an investor with $9.6 trillion selecting pile A over pile B?”

To him, the answer is simple:

“A century from now the 400 million acres of farmland will have produced staggering amounts of corn, wheat, cotton, and other crops — and will continue to produce that valuable bounty, whatever the currency may be. Exxon Mobil (XOM) will probably have delivered trillions of dollars in dividends to its owners and will also hold assets worth many more trillions (and, remember, you get 16 Exxons). The 170,000 tons of gold will be unchanged in size and still incapable of producing anything. You can fondle the cube, but it will not respond.” 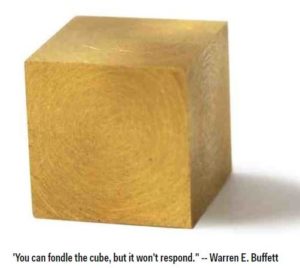 At the meeting, Buffett told the audience that bitcoin and other cryptos are nonproductive assets. They have no intrinsic value. He noted that the market is a potential breeding ground for “charlatans” who take opportunities to rip off people trying to get rich in something they don’t really understand.

His opinion is clear that “cryptocurrencies will come to bad endings.” As he often does in the Q&A portion of the annual meeting, Buffett then turned to his business partner, Charlie Munger, for his thoughts on the subject.

Munger was equally clear. “I like cryptocurrencies a lot less than you do. To me, it’s just dementia. It’s like somebody else is trading turds and you decide you can’t be left out.”

While their opinions are always clear, it is important to remember that Buffett and Munger are simply very successful investors. They have missed out on many great investments, including Google and Amazon, because they didn’t understand technology.

While their opinions are worth respecting, there is no need to completely abstain from cryptocurrencies because Buffett finds flaws in the market.

Trading the Market As It Is

Buffett is a fan of making investment decisions based on data rather than opinions. He has made mistakes, as he freely admits. He has underperformed the market for extended periods of time but he sticks with his convictions.

The chart below shows that now is an ideal time to consider trading bitcoin.

The chart includes the price of bitcoin futures along with the 50-day moving average (MA), shown as the red line, and the 200-day MA which is the blue line.

At the end of last year, prices did behave as if they were in a bubble. The price moved well above its 200-day MA. At the peak, the price was more than 80% above the MA. Prices tend to move back towards their MA and that was a time when the price appeared likely to fall.

That buy signal was given on April 24.

As the chart shows, the price of bitcoin fell below its 200-day MA. It has since rallied back above that level. However, the 200-day MA could provide a risk management strategy. Traders could buy now and plan to exit positions on a break below the MA.

The current price is about 16% above the 200-day MA. But, risk is not necessarily limited to that level. Cryptos are volatility and an order placed 16% below the market could, in fast moving markets, be executed at a price 20%, 25% or even more below the market price.

However, that is true in any volatile market. For that reason, another risk management tool could be considered. In the next chart, the MACD indicator has been added at the bottom of the chart.

Traders could use this indicator as a sell signal. They could sell when it turns bearish, no matter what the MAs are saying. In this way, risk is being aggressively managed.

Of course, Buffett and Munger could be right about cryptos. However, they could also be wrong. If they are wrong, investors stand to make billions of dollars.

Rather than missing out on that potential, a simple risk management strategy could be used. This gives traders the best of both worlds with upside potential and potentially limited risks.