Big Investors Are Doing Something Small Investors Should Consider

On Wall Street, many analysts talk about the smart money. This represents the large funds and investors with millions of dollars. They are called smart money not necessarily because they are all highly intelligent. They are smart money because when they act together, they move markets.

There’s nothing mysterious about smart money. Large investors move significant amounts of money. They tend to read similar research and notice similar trends in the market. Some will lead and others will follow but they tend to move as a herd.

While some analysts focus on the underlying causes of market moves, others believe that the cause is less important than the trend so they simply follow the smart money.

According to The Wall Street Journal, many large investors are buying Treasuries. The news service noted,

Domestic investors purchased a record of roughly 55% of the new U.S. government notes and bonds sold at auction in January. That is up from 51% a year ago. 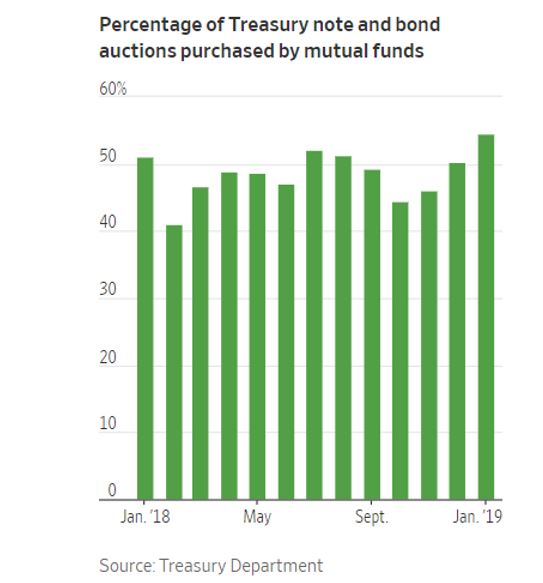 Investors are also winning a greater share of auctioned bonds—more than 90% through February, up from 82% in the year-earlier period. That suggests mutual funds are willing to bid at higher prices than before to ensure that they get the bonds they want. 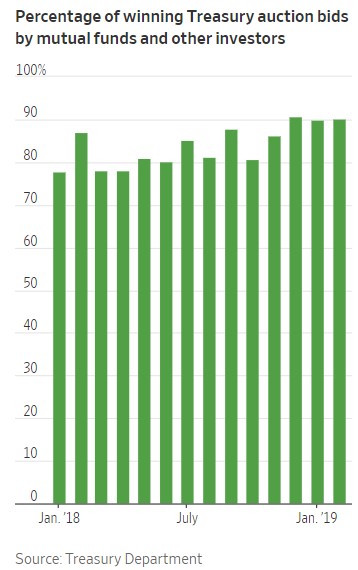 “The Fed’s going to be on an extended pause,” said Michael Kushma, chief investment officer for fixed-income with Morgan Stanley Investment Management. “The hurdle for resuming rate hikes is pretty high.”

Investors are now betting that an interest-rate reduction is more likely by the end of the year. That comes after last week’s jobs report missed estimates by a wide margin and the European Central Bank dashed any plans to raise rates this year. Investors will get a fresh look at the situation this week as the Commerce Department reports on retail sales data Monday and the Treasury auctions $78 billion of notes and bonds.

This year’s Treasurys demand surprised some analysts after expectations for a pickup in growth and inflation around the world helped drive yields to multiyear highs in November. Yields rise as bond prices fall.

Many had said the rising size of Treasury auctions, lifted by the government’s tax cuts and spending increases, was one factor behind the climb in yields last year.”

” Much of the demand has stemmed from investors’ increasing appetite for longer-term debt, which tends to lose its value more quickly when interest-rates are rising, said Jim Vogel, head of interest-rate strategy at FTN Financial.

While the amount of auction bids submitted by investors has remained stable, their higher winning percentage suggests they are bidding at higher prices, he said.

Few are betting that policy makers will lift rates again soon. Fed-funds futures, which investors use to bet on the direction of central bank policy, recently showed an 80% probability that the Fed holds rates steady this year, with 20% odds that rates will fall and no chance they will end the year higher, according to CME data late Thursday. The odds of a rate increase have fallen from 23% a month ago.”

Updated probabilities are shown in the next chart. 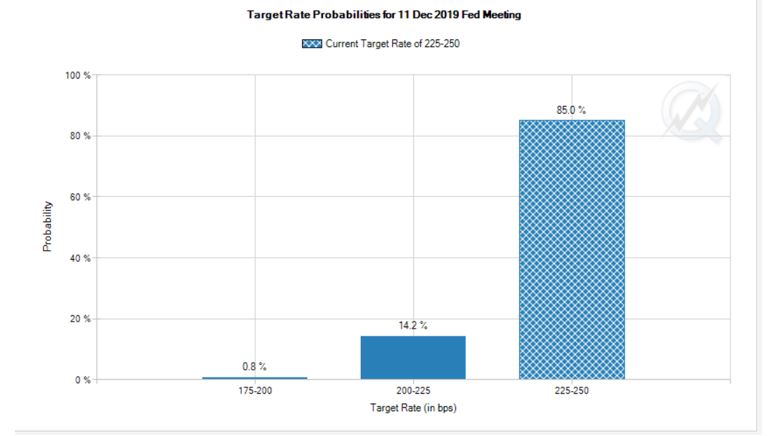 While weaker job growth may prevent the Fed from raising rates, higher labor costs could prevent it from lowering them.

If You Can’t Beat Them, Join Them

Individual investors can follow the smart money into Treasuries. Treasury notes could be bought for as little as $100. And the purchases can be made at no cost.

Treasuries can always be bought, for free, through the Treasury’s web site, TreasuryDirect.gov. Individuals obtain the interest rate available to large investors by submitting noncompetitive bids for bills, notes or bonds through that site. There is no fee so returns are generally going to beat those available through passive money market funds or exchange traded funds (ETFs).

Investors could consider Treasury notes, like other marketable Treasury securities, are debt obligations of the U.S. Government and are backed by the government’s full faith and credit. Offered in multiples of $100, notes pay interest every six months at a rate determined when they are auctioned.

Notes can be held to maturity or sold prior to maturity. At maturity, the principal is paid to the owner.

Notes can be purchased either directly from Treasury or through an intermediary such as a bank or broker. Interest from notes is exempt from state and local income taxes, but subject to federal tax.

Notes may strike the balance between risk and reward. Buying bonds, securities that mature in more than 10 years and potentially as long as 30 years, are subject to greater interest rate risk. That means when interest rates rise, the bonds will lose part of their value.

Even if an investor holds a 30 year bond until maturity and receives back 100% of the principal invested in the bond, there could still be a loss of purchasing power due to inflation. While it is possible that inflation will stay low for 30 years, many investors will be more comfortable with less risk than that.

If there is a flight to safety, the investment could increase in value, at which time it could be sold if held in a brokerage account. TreasuryDirect could be best for investors committed to owning securities through maturity.