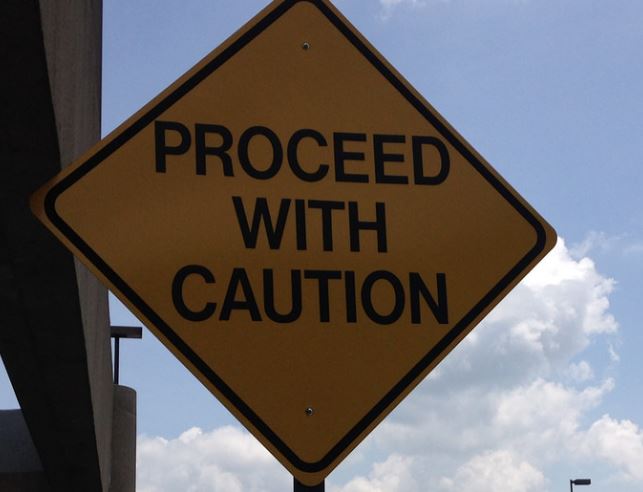 Investing is challenging for a number of reasons. One reason is that it takes unique insights to succeed. Another reason is that it is important to pay attention to the ideas of others so that you can be on the right side of major trends.

This might sound like contradictory positions. But it does line up with the way major price trends unfold. At the very beginning of a trend and at the end of a trend, the majority of investors will be wrong. But, in the middle of the trend they will be right.

It’s always been this way. Charles Dow called the early movers the “smart money” and noted they accumulated stocks as prices bottomed and distributed their shares by selling as tops formed. They were ahead of the crowd.

The smart money in the modern markets is the large investors which includes major asset management firms. Some of the largest asset managers are now bearish.

According to ZeroHedge, “UBS’ wealth management oversees $2.4 trillion in capital and entrusted by some of the world’s richest, is poised to underweight stocks as real money and systematic investors pare risk amid flagging bull-market momentum.

According to Andreas Koester, head of global asset allocation at UBS Wealth, the quantitative-investing platform is close to trimming its equity holdings to 20% from a neutral 50%, a shift that would lead to an avalanche of selling as hundreds of billions in stocks are forced to find a new home.

The reason why the so-called Systematic Allocation Portfolio is about to move the relative safety of cash and high-quality bonds over growth-sensitive assets, is due to a deteriorating mix of signals from GDP, PMIs, corporate earnings and retail sales.

The bearish signals from the data-crunching robot are similar to growing warnings on Wall Street about the global economic trajectory even as other robots in the form of commodity trading adviser quants are forced to lighten up on U.S. stock allocations as volatility picks up, resulting in even more selling.

Bearish signals from the data-crunching robot echo fresh warnings on Wall Street about the global economic trajectory while quant peers like commodity trading advisers ease up on U.S. stock allocations.

“At the moment, the momentum signal is strongly negative,” Koester told Bloomberg.

“While the economy is doing fine, the market is worried about something else, and you can argue that it might be protectionism, oil prices, fear of a recession in 2020.”

Yet despite robust global data, equities slumped to their worst month in seven years in October battered by trade wars, valuation fears and rising rates. This has led traditionally cheerful investment banks like Goldman Sachs to call for “a sustained period of low returns” across equities and credit, and warning that “stocks may be about to enter a sustained bear market.”

The firm’s market model is shown below. 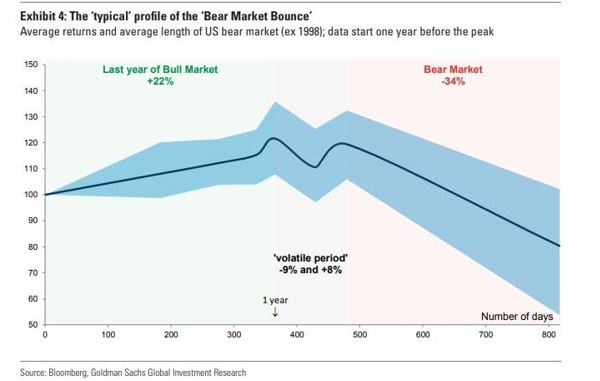 Bank of America agrees that the decline could continue.

“We remain bearish, as investor positioning does not yet signal ‘The Big Low’ in asset markets,” says Hartnett, in the bank’s closely watched November fund manager survey.

For one, the bank’s Bull & Bear indicator, which tracks investor sentiment is hanging around 3.1, meaning no “contrarian buy signal” is being flagged, he says. The gauge runs from 0 to 10, with the high end representing extreme bullishness and the low end extreme bearishness.

Managers surveyed believe the peak of this bull run is not here yet, with 12% upside seen from current levels, taking the S&P 500 to 3,056 (weighed average). That said, one of three respondents said they think the market has already peaked.” 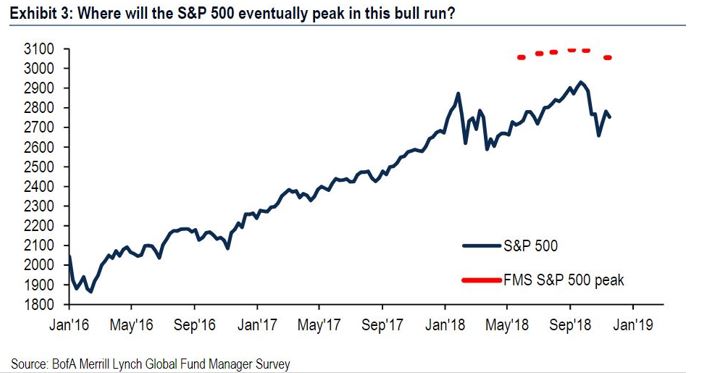 The survey also showed that U.S. markets were once again the most favored equity region, with allocation climbing 14 percentage points to a net overweight of 14%.

Cash levels also dropped in November to 4.7% from 5.1%, meaning investors bought into that October correction, upping exposure to U.S. and emerging-markets stocks, REITs and health care, which is now the No. 1 overweight, in the survey. 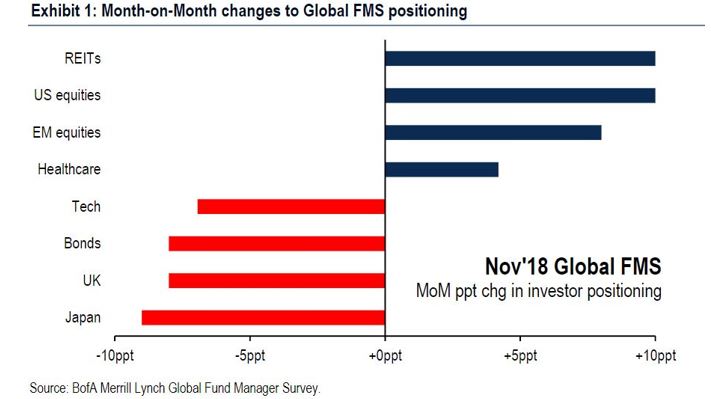 And in a surprise to few, allocation to global techs fell out of bed, with just a net 18% of managers saying they’re overweight the sector.

CNBC’s Jim Cramer noted that a significant “slump in shares of so-called FANG names — the highflying quartet of Facebook Inc, Amazon.com Inc., Netflix Inc. and Google parent Alphabet Inc., that are among the most influential on Wall Street due to their massive market values and the degree by which investors have piled into those investments for hope of consistent growth.”

All of those companies are in a corrective phase, defined as a drop of at least 10% from a recent peak, and Netflix and Facebook shares have shed around a third of their values since hitting 52-week peaks.

Cramer said that the economy is solid and has championed the idea of the Federal Reserve’s pausing, or at least slowing down, its interest-rate-raising initiative to assess current market conditions, aligning himself with President Donald Trump, who has lobbed a number of criticisms at Fed boss Jerome Powell’s plan to normalize interest-rate policy from crisis-era lows.

Steve Cohen, the billionaire hedge-fund investor, is the latest high-profile Wall Street player to remind us the boom times have a shelf life according to MarketWatch.

“I don’t think returns over the next two years are going to be very good. If the market hangs in there, there’s just going to be marginal returns.”

Cohen spoke recently at a fundraiser according to the Financial Times.

“We’re definitely late cycle,” explained Cohen, who rarely comments publicly about the stock market. “So at some point we’re going to enter a bear market, and it’s going to happen in the next year and a half, maybe two.”

Cohen is controversial. His SAC Capital Advisors firm pleaded guilty to securities fraud in 2013 and recently raised $5 billion for his new fund.

As a funny aside to the conversation, Glenn Fuhrman, the co-founder of MSD Capital who was conducting the interview, joked that Cohen is no Warren Buffett of Berkshire Hathaway. Cohen’s response: “And Warren Buffett’s not me.”

That’s a reminder to all of us that it could be best to ignore the fact that Buffett is buying and bullish. Dangers are high and hedgies like Cohen could be best prepared for upcoming market conditions.