Market analysts often say that they don’t ring a bell at the top indicating that there is never a loud and clear warning that the stock market has reached a top and is likely to fall. Instead, they need to look for more subtle signals.

Among the signals analyst search for is a proverbial “rush to the exits” by smart money which often includes the venture capital finds that fund Silicon Valley startup companies.

That makes recent news that one of the largest VC funds is looking for a way to cash out as The Wall Street Journal reported,

“SoftBank Group Corp. is considering audacious fundraising plans, including a public offering of its $100 billion investment fund and the launch of a second fund of at least that size, as it looks to seize on an exploding startup scene, people familiar with the matter said.

More immediately, SoftBank is negotiating with the sultanate of Oman for an investment of several billion dollars in its existing $100 billion Vision Fund, which raised nearly all its cash from Saudi Arabia and Abu Dhabi, the people said.

The fund’s staff is hustling to keep up with the frantic pace of deal making by SoftBank founder and Chief Executive Masayoshi Son, who has invested nearly all the money that the Vision Fund took in just two years ago.

Highlighting the need for new funds: Mr. Son recently returned from China, where he negotiated informal deals worth several billion dollars that the Vision Fund doesn’t yet have, one of the people said.

The Vision Fund had planned to invest its money over four years, some of the people said, but will have done so in just over two.

Coming IPOs of companies it is invested in—including Uber Technologies Inc. and WeWork Cos.—will free up some money, but not enough to fund everything Mr. Son wants to buy.

The fund plans to double its staff to 800 people from 400 over the next 18 months, one of Mr. Son’s top deputies said this week at a conference in Los Angeles, compounding the pressure to raise more money so they can be paid to hunt for deals across the globe.

A Vision Fund IPO is the most ambitious of the plans under consideration and would take place after the fund is fully invested, likely by this fall, according to people familiar with the matter.

The hope is to create a smaller version of Warren Buffett’s Berkshire Hathaway Inc. —only loaded with young technology companies, many of which have yet to turn a profit, instead of a stable of well-established utilities, insurers and energy companies.

An offering like this is largely unprecedented. If successful, it would tap into a new pool of money—mom-and-pop investors—who typically can’t invest in venture-capital funds due to regulations meant to protect unsophisticated investors from risky assets.

SoftBank executives are working to overcome those regulations, some of the people said, and it might not happen. Another barrier is that some of the fund’s hottest investments are set to go public themselves this year, which would reduce the allure of its offerings.”

Doubts About the Deal

There could be some problems with getting the offering approved as Bloomberg’s Matt Levine notes, “I mean it doesn’t sound especially legal, at least under U.S. law.

Berkshire Hathaway, for all that we think of it as a Warren Buffett stock-picking vehicle, is actually an insurance company with a bunch of other wholly-owned operating businesses.

A fund consisting entirely of minority stakes in other companies—that is, a venture fund—would seem to count as an “investment company” under U.S. law, and U.S. rules do tend to discourage widely marketed investment companies that buy mainly illiquid private stakes.”

This could prevent Softbank from completing this deal.

Getting In Ahead of the Offering

While there could be concerns about a separately traded investment fund, there is a way to invest in SoftBank which manages the fund through an ADR in the US markets which trades as (Nasdaq: SFTBY.) 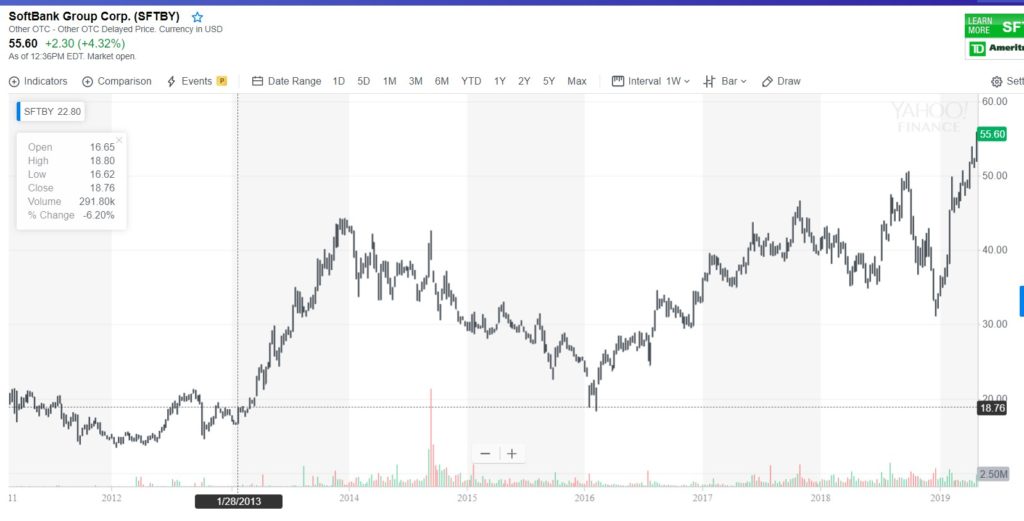 SoftBank is not the Vision Fund although they share management.

SoftBank is described as “a Japanese multinational holding conglomerate headquartered in Tokyo, Japan. The company owns stakes in a number of companies including:

There are some reasons to consider buying SoftBank now as the Financial Times recently reported, “

“Mr Son as an opportunistic and even whimsical investor was given fresh ammunition last week with the revelations that he had lost $130m of his personal fortune on a bitcoin investment and poured €900m of SoftBank funds into Wirecard, the German payments group fighting an accounting scandal.

… Armed with cash from the $23.5bn listing of SoftBank’s mobile unit and Japan’s largest-ever corporate bond sale to retail investors, and with Uber’s blockbuster IPO around the corner, Mr Son is finally starting to dispel the notion that his Japanese technology conglomerate is risk-addicted and debt-laden.

So flush is Mr Son feeling that he launched a $5.5bn share buyback in February.

“Until now, SoftBank was viewed as a group loaded with debt and doing dangerous things,” Mr Son said in February. “In time, all that noise will go away.”

Mr Son has consistently complained that investors do not appreciate the group’s true worth. In February, when its market capitalization was ¥9tn ($80bn), he argued that SoftBank shares were undervalued by nearly 60 per cent.

His calculations put the company’s net debt at ¥3.6tn and its trove of equity holdings including Alibaba, WeWork and Uber at ¥25tn, implying ¥21tn of value for shareholders.

Now, more investors are beginning to buy into his view.

Since the public offering on December 19 of stock in its mobile subsidiary, SoftBank Group shares have risen 41 per cent to a 19-year high.

The cost of five-year credit-default swaps to insure against non-payment of debt by SoftBank has dropped by nearly 100 basis points since the start of the year to 170 bps, according to data from Bloomberg, having risen sharply after the murder of journalist Jamal Khashoggi prompted concern about the group’s ties to Saudi Arabia.

Richard Kaye, a portfolio manager at French asset manager Comgest, a SoftBank shareholder with a $50m stake, said that events, including the flotation of SoftBank’s mobile unit and the filing for an IPO by Uber, where SoftBank is the largest shareholder, have given investors confidence in the Japanese group’s ability to monetise its assets.

“This could be the beginning of a rather long reassessment by investors of SoftBank’s potential,” Mr Kaye said.”

Whether the Vision Fund IPO succeeds or not, SoftBank could be worth a look.