Another Reason to Prepare for the Bear Market 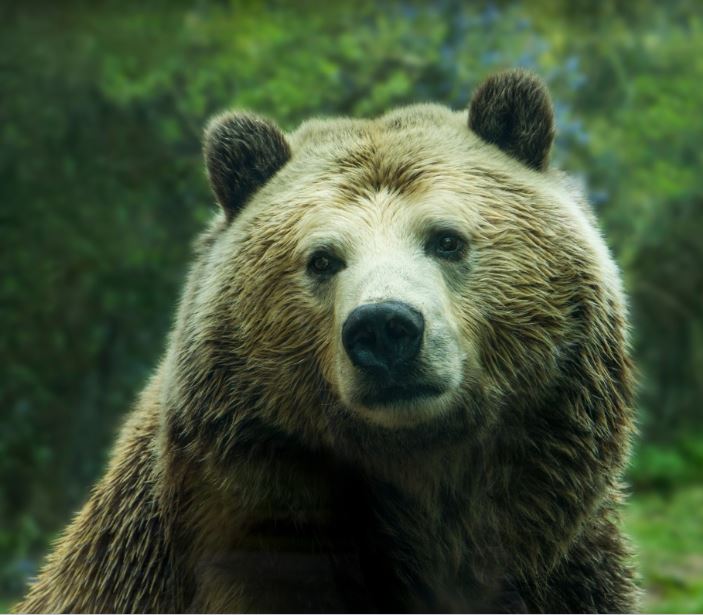 Stocks in the U. S. have been volatile lately and volatility implies an unusually large amount of downside risk. That fact alone has made some traders nervous. But, that fact has little impact on investors who are invested for the long term. They tend to focus on fundamentals. And, here too is cause for concern.

What he meant was that the short term price moves in stocks can be emotional. That explains the past few weeks. But, that has nothing to do with the long run in Graham’s analysis. The long run trend is determined by fundamentals.

Fundamentals Point to Better Values Outside the U. S.

So far this year, U. S. stocks have been outperforming global stock markets. That, in part, has led to gains in U. S. stocks outpacing fundamentals and putting U. S. valuations higher than those in the rest of the world.

According to Business Insider, “As Bank of America Merrill Lynch’s (BAML) US Equity and Quant Strategy team notes, the divergence this year has left US stocks richly valued compared to those in other regions.”

“On earnings, the S&P 500 now trades at a 12% premium to MSCI ACWI [all country world index] ex US, a high since 2009, and trades at a premium versus each of the major global regions — Europe, Japan, and emerging markets — concurrently for the first time since 2009.”

And when it comes to book valuation, the premium attached to US stocks compared to those in other markets is now the highest level on record, hitting a multiple of 2.1 times as at the end of August. 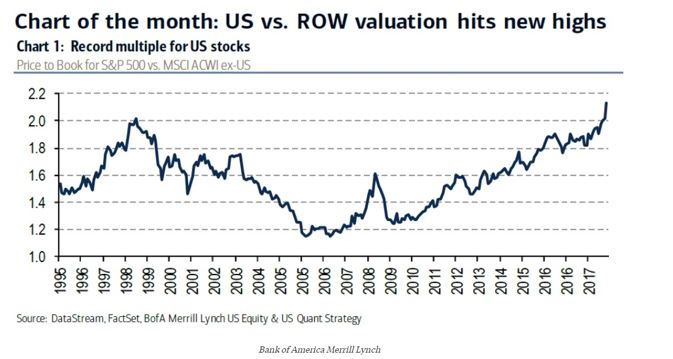 The price-to-book ratio reflects the value investors attach to a company’s equity relative to the book value of its equity, or the difference between its assets less liabilities.

This indicates investors could find better values looking at markets outside the U. S. And, this opinion could be confirmed by another potential concern about U. S. markets.

Valuations Are High While Another Concern Looms in the Distance

Elevated valuations are not a problem if growth is high. Unfortunately that may not be the case in the U. S. As Axios notes,

“The big question: Is there a “sugar rush” from the tax cuts, and if so, does it matter enough that the market and economy will tank when it wears off?”

That chart shows that earnings growth is set to slow. This comes as valuations are high. But, there are two sides to slowing earnings as Axios noted:

“One camp says don’t sweat the chart. Waning influence of tax cuts won’t have a disastrous impact on companies’ earnings growth, according to recent projections by Nationwide Financial’s Mark Hackett:

“Even factoring out the contributions from lower corporate taxes and share buybacks, earnings growth would still be at a healthy rate … indicating that most earnings strength is not coming from the ‘sugar rush’ of tax reform.”

The other side: JPMorgan says in a recent note that U.S. stocks are riding a “sugar high” thanks to the tax cuts and you should sweat that chart.

Analysts there say the end of the tax-cut impact will lead to dramatic earnings declines followed by cuts to earnings guidance.

The bottom line: We’re not going to know for a while, so for now, pick a side. If you’re in the sugar-rush camp, the question is, “When will the economy and markets come down from the high?”

If you’re not, you’re hunting for data points that prove the economy’s 10-year expansion is on solid footing, with or without the boost from the tax cuts.”

What to Do Now

Of course, there is no single best answer as to what to now. U. S. stocks are likely to make a big move but the move could be up or down. Many analysts expect a down move but there could be an up move as the economy heads for another year of growth.

Many economists expect a recession in 2020. Bloomberg recently listed some of the most prominent forecasts:

But, given the weight of the evidence that U. S. stocks are overvalued relative to the rest of the world, it could be best to increase exposure to foreign stock markets. This is especially true since earnings growth is slowing and that could lead to lower valuations.

European stocks have already pulled back and they could have less down side in the event of a synchronized global stock market sell off. In that scenario, dividend stocks could be safer than growth stocks since dividends can cushion down side risks.

Investors could search for the best dividend payers in Europe or could use an exchange traded fund (ETF) like ProShares MSCI Europe Dividend ETF (NYSE: EUDV).  This ETF has already pulled back.

It could be attractive as a way to diversify outside the United States and obtain at least some income in this economy. Investors could average into positions over several months to possibly limit down side risks and obtain a lower average cost if prices do fall.