An Often Overlooked Problem With Buy and Hold

“a passive investment strategy for which an investor buys stocks and holds them for a long period regardless of fluctuations in the market. An investor who uses a buy-and-hold strategy actively selects stocks but has no concern for short-term price movements and technical indicators.

Conventional investing wisdom shows that with a long time horizon, equities render a higher return than other asset classes such as bonds.

Recognizing that change takes time, committed shareholders adopt buy and hold strategies. Rather than treating ownership as a short-term vehicle for profit in the mode of a day trader, buy-and-hold investors keep shares through bull and bear markets.

Therefore, equity owners bear the ultimate risk of failure or the supreme reward of substantial appreciation.”

The risk of failure may be higher than some investors realize but may be more likely than the possible realization of substantial appreciation.

Examples of Buy and Hold Strategies

One reason for the popularity of buy and hold investing lies in the fact that investors are subject to biases. One of those biases is that investors sometimes see what they want to see. More formally, that is the confirmation bias, also called confirmatory bias or myside bias.

Confirmation bias is the tendency to search for, interpret, favor, and recall information in a way that confirms one’s preexisting beliefs or hypotheses. It is a type of cognitive bias and a systematic error of inductive reasoning.

People display this bias when they gather or remember information selectively, or when they interpret it in a biased way. The effect is stronger for emotionally charged issues and for deeply entrenched beliefs. Confirmation bias is a variation of the more general tendency of apophenia.

A series of psychological experiments in the 1960s suggested that people are biased toward confirming their existing beliefs. Later work re-interpreted these results as a tendency to test ideas in a one-sided way, focusing on one possibility and ignoring alternatives.

In certain situations, this tendency can bias people’s conclusions. Explanations for the observed biases include wishful thinking and the limited human capacity to process information. Another explanation is that people show confirmation bias because they are weighing up the costs of being wrong, rather than investigating in a neutral, scientific way. However, even scientists can be prone to confirmation bias.

Confirmation biases contribute to overconfidence in personal beliefs and can maintain or strengthen beliefs in the face of contrary evidence. Poor decisions due to these biases have been found in political and organizational contexts.

The chart below shows why some investors believe buy and hold investing works.

The next chart is an example of the data buy and hold investors ignore.

It’s the Nikkei stock index, the benchmark for Japanese stocks, that shows a 40% decline over the past 29 years.

There are a number of individual stocks in the United States that delivered losses for more than 20 year period. One example is Ford (NYSE: F).

There are even more examples of stocks that underperform the broad stock market for extended periods of time. In these cases, an investor’s opportunity cost is high.

Opportunity costs represent the benefits an individual, investor or business misses out on when choosing one alternative over another. While financial reports do not show opportunity cost, business owners can use it to make educated decisions when they have multiple options before them.

Because they are unseen by definition, opportunity costs can be overlooked if one is not careful. By understanding the potential missed opportunities one forgoes by choosing one investment over another, better decisions can be made.

In other words, while owning Ford, an investor missed the opportunity for market beating gains.

Another Problem for Buy and Hold Investors

Without realizing it, some investors ignore what may be the greatest risk that faces a buy and hold investor. The company could simply cease to exist.

One study found that the average life expectancy of a company on the S&P 500 used to be 75 years.  Today that number is just barely 15 years.  Research shows that by the year 2027, 75% of the companies on the S&P 500 will be replaced. 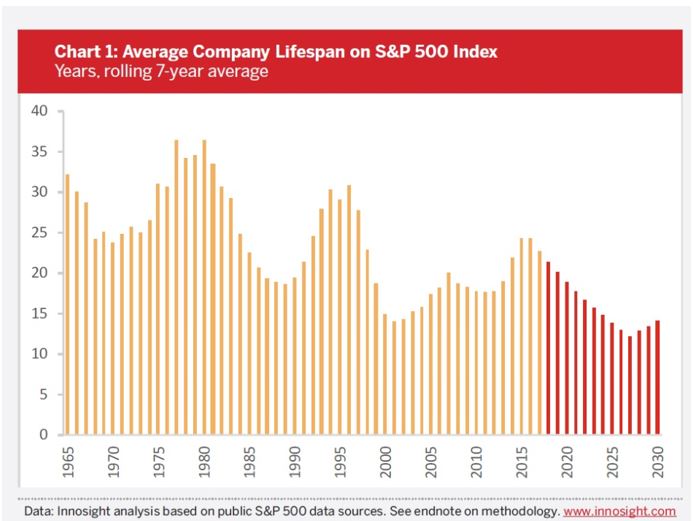 The researchers noted, “There are a variety of reasons why companies drop off the list. They can be overtaken by a faster growing company and fall below the market cap size threshold (currently that cutoff is about $6 billion).

Or they can enter into a merger, acquisition or buyout deal. At the current and forecasted turnover rate, the Innosight study shows that nearly 50% of the current S&P 500 will be replaced over the next ten years.

This projection is consistent with our previous analysis from 2012 and 2016, which Innosight originally conducted with Creative Destruction author Richard Foster.”

Mergers often destroy value and could be a signal to sell long term holding for some investors. Others will hold on believing the management team of the acquired company acted in the best interests of long term investors when selling.

This presents the investor with the agency problem.

The manager, acting as the agent for the shareholders, or principals, is supposed to make decisions that will maximize shareholder wealth even though it is in the manager’s best interest to maximize his own wealth.

The agency problem arises due to an issue with incentives and the presence of discretion in task completion. An agent may be motivated to act in a manner that is not favorable for the principal if the agent is presented with an incentive to act in this way.

The best way to avoid this problem could be to buy and watch the stocks you own. Sell when performance lags or when the initial purchase thesis changes.

Buy and hold does work sometimes. But it may fail more often than understood and presents risks that should be understood by successful investors.