An ETF Highlights Stocks to Buy

We often think of exchange traded funds, or ETFs, as investment vehicles. That is, after all, their primary purpose.

An ETF offers all the advantages of a mutual fund including professional management and a broadly diversified portfolio. ETFs also offer lower fees than mutual funds and can be bought and sold at any time unlike mutual funds which are priced just once a day.

The professional management of the fund can also help us find potential trades. ETFs are generally managed to track an index. This means managers must buy and sell stocks that are in the index to match the cash flows of the fund.

Despite the fact that they are indexed, ETFs can offer useful information for traders looking for potentially top performing stocks. This is a simple form of momentum analysis.

A Top Down Approach to Analysis

The momentum factor is shown in the chart below from Dr. Kenneth French’s web site. French, along with Nobel Prize winning economist Dr. Eugen Fama, developed the market model that includes the momentum factor. 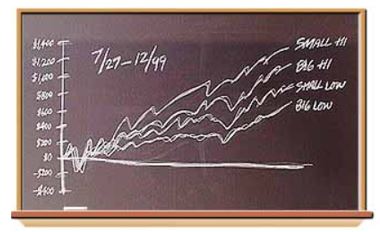 Momentum can help us identify potential winners in a number of ways. One way is to start with the list of top performing ETFs.

Among the market leaders, we find iShares Latin America 40 ETF (NYSE: ILF). While most major world stock markets are lower or slightly higher this year, Latin America has emerged as a pocket of strength.

Brazil’s Bovespa is up about 13%. That gain helps explain the success of ILF, one of the most widely held ETFs offering direct exposure to Latin America. ILF holds nearly $1.9 billion in assets. The fund is up about 12% in 2018, significantly more than the S&P 500 and other major world index ETFs.

The ETF owns 40 of the largest companies in the region, blue chips that are selected for their investment appeal, fundamentals and liquidity. The portfolio is concentrated on financials, with about 36% of assets in that sector. Materials, energy and consumer staples account for 14% to 17% each.

Geographically, iShares Latin America 40 is almost exclusively weighted on three countries: Brazil is 60% of the fund, Mexico 22% and Chile 11%. Peru and Colombia have small participation and are the only other nations in the portfolio.

As far as individual holdings, Brazilian stocks have been the largest contributors to the fund’s performance. Oil giant Petrobras (NYSE: PBR) is one of those stocks.

PBR has been in an up trend, tracking the price of oil and also trading higher on efforts by politicians to reform the government in Brazil in an effort to boost economic growth.

Another large holding of ILF is Itaú Unibanco Holding S.A. (NYSE: ITUB), a subsidiary of Itausa that’s also Brazil’s largest bank. This stock is also consolidating gains after a recent up trend.

The banking sector is one of the largest in the Brazilian stock market and stocks in that sector represent more than a third of the benchmark stock market index for Brazil, the Bovespa index.

According to Humberto Garcia, head of global asset allocation for Bank Leumi USA, the financial sector in Brazil should benefit from better credit quality in consumer and commercial and industrial portfolios of the banks.

“We are very bullish on Brazil as it steadily emerges from its deepest recession ever and from a wave of bribery scandals that introduced uncertainty across industry sectors,” Garcia told Investor’s Business Daily.

He added, “Consumer confidence is improving and inflation is under control at under 3.5%, so people are out buying. Purchases of autos and durable goods were on a steep ascent throughout 2017 and reflect pent-up demand from the hard years.”

ILF also has significant exposure to Mexico. Here, the outlook is less certain with the presidential election scheduled for July 1 and NAFTA negotiations threatening to upend industry and trade with the US, its largest trading partner, according to Garcia, the Bank Leumi USA  analyst.

Still, he believes Mexico’s economy will continuing growing, expecting growth to be about 2% this year, repeating the level of performance delivered last year.

“A quick look at GDP data shows strength in machinery and equipment manufacturing, retail, transportation and finance,” he added. “Restaurants, food and beverages all seem to be doing well. After several years of increase, domestic auto sales were down in 2017, which reflects the similar downward trend in consumer confidence.

For both Brazil and Mexico, energy production is strategically important but a small part of the countries’ economies.

Garcia notes, “State-owned Petrobras produces and also imports oil for its refineries, so rising oil prices help and hurt.” For Mexico’s Pemex, which is also government owned, exports amount to only a small percentage of GDP.

Among the market leaders for the Mexican stock market is America Movil (Nasdaq: AMOV).

America Movil is the largest wireless carrier in Latin America and Mexico is its largest market. The company generates approximately 30% of its wireless sales in Mexico and has an estimated market share of 65%.

These are all stocks that can be found with a top down analysis that begins with a list of top performing ETFs.