Alternative Data: The Next Big Thing

Alternative data has recently become the “next big thing” for investors who are searching for edges and the data is now going mainstream.

Bringing Alternative Data to the Mainstream

Founded in 2012, Quandl is used by eight of the top 10 hedge funds and 14 of the top 15 largest banks. Quandl delivers financial, economic and alternative data to over 400,000 analysts worldwide.

Quandl has also established strategic relationships with many leading data providers to provide institutional and Main Street investors with access to a growing library of data to inform research and trading / investing decisions.

In assessing the overall market opportunity for alternative data across the financial industry, in November 2017, Deloitte estimated that spending on alternative data may exceed $7 billion USD by 2020, with an annual growth rate of 21 percent.

Barron’s recently looked at this situation from the perspective of an individual investor.

The sheer volume of data available today, and the price of obtaining it, can be overwhelming for investors unfamiliar with the field. Gaining a quant-like investing edge by examining credit cards or location-tracking apps can mean writing a big check, with no guarantee of success.

Most credit card data starts at $10,000 a year, according to Quandl, a marketplace for alternative data.

Ashby Monk, a Stanford University academic who has studied how funds use data, says that the best way for most investors to use alternative data is as a risk-management tool rather than as an idea generator.

“It’s a smart way to begin to dip your toe in the world of alternative data and not get caught up in the arms race,” Monk says. “Think of this as a risk tool to help you better understand your portfolio and the assets you’re investing in, rather than trying to spot some trade that you want to make.”

Michael Recce, chief data scientist at Neuberger Berman, uses only about five major sets of data and buys them on a delayed basis, a tactic that allows him to pay as much as 90% less for the information.

He’s willing to have “old” data because it’s meant to complement, not replace, the fundamental-investment process. “If you care about long-term capital gains, you don’t care if it’s one month old,” he says. Recce uses job-posting, online-shopping, and credit-card data.

For do-it-yourself investors, e-brokers have begun expanding their alternative data offerings, too. TD Ameritrade allows people to access the social-sentiment app LikeFolio in their trading accounts.

Sentieo, another start-up data provider, offers tools that combine alternative and traditional data on its platform, which costs $500 to $1,000 a month.

Sell-side firms—bankers, brokers, and research shops that analyze and market investments—are also stepping in to guide investors through the minefield.

The buy side—asset managers—tends to be “massively ahead” when it comes to new investment trends, but this time “we’re starting from a similar point as our buy-side partners,” says Dan Furstenberg, global head of equity hedge fund distribution and head of data strategy at Jefferies.

For fund managers worried that they have already missed the data boat, he says their concern is misplaced.

Only about a quarter of managers Jefferies surveyed last year were high-volume users who look at more than 50 data sets. “For traditional portfolio managers, it’s incredibly early,” he says. “We’re in the first inning.”

Veteran asset managers may not be keen on using the data, but it’s likely to become a must-have for the next generation. “It’s really hard to transform the very discretionary process of a 50-year-old portfolio manager,” says Leigh Drogen, the CEO of Estimize. 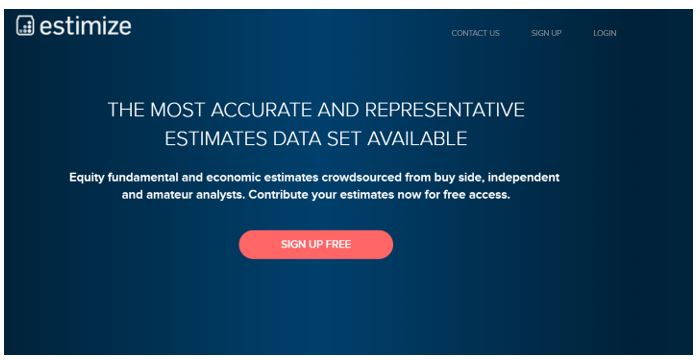 “They know that they just have to hang around another 10 years and collect money. They don’t want to go learn [programming language] Python. The 30-year-old at that fund knows they’re not going to have a job in 10 years if they don’t learn it.”

The people most at risk from the shifting trends could be traditional sell-side analysts, argues Daniel Goldberg, the founder of consulting firm Alternative Data Analytics.

“You’re going to get more money going to analytical tools than to sell-side research,” he says. “Data will be the new consensus estimate. Instead of the sell-side providing estimates, the data will do that every day.”

As a starting point, individual investors could turn to Estimize or considering searching through the Federal Reserve data base for free. Fred Economic Data is available here. For example, here investors can find data on Italy’s unemployment rate.

On Fred, investors will actually find 2,613 data series on Italy. That data can be combined with data from the United States and could include a limited history of stock market data. Using this capability investors could search for data that leads market turns.

Fred data can also be exported to Excel for more detailed analysis. This is a rich source of untapped data in many cases. The site actually contains more than 528,000 data series and new data is being added quite often.

Maybe earnings data was never enough to earn big profits but it seems that it is more difficult today. It could pay for individual investors to wade into the study of alternative data with Fred.